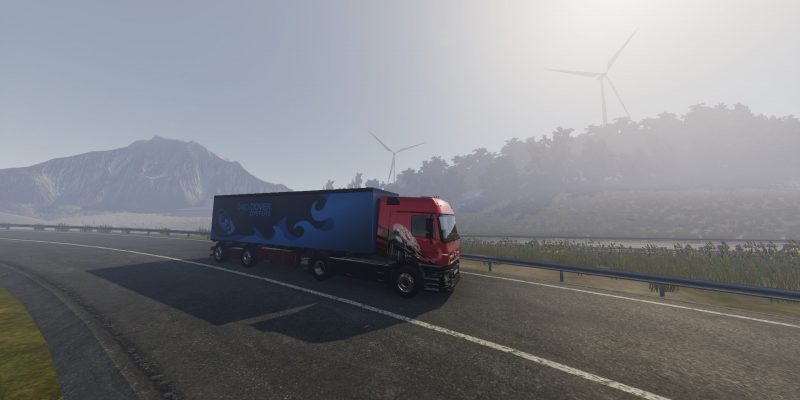 Truck simulators have been around for quite some time now, growing into a reasonably established sub-genre of driving sims. A big part in its rise to popularity has to do with the extensive work conducted by SCS Software’s 18 Wheels of Steel franchise, which has now grown into Euro Truck Simulator 2 and American Truck Simulator. With the world of truck sims basically cornered, it was very interesting to see Soedesco try to break in with its new entry Truck Driver. Initially, Truck Driver was a console-only title. But, after spending just under a year on console, it’s now available on PC.

I had no choice but to draw comparisons between it and the extensive time I’ve spent with SCS’ aforementioned sims. In the honor of summertime, let me phrase this comparison like this: if SCS’ sims are gourmet burgers, then Soedesco’s Truck Driver is kind of like a Big Mac.

Truck Driver takes place in an unspecified, seemingly European map. You play as a new trucker who has inherited their first truck from their dad. On this map, there are six big specialized businesses that require trucking services. You will communicate with each business owner for jobs. Therein lies my first big gripe with Truck Driver. 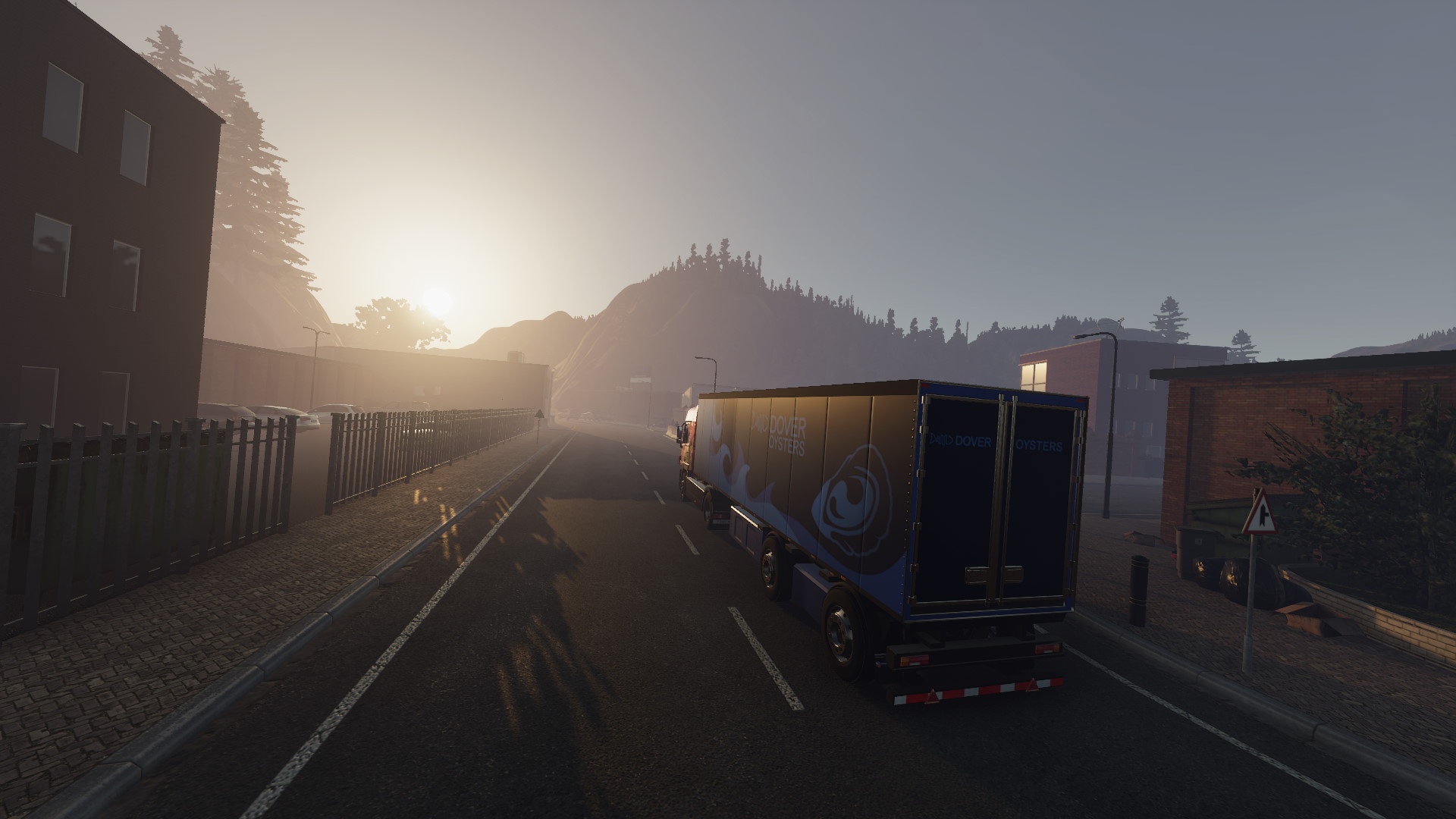 While driving is, of course, the main attraction of the whole experience, it often feels like it’s used as padding here in the “sim.” The distance between each of the businesses is pretty spaced out. Once one job is completed, it takes a few minutes to then either drive to another business or back towards the one you just completed a job for.

What makes this even more annoying is the fact that all of the communications with the businessmen is done via a corny RPG-esque dialogue system, which always happens by means of instant messages. With this being the case, I can’t see why there isn’t simply a phone menu to select new missions from, which would greatly cut down the constant back-tracking.

Another poor design choice is that you never know the distance you’ll need to drive until the mission is accepted. It can sometimes take a minute, and it can sometimes take five. You also won’t know what your pay is until a job is complete, so you can’t prioritize missions to get the best rewards. The one bit of consistency is that as you accept more jobs from each of the businessmen, the jobs will very gradually get longer and have slightly better pay. 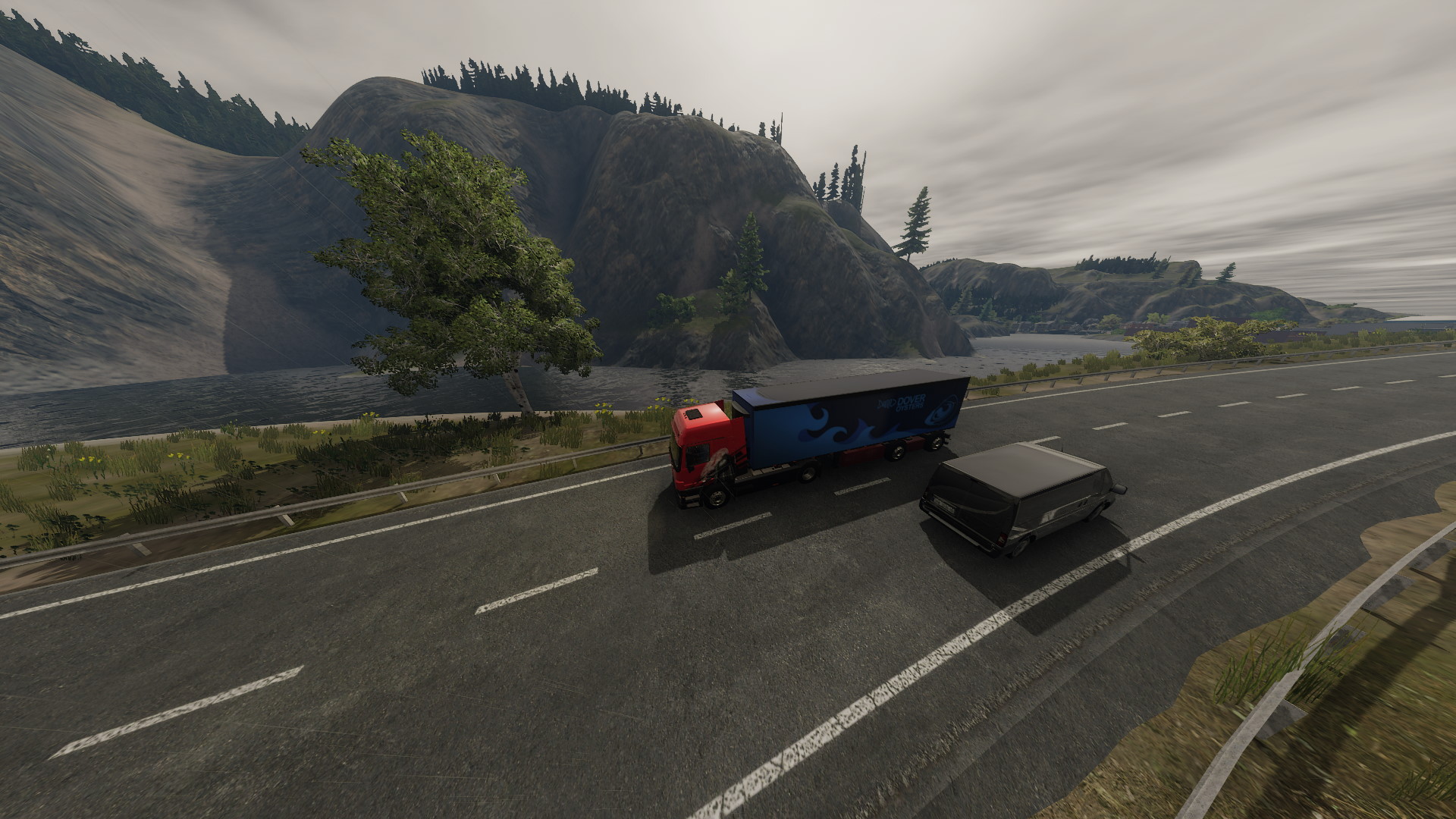 No risk or reward

Rewards are also earned from general gameplay, which allow you to upgrade skills. For example, there’s a Safe Driver skill that increases the more you drive without any incidents. It nets some extra XP to level up your driver and provides cash to buy upgrades, customizations and new trucks. But, a lot of the rewards don’t really add much to the overall experience.

The incidents that you can get involved in have little to no consequence. Your truck is supposed to accumulate damage, though the damage meter doesn’t seem to change. However, if you go to a Garage after a crash, repairs will be displayed. Your truck’s model will also have some subtle dents, though these same visual indicators occur both after tiny benders and big crashes, making the effect useless.

Customization is cool for aesthetics, but some of the upgrades have such a negligible advantage that these seem pointless. Not to mention that the actual driving mechanics, or lack thereof, make upgrades seem even more superficial.

Your starter truck can accelerate pretty quickly both with and without a trailer. Turning is smooth and easy, regardless of what cargo you’re carrying. The same goes for when ascending a hill. All of this is very unrealistic. Crashing into another AI vehicle feels like pushing over plastic toys. True, a big semi will push a car out of the way, but not as effortlessly as portrayed in Truck Driver.

Ultimately, the driving experience feels the same no matter what. Visiting a Garage doesn’t even seem necessary. Not to mention that despite there being multiple Garages throughout the map, only the first one nearest to where you begin the game is open to you. All of the others need to be purchased to be used, but there’s no indication of that. It’s yet another example of an odd omission, and the list doesn’t stop here. 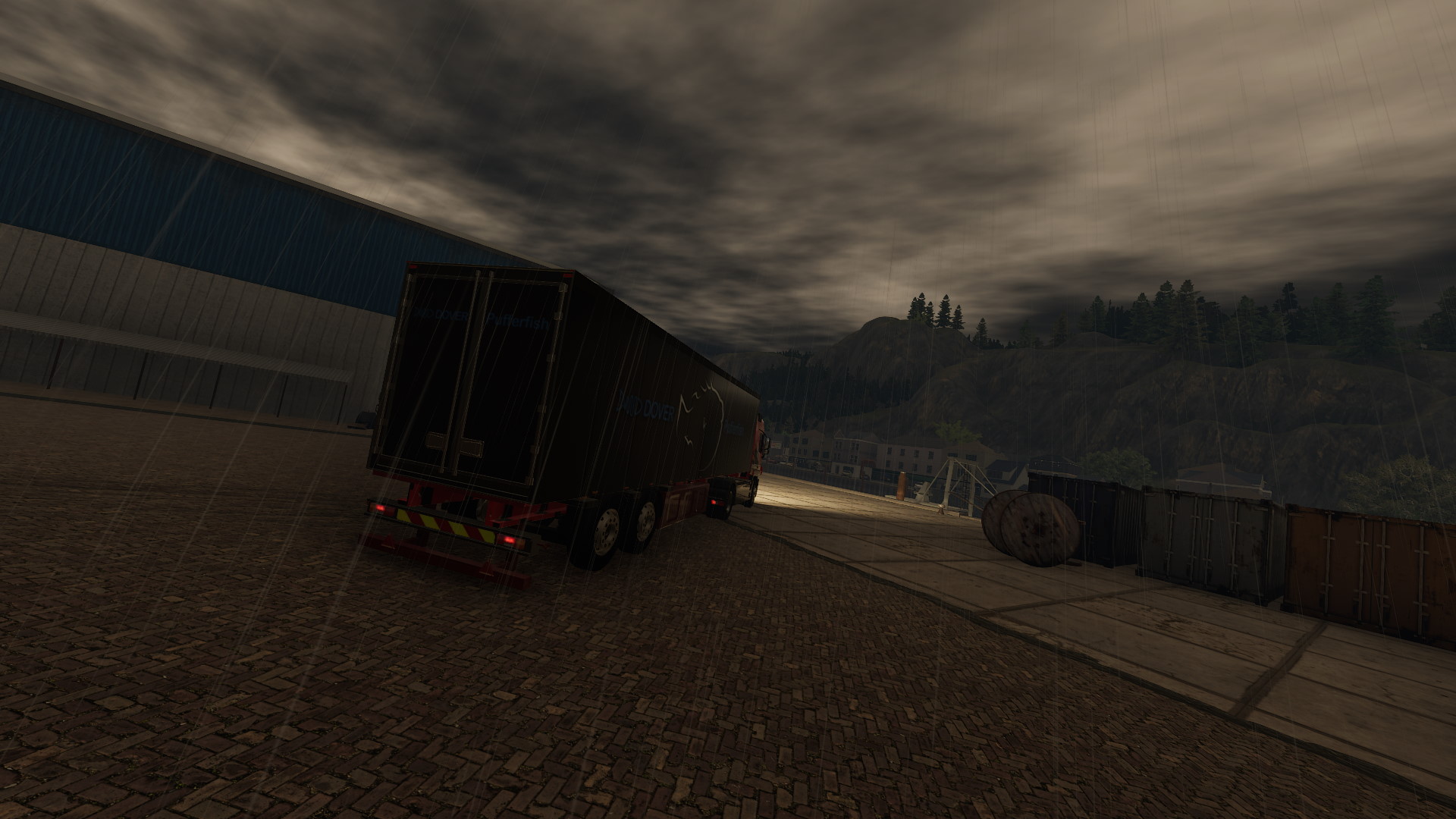 Sidenote: hope you like rain, because Truck Driver has *lots* of it.

A road of potholes

Aside from Truck Driver not having any decent physics, the aforementioned AI is also just plain annoying. They drive too slow, and are horrible at maneuvering through intersections. If not crashing into each other, they take too long to decide where they want to turn.

I’ve literally sat behind cars shifting their blinkers from side to side with clear opportunities to turn. Traffic lights also shift too quickly. This can result in just one vehicle passing through an intersection at a time. Speaking of which, running a red light is basically the one traffic violation you can get. Speeding, driving into oncoming traffic, and getting into an accident will net you zero consequences, as there’s no police presence whatsoever.

Even the presentation of Truck Driver is flawed. Despite being a “sim” from 2020, it merely looks passable. It’s not bad, just okay. The fake intensive light from the sun and imitation volumetric clouds can make it look pretty sometimes, but certain effects come off as being really basic, particularly in the sound department. The engines of the trucks sound phony, and the general ambient soundscape is lifeless.

You’ll hear the generic wind and birds chirping, but driving past different things makes zero difference. For instance, you can’t hear the water when driving past the sea, or the sounds of heavy machinery when at the docks.

Even just subtle sounds like the wheels rolling over different surfaces are missing. These seemingly insignificant details aren’t dealbreakers, but when they’re missing altogether at once makes their absence just that much more noticeable. The one good thing here is that Truck Driver loads very quickly and requires very little to run, but that isn’t saying much when the overall experience lacks depth. 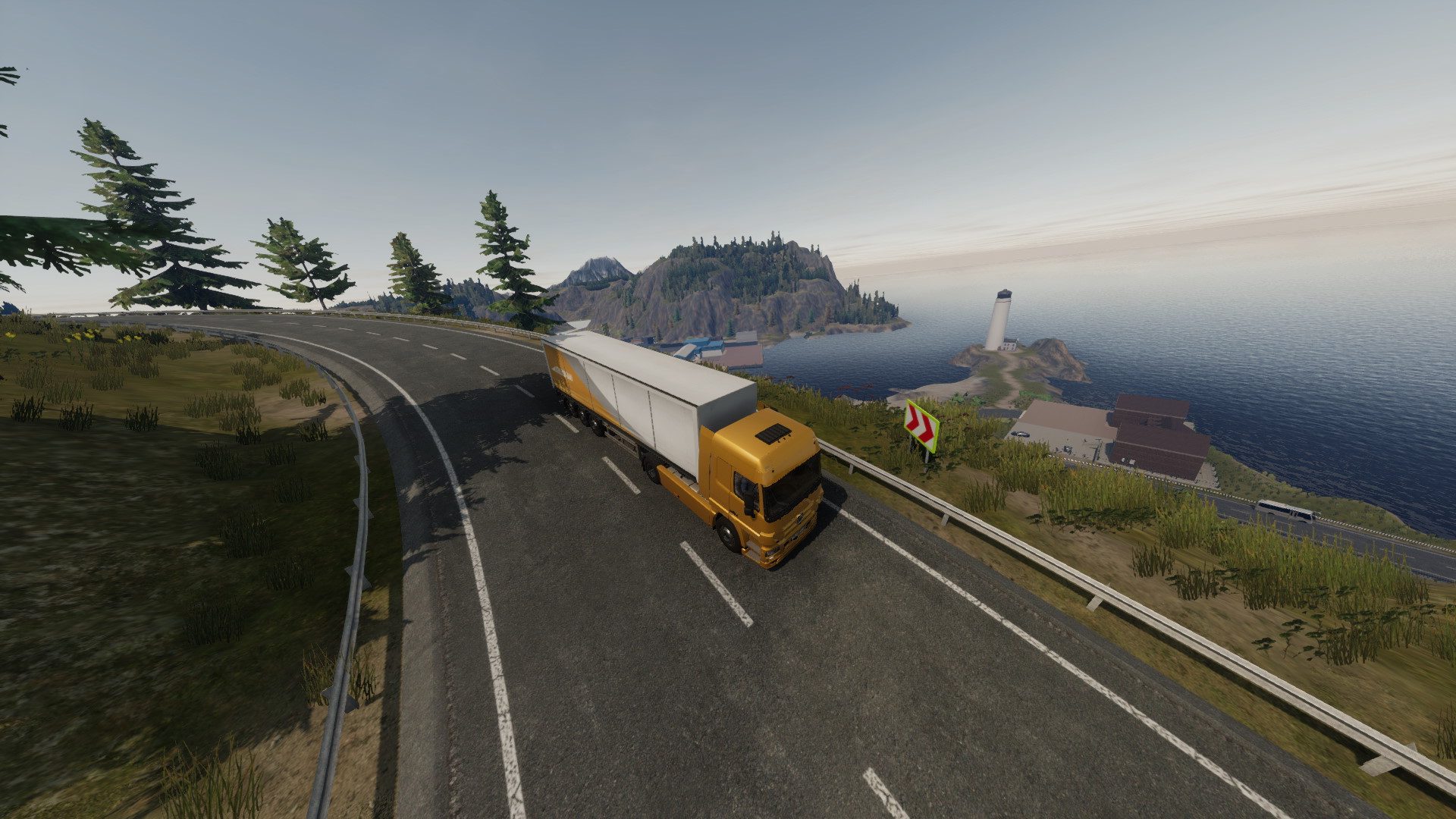 Whether or not Soedesco intended to take on the likes of SCS is a moot point. Truck Driver was going to be compared anyway. Considering that those titles have been out for several years, and have gotten better with age, it’s confusing as to why Soedesco would opt to try and break into the market with such a basic product.

When I reviewed this “sim” on Switch a few months ago, I walked away feeling mildly pleased. So, why am I giving it such a hard time now? Because, again, PCs have enjoyed these sorts of sims for eons now. The genre never took off on consoles, so there was nothing to compare it to. But here, you have a choice, and the better one is obvious.

To bring back the burger analogy, Truck Driver looks like ETS2 and ATS, but it doesn’t “taste” anywhere near as great, so to speak. If it were food, it would be edible, but not enjoyable.

That’s why I’ve been putting quotation marks around the word “sim” throughout this article. This is not a sim, it’s a game. And if you look at it even from that perspective, it’s still pretty vapid. While this is nowhere near shovelware territory, in some ways it feels even more limited than the older 18 Wheels of Steel titles.

With so many details both large and small missing, the best I can recommend this to are folks with up-and-coming little simmers to get their feet wet with. Its simplicity really can only be enjoyed by players like that. Otherwise, by every means, go for SCS’ selection. And since those are always on sale anyway, you should be able to pick those titles up cheaper than the $30 USD Soedesco wants for Truck Driver. 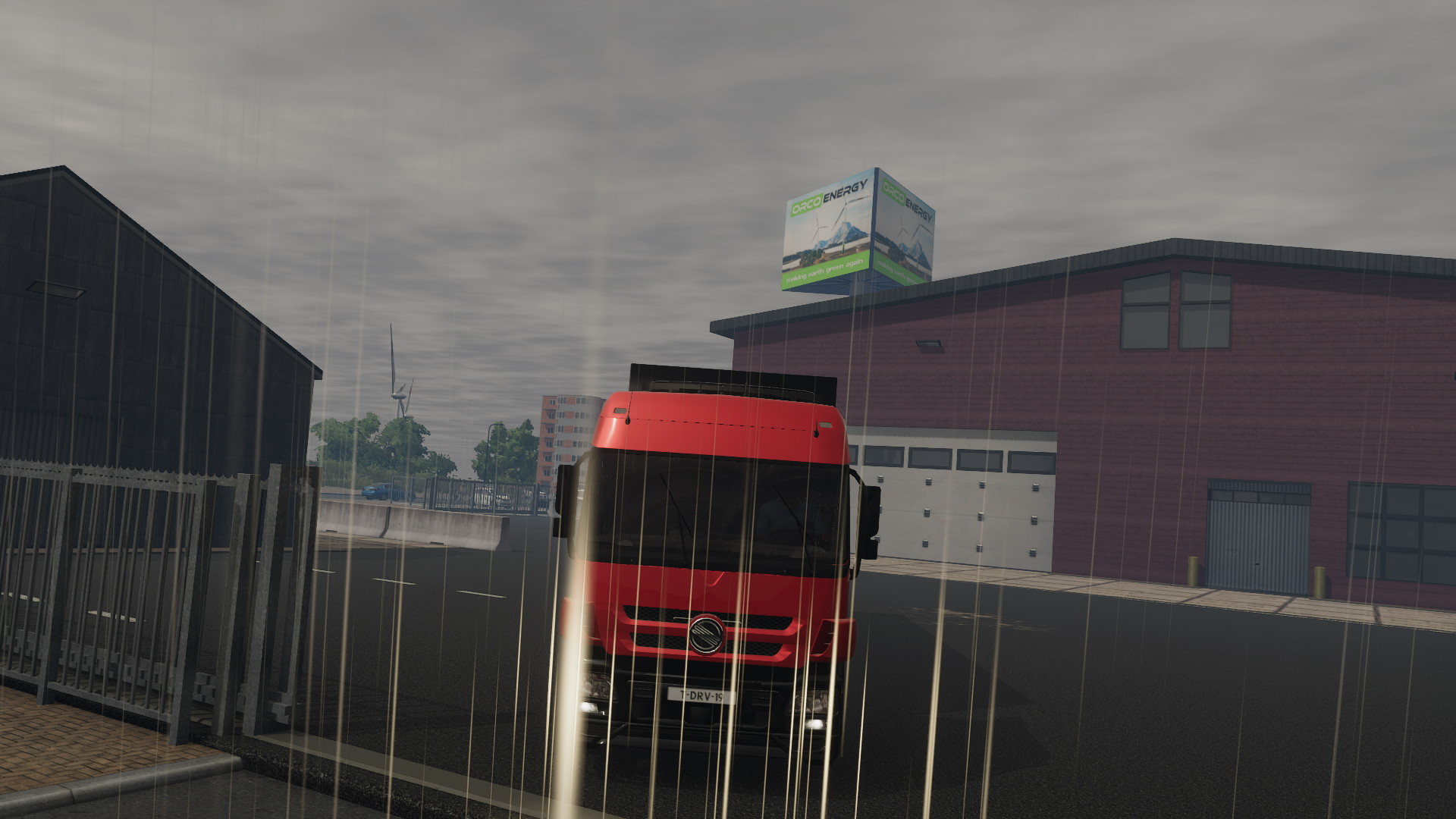 With Truck Driver, Soedesco is trying to break into an already spoken-for market with an offering that comes off feeling like a cheap imitation. While it spares itself the humiliation of being considered shovelware, it also lacks the heart needed to call it an actual truck simulator. Perhaps a second, stronger entry can prove the new IP's worth, but this is a pretty weak first impression.