Solid-state drives (SSDs) have been around for a while now, but they’ve certainly become more commonplace over the course of the last few years. Now that you’ve finally gotten your hands on one, it’s time to let your game collection take advantage of its faster data transfer speeds.

It’s simple enough to install a game to a new SSD that isn’t already installed. But what is the easiest way to transfer games to an SSD, if they’re already installed on a different hard drive?

That’s exactly what this guide is for. Of course, you can simply drag and drop. However, there are two other ways to move games you might not know about — you can do it through storefronts.

Method 1: When downloaded from the Microsoft Store

For Windows 10 and Windows 11 users, there’s a built-in feature in both versions of the OS that allows you to seamlessly move installed software from one drive to another. The only caveat is that this is only compatible with software that’s been downloaded from the Microsoft Store (which includes games from Xbox Game Pass). 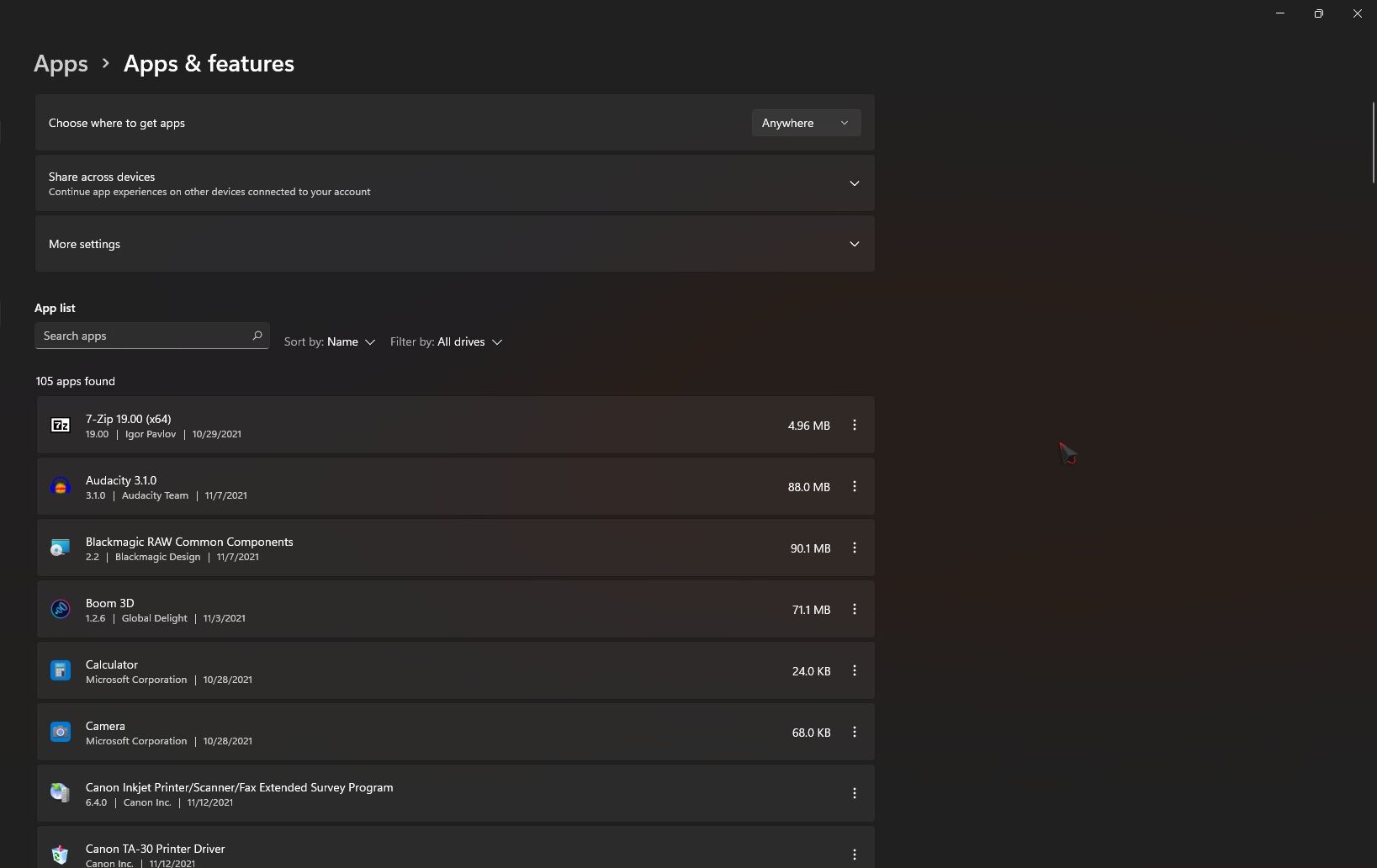 1. To perform this operation, you simply navigate to your Apps list, which is in the Settings menu. 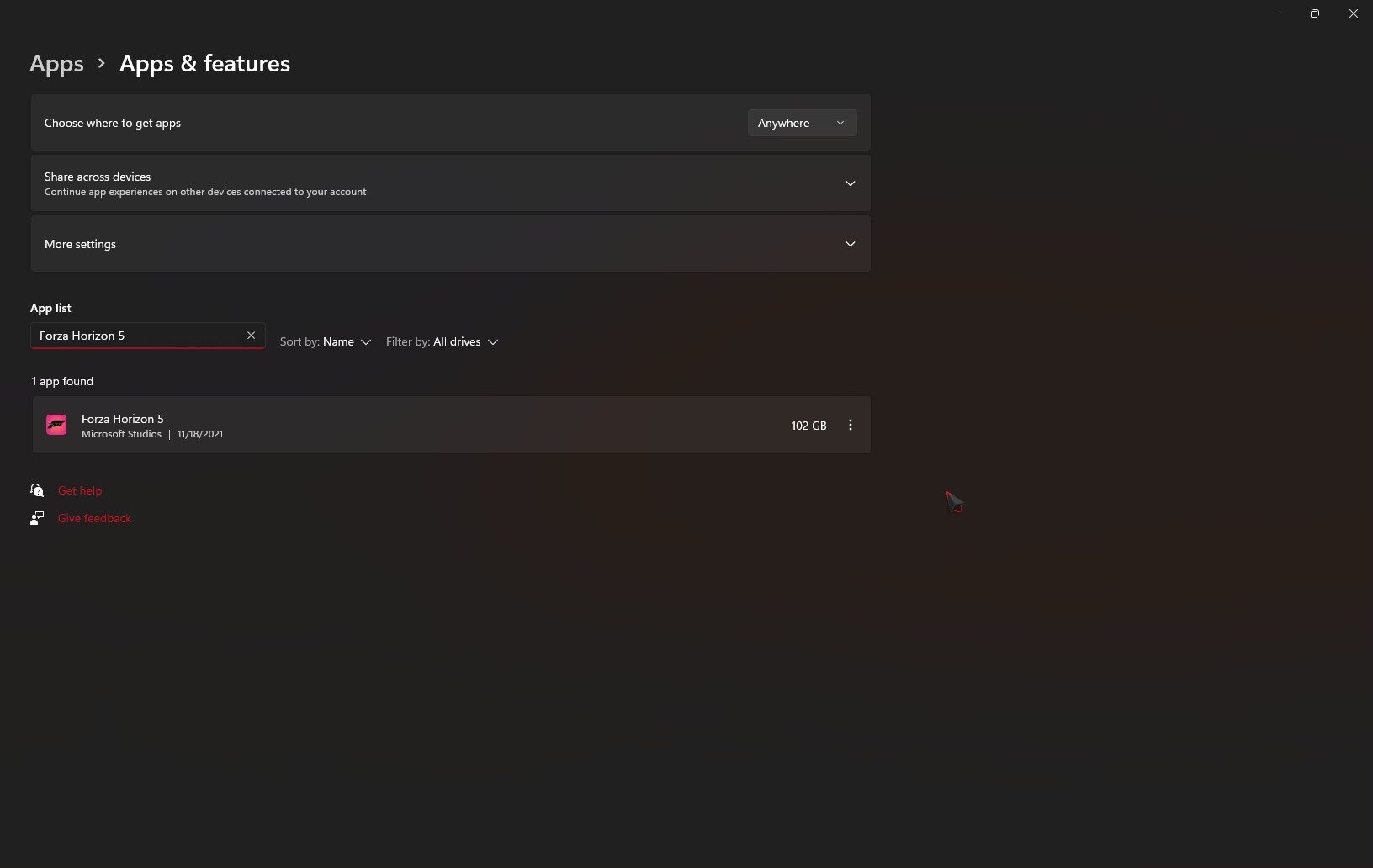 2. Once here, either scroll down the list or type in the name of the game you would like to move. In this case, let’s use Forza Horizon 5 as an example. 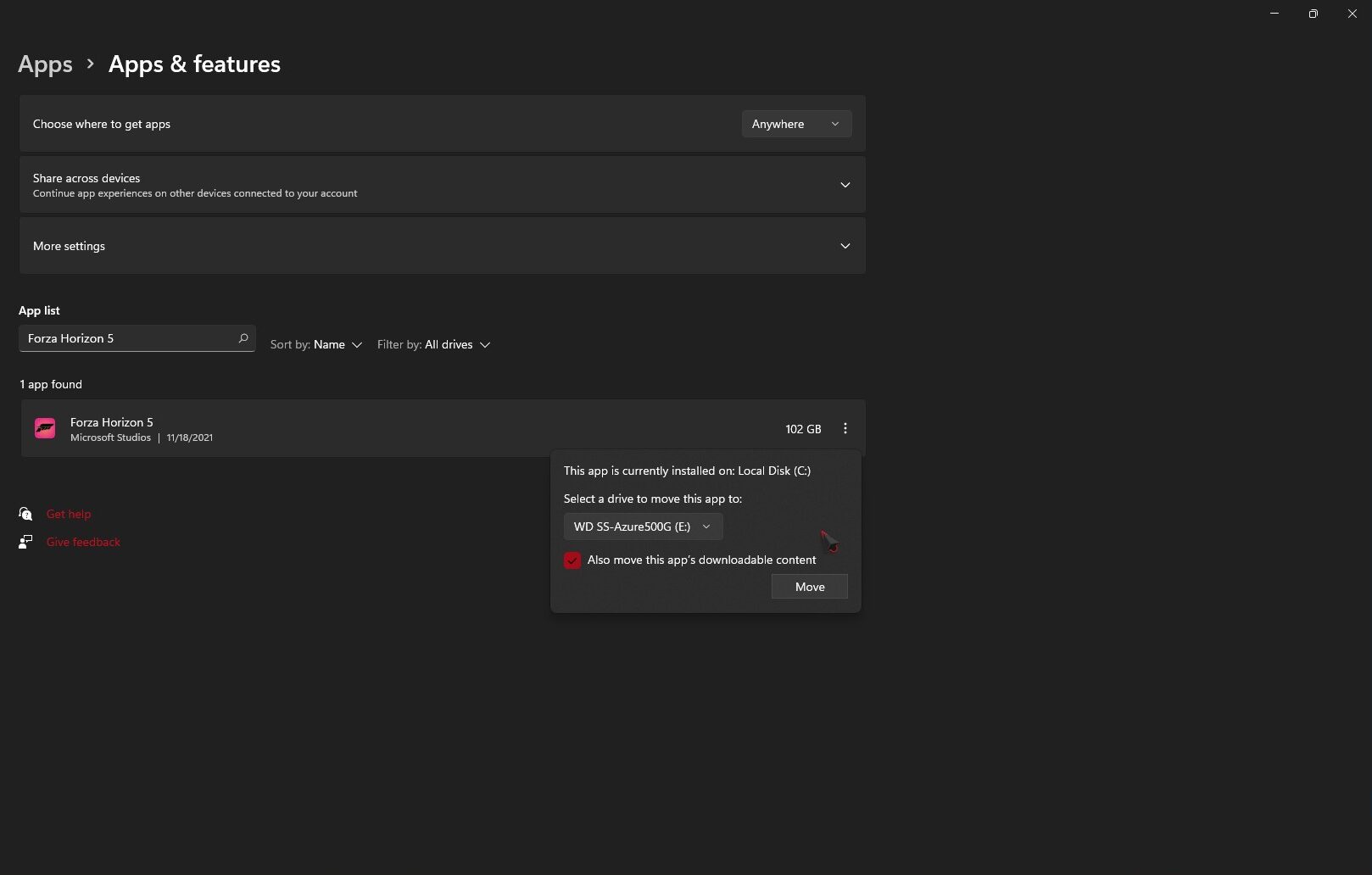 3. After locating the game, click the three-dot icon to the right of the title to display more options, and then select “Move.” It’ll then display a new sub-menu, which tells you what drive the game is currently installed on and gives you a list of your other drives that you can send the game off to. You can minimize the window while the transfer process is taking place. When it’s complete, it will briefly say “Moved” and then the status bar will disappear.

Even though the previous software mover is only available for native Windows apps, Steam circumvents this by having a built-in game mover of its own. When you have multiple drives, Steam allows you to create multiple libraries, thus allowing you to store and run games on several drives at once if need be. Here’s how to access it. 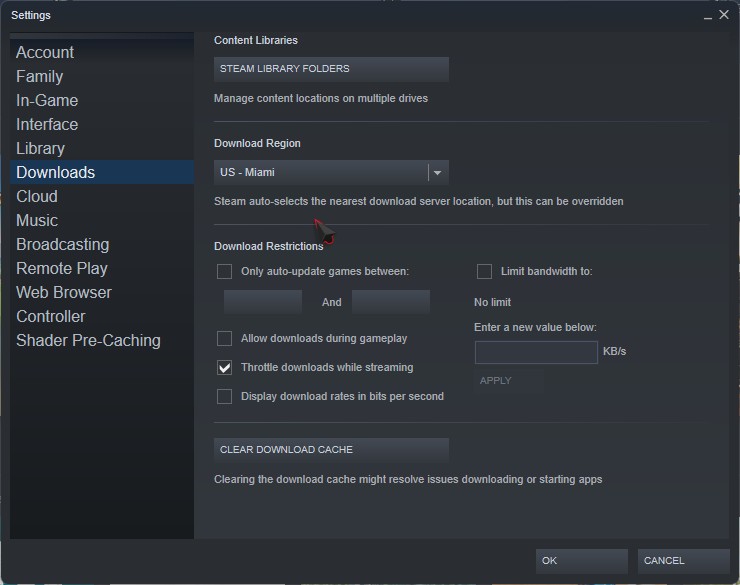 2. Once there, navigate to the “Downloads” tab and then click “Steam Library Folders.” 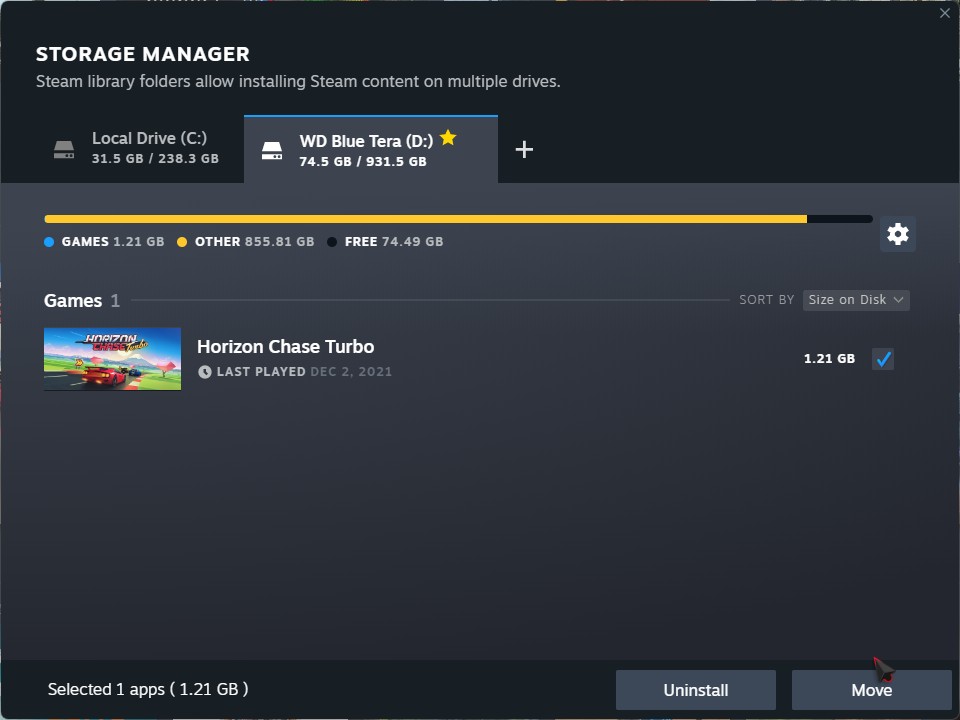 3. Assuming you’ve already created a separate folder on your new drive (if you haven’t, just click the “+” button and quickly set it up), then find the game you want to move, press the checkmark on the right side, and then select the “Move” button. 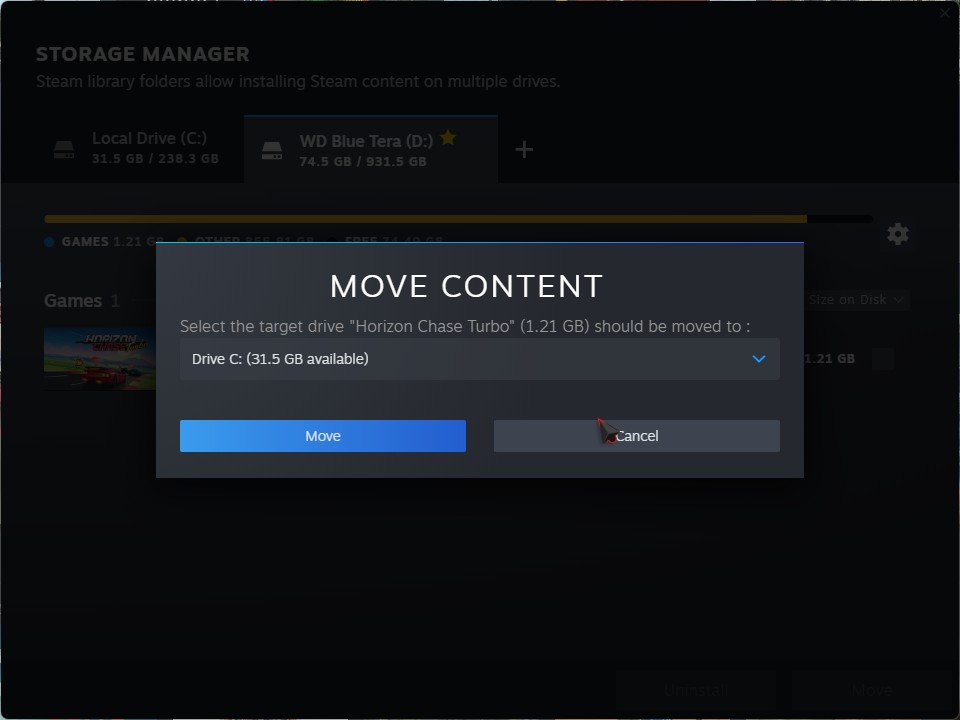 This will bring up another menu that’ll ask you which drive you’d like to send your game to. Select the library of your new SSD and then wait for the process to complete. 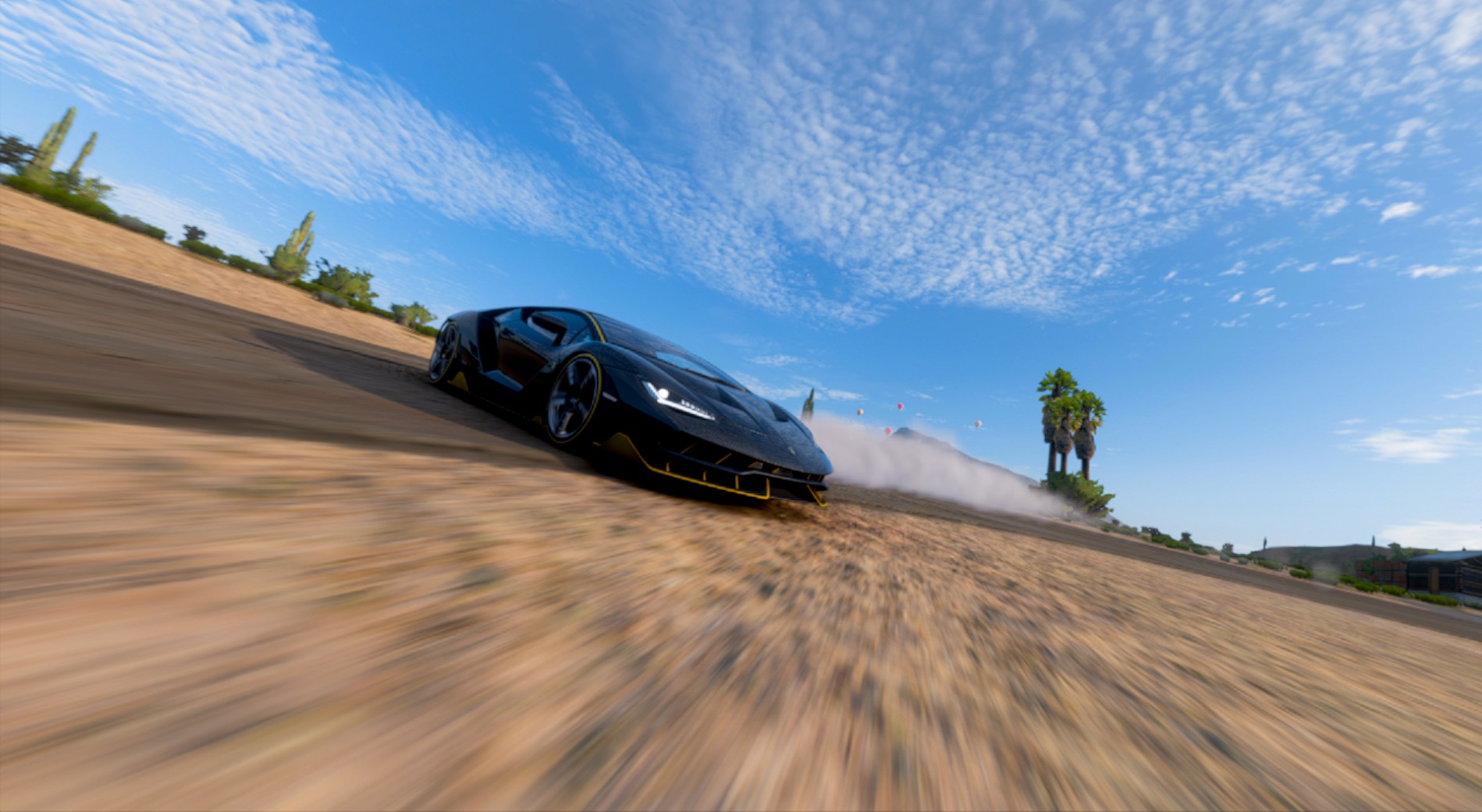 No matter which of these methods you end up using, the flexibility of having your game library between different drives is an asset. For larger, expansive titles like Microsoft Flight Simulator and Forza Horizon 5 that have a lot of data to load, putting them on an SSD is practically essential for a truly smooth experience. In fact, the system requirements for both titles highly recommend using an SSD. Older/smaller games can be regulated to your HDD without much fuss.

As SSDs become more commonplace in the industry, their prices will gradually decrease. So, sooner rather than later, they’ll finally become a staple part of the experience.

Ubisoft is bringing NFTs to its games, starting with Ghost Recon Breakpoint