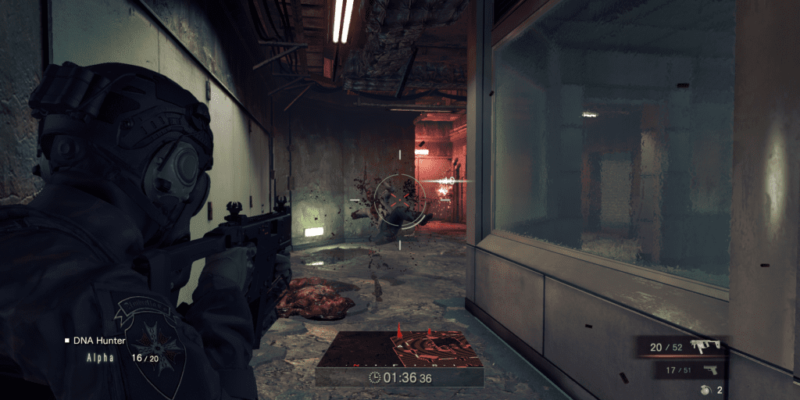 Thanks to the unwelcome return of a persistent AMD driver bug causing 380/380X cards to crash to black screens in certain games, I’ve had a hard time playing Umbrella Corps on PC for any extended periods of time. This is the first time I’ve been hit with the bug in several months (probably Assassin’s Creed Syndicate around January or so), but it came back with a vengeance for this release. Reverting to Crimson 16.5.3 from 16.6.1, alas, did not help.

That’s all on AMD rather than Capcom or Umbrella Corps itself (at least, as far as I know); but it does mean that this overview of the PC version is going to stick to the technical side of things, and be particularly light on gameplay impressions. This is a multiplayer-focused title, and it’s not exactly reasonable for me to show up for matches and then crash out after ten minutes.

What I can still look at is how well this Resident Evil branded affair has made the transition to PC. It has some pretty substantial problems, which we’ll get to in due course. But let’s start by having a look at the graphics options. Click on any of these to make them larger. 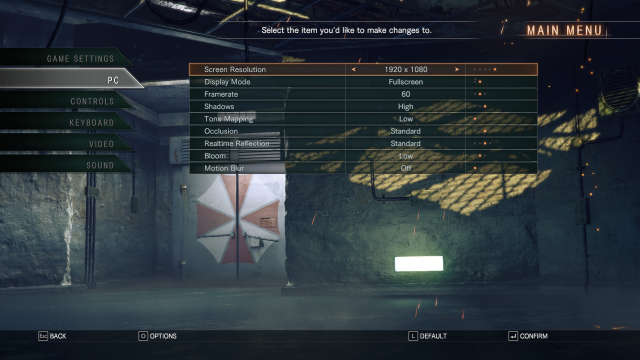 Display mode offers you fullscreen or windowed (no borderless windowed here Update: ‘fullscreen’ may actually be borderless windowed; see comments below the article), while the frame-rate can be capped at 30, 60 or left as ‘variable’. This latter option is as good as its word, uncapping the frame-rate and leaving its upper limits to the powers of your imagination (or rather the power of your PC). That gave me a slightly frightening 800+ fps on all the loading screens, so I put it back to 60.

Here’s a comparison between the lowest and highest settings in Umbrella Corps. The most immediately noticeable difference is the shadow quality. 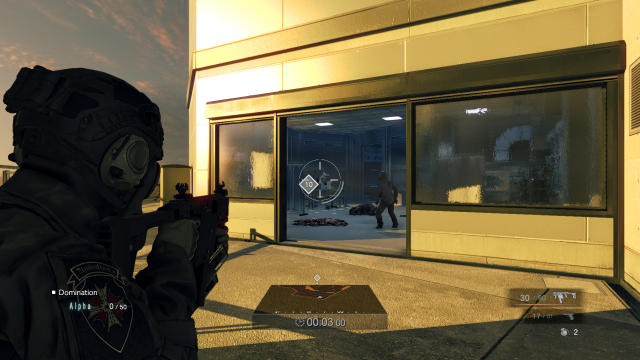 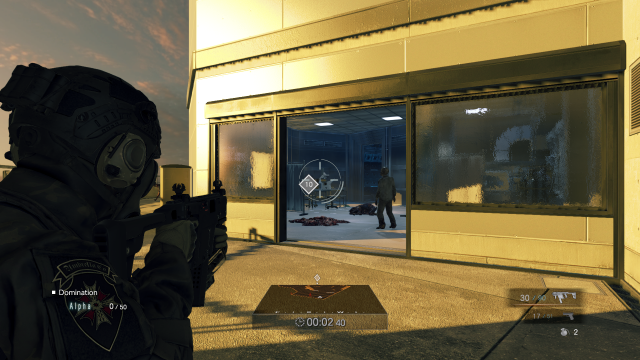 No matter what you tweak in the options though, you won’t be getting away from a few lovely textures like this one.

I mean sure, my nose is on the wall here, but yikes.

My i5-6600 / 16GB RAM / 4GB 380X machine couldn’t manage a solid 60fps with everything maxed out, but seemed to hold it the vast majority of the time with a couple of things turned down (the graphics settings image up there has the options I settled on, although the constant black screening made consistent testing a little awkward). A patch released on 22 June appeared to boost performance too, though, again, my testing was a bit erratic so don’t take that as gospel.

Anyway, on to the controls. Here’s what you’re dealing with on keys (which can be somewhat redefined, but certain buttons like Ctrl are forbidden for some bizarre reason), followed by the mouse sensitivity and (boo, hiss) auto-aim options. 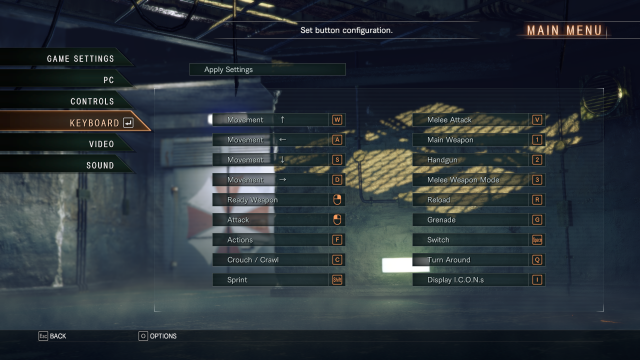 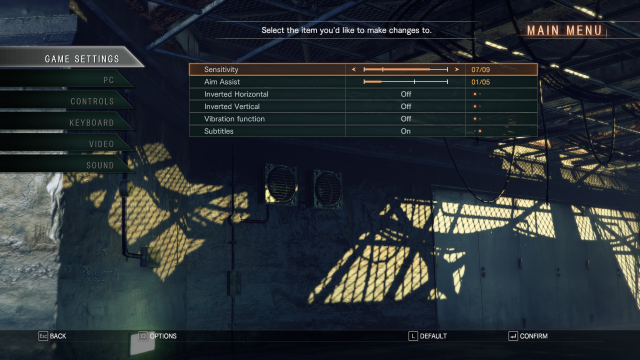 Umbrella Corps’ mouse controls are an atrocious, analogue-input-simulating mess. Even with the sensitivity all the way up, the Z (diagonal) movement axis is horrendously sluggish. The aforementioned patch may have slightly improved that aspect, but that could just be some kind of weird placebo effect. Basically, the mouse controls are trying to poorly simulate a gamepad instead of, oh, I don’t know, functioning like a mouse. This feels terrible and isn’t excusable.

Your basic 360 gamepad is an option too of course, but this is a shooter so I’d imagine most readers will be gravitating towards mouse and keyboard. Apparently Umbrella Corps doesn’t like Xbox One controllers on PC. I don’t own one, so I’m afraid I can’t test that. 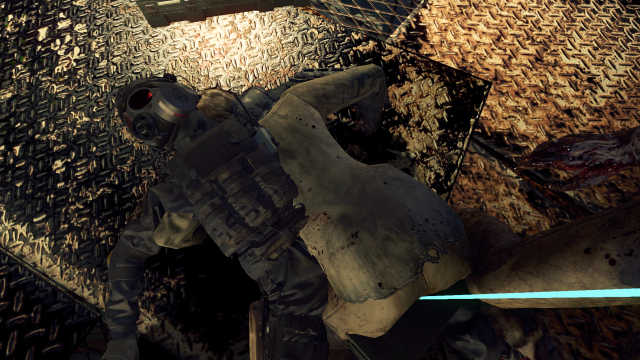 I also can’t really explain this.

While the mouse problems obviously don’t help, the ‘feel’ of simply moving your soldier chap around is also really rough. Animation transitions are pretty awful. When you aim down the gun, it feels like your soldier is ushered off-screen by a stage-hand while another helpful assistant pushes up a gun from the bottom of the screen. I sincerely doubt that’s what actually happens, but it’s very weird and almost makes aiming from the hip and aiming down sights feel like you’re controlling two different weapons held by different people.

There’s also the matter of the (unalterable) Field of View, which has your soldier man taking up a good 40% of the screen at all times. Since it’s a Resident Evil spin-off, I suppose you could argue this is an effort to up the tension of your surroundings by preventing you from seeing about half of them, but it mostly comes off as irritating. 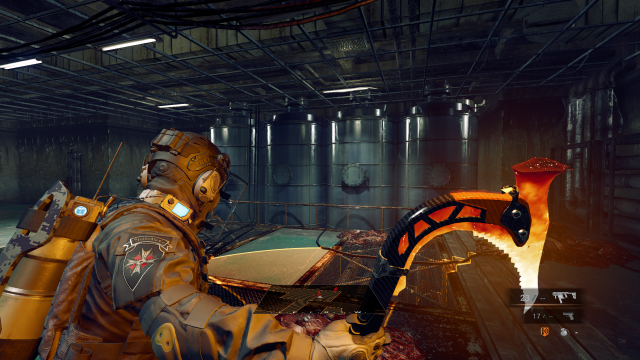 Mate, seriously, you’re taking up half of the screen here.

Technically speaking, it’s in a slightly better state than when it first launched. Performance (while probably not quite where it should be) appears to have improved. In other areas, the Umbrella Corps port comes close to doing an acceptable job. Keys can be semi-rebound, there’s at least a smattering of graphics options to tweak, and you can uncap the frame-rate to take those digits into the stratosphere if you desire. But the mouse controls are horrendous, the FOV is appalling (albeit possibly by misguided design), and some of the texture work and animations come from the budget end of the spectrum. Launching a multiplayer shooter on PC with lousy mouse controls and optional auto-aim is never going to win you any plaudits.

Umbrella Corps’ most concerning problem, though, is that it’s a new multiplayer game on PC with a peak player count of (at the time of writing) about 400 people. That doesn’t bode well for any longevity, especially with the Steam Summer Sale event in full swing. I’ve not played nearly enough to be able to comment on whether we’ll end up lamenting this one as a lost multiplayer classic, but it’s presently suffering from a distinct lack of interest.

American Truck Simulator is enlarging the scale of its map