Unmechanical seems to have started life as a four-week project for the ‘Future Games’ educational program in Stockholm, Sweden. Back then it was a ten minute title that won acclaim from the program’s judging panel. One year on, developers Talawa Games have joined with fellow Swedes at Teotl Studios (The Ball) and released their project as a fully-fledged game on Steam. It’s also set to emerge on iOS at a later date.

While it’s been substantially expanded from that initial ten minute project Unmechanical is still a short game. I’m going to spend most of the rest of this review telling you why it’s so terrific, so it make sense to get that issue out of the way first. You’ll be through the game’s puzzles in three hours, tops. Maybe four hours if you get stuck a few times. Ok, potentially the rest of your life if you get really flummoxed and refuse to ask anyone for help, but that wouldn’t be terribly enjoyable for you and sounds a tad unhealthy.

No, the truth is that most will get through fairly rapidly. That’s not something I’ve tended to let affect my judgement of a game (I loved Limbo, which was just as brief), but it is important for players to know. Your time with Unmechanical will be limited, but magical. 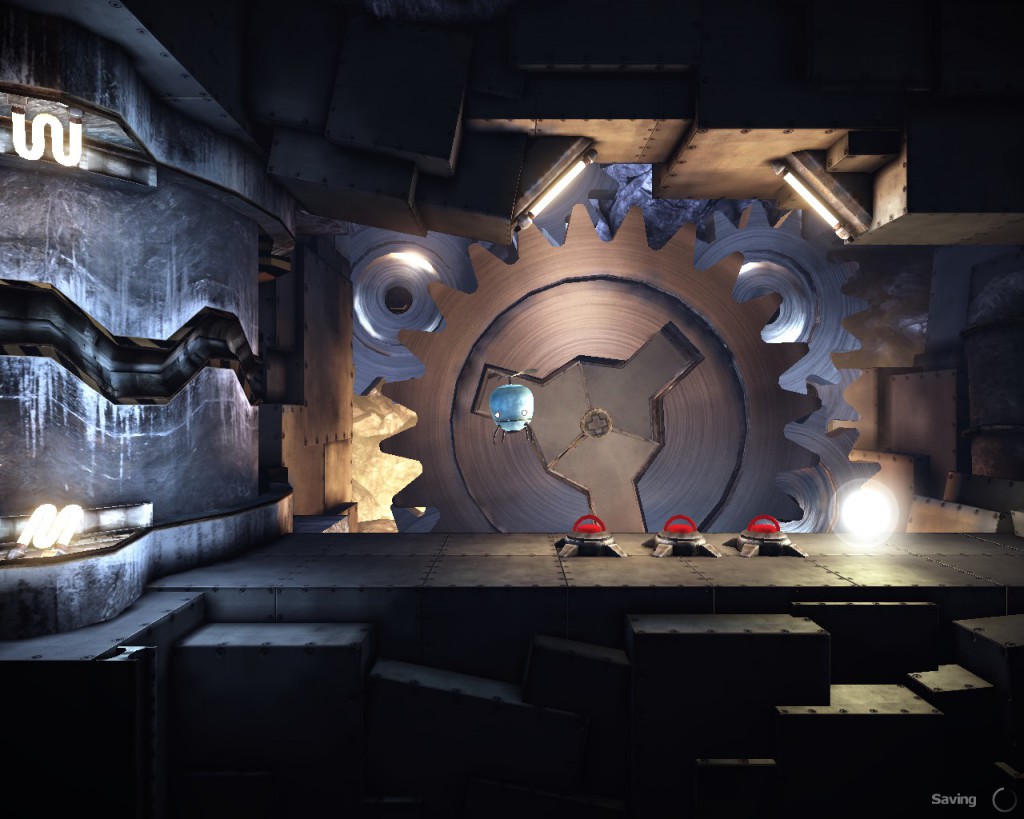 The game is a wordless narrative in which you guide an adorable hovering robot-thing with dangling wire-arms through a series of cavern-bound 2.5D puzzles. Your unnamed character (let’s call him Hover-o) is able to grasp on to items using a tractor-beam device, allowing him to carry around light objects and interact with secured mechanisms like switches.

Unlike other titles that exist in this space (the aforementioned Limbo and, to an extent, something like Insanely Twisted Shadow Planet), Unmechanical doesn’t threaten your character with death. Hover-o is never in any immediate danger, and the only time you’ll need to hurry along is during the infrequent puzzles that have a timed dimension to them (a slowly closing gateway, for example). It is, as far as I’ve been able to ascertain, impossible to screw up a solution so badly that you trap yourself. I had an early scare when I dumped a rock in some water and was unable to retrieve it, but the game made sure not to punish me for this reckless experiment.

A great deal of care has been taken over the design of each puzzle. You can sense the amount of playtesting that has gone in to each one, reflected in the clarity with which every problem is laid out (no mean feat in a game without any words). Not only do several of the barriers to Hover-o’s progression have multiple ways to solve them (in the sense of using reason, mathematics or just the power of your memory), but each tends to subtlety build upon previous skills you’ve learned. Just figured out how to pick up and drop items? Right then, next you’ll be dropping stuff onto buttons to unlock a multi-part door and using a second item for additional weight to keep them pressed down.

There are puzzles of weight, sound, memory, logic, spatial awareness, timing and even a couple of locations that require you to have a modicum of dexterity in controlling Hover-o (though not with the sort of finesse that will frustrate). Your journey through the caverns is largely linear, although there are a few areas in which you’ll find yourself having to backtrack within the locality.

Thanks to splendid helpings of atmosphere, the puzzles of Unmechanical are satisfying to solve and its underworld is wonderful to cruise around in. The game uses its Unreal engine base to fine effect, with intelligent use of lighting and a robust set of physics for Hover-o to be pushed and pulled around by. Pick up a basic rock and you’ll need to keep the ‘up’ key pressed to prevent him from slipping slowly towards the earth. Pick up something heavier, like an iron bar, and you’ll feel the effort it takes to keep Hover-o airborne. This never annoys, and adds a lot of ‘weight’ to the world; both in a literal sense, and by giving the impression that it’s actually taking a fair amount of work to solve these puzzles.

The audio is just as magnificent. Now, one man’s ‘warm electronica’ can be another’s ‘noodling twat with a synthesiser’, but as complementary soundtracks go Unmechanical’s is up there with the best. It’s quirky enough to support the bizarre sights you’ll be buzzing past, unsettling enough to remind you that you’re just a lone Hover-o separated from the world above, and delicate enough that it doesn’t push into the foreground and cause a distraction. Not that dragging it out of the background would be bad as such, but several of the puzzles rely on audio clues themselves and drowning out the winsome clanks as you bounce Hover-o off the inside of his umpteeth pipe would be a crime. 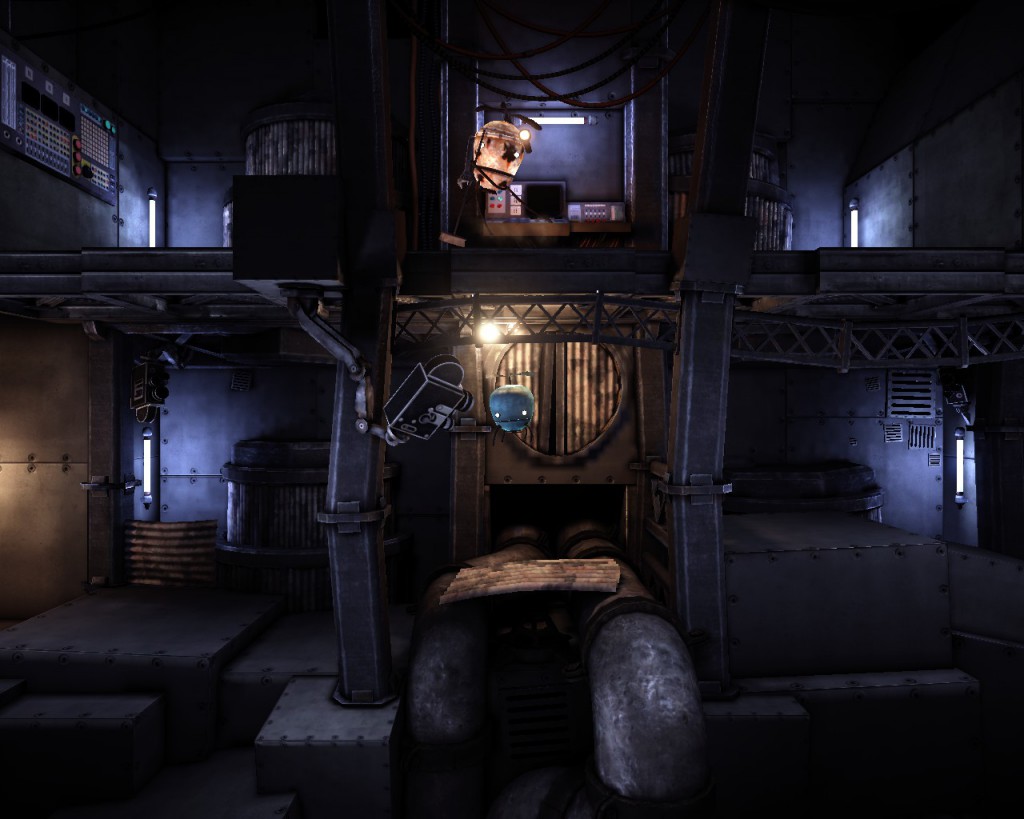 You might say that I’m impressed by Unmechanical, and you’d be right. But I wouldn’t be able to hear you because you’re over there and I’m here and in any case this review was written a while ago, so you’re too late. Problems? Ok, sure. There was one (just the one) instance of my solving a puzzle almost by accident and still not really being sure how. Both endings are quite abrupt, though do make sense in the context of the game’s enigmatic, text-free narrative. It is, as has been mentioned, short.

Or, it’s tight. It’s compact. It tells its story and dazzles you with deftly-designed puzzles of varying styles and hues, and doesn’t pad itself out with a load of crap that doesn’t need to be there. Hover-o will glide into your life, perplex and delight for about three hours, and then hover off, up and away into the skies. Remember him well. I shall.

Double Fine’s Iron Brigade is tromping its way onto PC

By Logan Broadley12 hours ago
Hardware

By Damon Apelt19 hours ago
Reviews

Chasing Static review — You are only coming through in waves