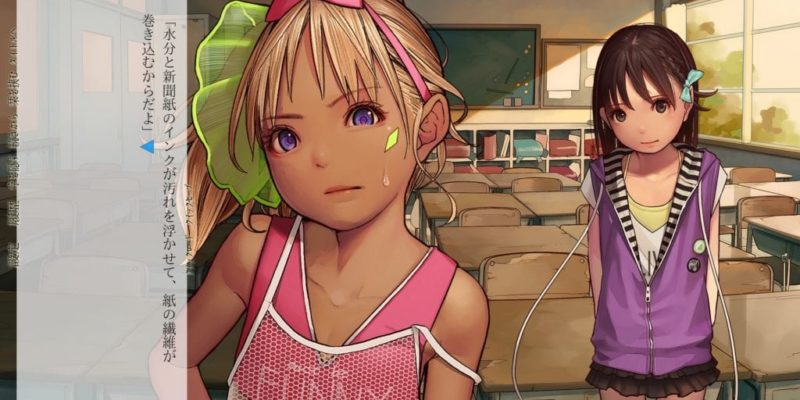 The Japanese game/novel The Key to Home has been removed from the Steam store because Valve says its “core audience is paedophiles”.

The Key to Home was described as a mystery visual novel but the subject matter appears to have struck a nerve with Valve who apparently responded to the developer on 1 December with a note to say “We are not interested in shipping this title on Steam”. The original description of the game on Steam read:

“Tens of millions of yen hidden in an Elementary school!? Lies, secrets, and underhanded tactics… Students and teachers struggle against one another. This is a mystery visual novel for every gentlemen and gentlewomen who love little girls!”

Perhaps the last bit of that sentence was not the best choice of words because Valve decided to remove the game’s store page from Steam shortly after sending the letter out on 1 December.  When queried about the store removal Valve apparently simply added, “we think this novel’s core audience is paedophiles”.

The developers have issued a statement to clarify their goals with Key to Home and address the removal.

However, since that is the exact opposite message of this game, it is clear that their decision was based on an ill informed and misinterpreted understanding of its content.

We have continually taken a strong stance AGAINST promoting crimes against children.

This stance of ours may already be obvious to those of you who read these discussion boards, but any users hinting at sexual acts with minors have been swiftly banned and we have also made it very clear to people that this title contains no sexually explicit images whatsoever.

We have continually asked Valve to inform us of any specific issues that they have with us or this title, but as of this moment we have yet to receive any clear response.

While it does have eye catching visuals, “The Key to Home” is a game that offers much more than meets the eye. This is a novel game that aims to raise social awareness of child and school related social issues through a story about four troubled heroines who, under unexpected circumstances, join forces with a young hapless teacher to fight against the evil forces that mean to exploit children.

There are no direct sexual expressions in this game whatsoever.

We make no hesitation in declaring that this game is meant not to make a negative impact on the world, but rather to make a positive impact on it by providing its players with new ideas and perspectives.

Also, this title is already on sale in Japanese stores after having been approved as “appropriate for all ages” and even has a physical disc version that has been available for several months now

Many people have already played this game and as of this moment, there hasn’t been a single complaint from any one saying that this game is aimed at pedophiles.

We are ready to answer and respond to any and all question related to this title. Also, if any areas are deemed to contain unacceptable content we are prepared to deal with them.

Valve has not yet responded to any of the inquiries we have made over these last few days.

However, we still firmly believe that valve is a company that respects the right to freedom of speech and that they will allow us to reach a conclusion through fair discussion.

The game’s art style is what you expect to see in a lot of Japanese games which doesn’t always fit well with Western tastes. There’s no doubt that some Japanese games and art push the limits of what would be considered acceptable but the developer, in this case, is adamant that they are not pushing a game that may attract unsavoury types.

Its unlikely Valve will change their mind on the listing so, for now, the game is gone. The original The Key to Home Steam listing can be seen in the web archive.