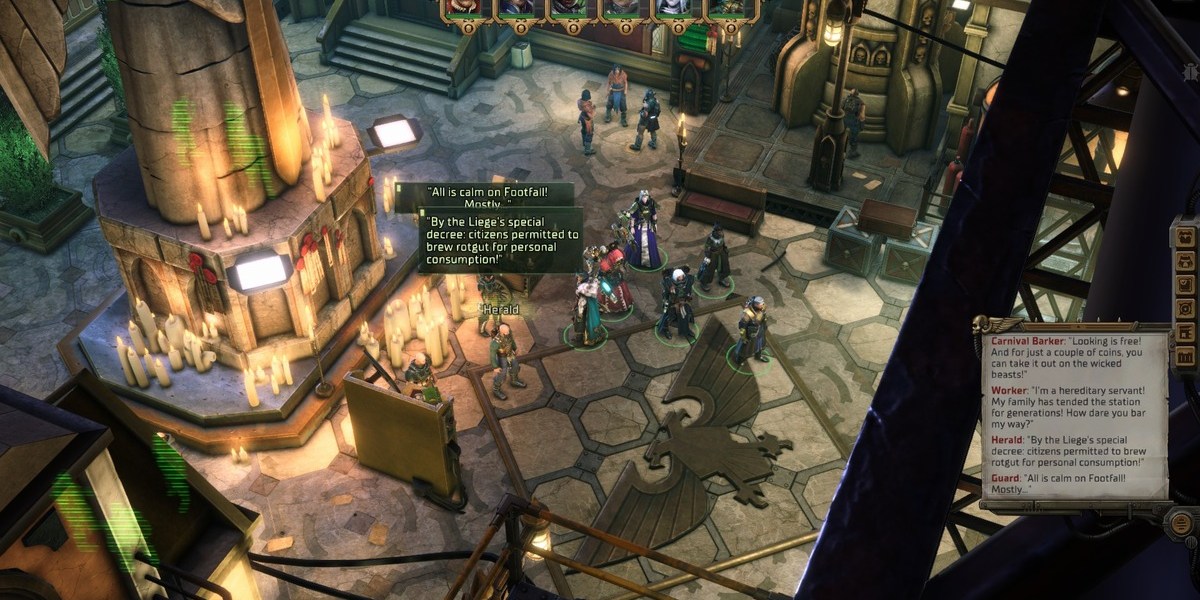 Owlcat Games managed to turn Pathfinder into a well-received series of RPGs, so it makes some sense why the studio was allowed to tackle the first real Games Workshop CRPG. Thus shedding the mists of ages that accumulated on Fantasy Flight Games’ Rogue Trader, it comes digitally reborn as Warhammer 40,000: Rogue Trader — the Alpha version of which I had the pleasure to preview.

In the grimdark universe of Warhammer 40,000, a Rogue Trader is an individual of unparalleled freedom and power. As freelancers exploring, expanding, and exploiting the frontiers of the Imperium of Man, they are allowed to transgress in ways that would otherwise be punishable by death. And your character becomes a Rogue Trader after inheriting the position from a famous relative who perished under circumstances that reek of the fell powers of the Warp. It is your task to go into the wild Koronus Expanse, reestablish the trade empire, and deal with the malicious forces that targeted your kith and kin.

On the surface, Warhammer 40,000: Rogue Trader is a fairly standard CRPG, but one with fun little details added into the mix. One of them is having split Movement and Action point tracks in battle — and under normal circumstances, attacking is only allowed once per turn, and it immediately depletes your MP. Thus far, the characters can employ up to two sets of weapons like, say, a bolter and then a pairing of a chainsword and a hand-flamer, four consumables, and their various class powers and abilities. Plasma weapons can fire normally… or you can opt for either AoE or turbodamage. Unfortunately, Gets Hot! isn’t modeled in the game. Screenshot by PC Invasion

Characters can gain Momentum, which can be accrued and eventually spent to unleash heroic powers. For example, Sister Argenta is a Soldier and thus has the heroic power which allows her — and I’m simplifying massively — to attack as many times as her weapon’s rate of fire allows. And getting to shoot four times with a bolter can wreak enormous carnage.

Partly, the reason is because Warhammer 40,000: Rogue Trader is a game developed with serious consideration of just how powerful Rogue Traders and the people who hang around them (total party size: six) are. As such, your battlefields will feature a lot chaff opponents who’ll explode into bloody giblets after but a single hit. Moreover, to account for the fact that all the combatants are scattered around an initiative track, the chaff enemies activate in groups of three and carry out their actions simultaneously. If they each got a regular turn, we’d be here forever.

Time to break out the level-up charts

That’s not to say that you won’t see tougher combatants or bosses, or even some that don’t feature piddly 8 HP blood sausages at all. Generally speaking, combat is fun, though it was helped by the Alpha dropping me at the point where everyone was level 15 and had quite a few powers. Said powers allowed me to attack more than once per turn, make other characters attack out of turn, or, in Sister Argenta’s case, would combine to give her at least one turn of slaughter per combat that would impress a Space Marine. Four Anver scum are about to learn why you don’t conga line in front of a bolter-bearing Sister of Battle. Screenshot by PC Invasion

Incidentally, space battles also exist in the game and they remind me of the old Battlefleet Gothic rules. Who knows? Maybe that was the inspiration for the ship combat rules in Rogue Trader TTRPG, and the CRPG just follows suit. For me, it’s just more proof that Battlefleet Gothic: Armada should have been turn-based.

Outside of combat, your Rogue Trader will muck about, talk to people, gather loot, take in the sights, and fail one-time-only ability checks. Another small bit of Rogue Trader makes way into the game: you don’t buy stuff with money. You purchase things with your profit factor, which slowly recharges to represent the obscene wealth trader dynasties control. And the loot you don’t need can be packed into cargo, which can be supplied to factions in exchange for reputation points.

Finally, terrain I don’t have to assemble and paint

Now, none of that would matter if the Koronus Expanse was drab and boring. It isn’t! Even the crowds of NPCs that line the corridors of the Footfall station seem larger than you’d be used to in a game. Considering how environmental cues, NPC banter, and item descriptions paint the landscape of the game, exploration is quite encouraged. So is talking to people, something that not only propels the plot forward but also lets you roleplay your Rogue Trader to be as nice or as foppish as you like. See, there are many ways a rogue trader can react to being offered to take part in xeno artifact trade. The proper response for any other imperial citizen would be bolter and chainsword. Screenshot by PC Invasion

Undergirding all the fun in Warhammer 40,000: Rogue Trader is a fairly complex system that relies on stats and skills one would remember from the TTRPG. How much of the actual mechanics remain the same behind the scenes is hard to tell, but my eyes already glaze over every time I see that some ability effect is derived from three different stats.

But if there’s one thing that the CRPG inherits from the TTRPG, it’s the impeccable sense of style. While it’s boorish to talk about the way items and character models look this early in the development cycle, we can already tell that the developer understands that cyclopean architecture is what makes the Warhammer 40,000 fans drool. Massive stone statues aboard space stations, evil spikes erupting around corrupted power generators, propaganda posters generously papering the walls — it’s all there. I do have some complaints, from reasonable stuff like Adept powers being somewhat boring and Leader mostly focused on not fighting yourself, to even more reasonable arguments like bolters not being more powerful. On the other hand, I was playing version 0.0.0.1, so there’s plenty of time to enrich the skill trees with the waters of creativity. The alpha guide says as much!

Maybe they’ll even make the character barks shorter and less twee. For one, I do not want to hear my Rogue Trader say something like “humility serves a man admirably and, for my part, I do my best to humiliate all around me” once, and yet he insists on it every third time I select him.

Summa summarum, Warhammer 40,000: Rogue Trader is shaping up to be a kickass CRPG filled will all the grime, grandeur, and gore one could expect from such a title. It’s also a bittersweet gift for people who had first entered the Koronus Expanse under the auspices of the old FFG RPG. Finally, we can return to the frontier without being hampered by janky rules.

Those who want to try the Alpha can on December 7, with access granted to those who pre-purchase the Developer’s Digital Pack or the Collector’s Edition.

By Martynas Klimas23 hours ago
Previews