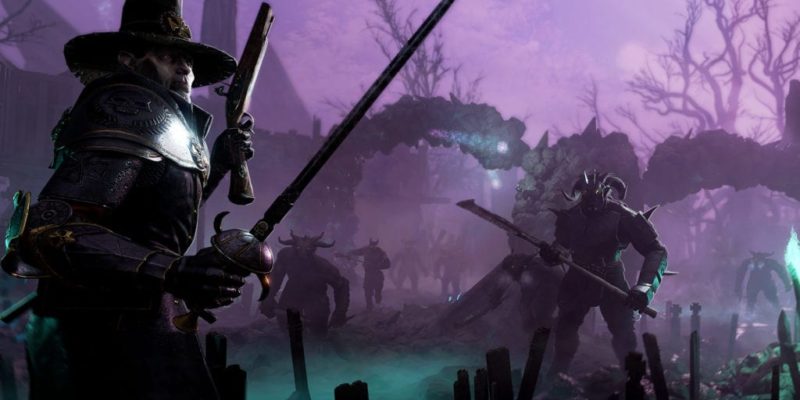 Warhammer: Vermintide 2 exceeded expectations when it released last year. Fatshark’s development team managed to capture a world ravaged and sundered by The End Times. After some ups and downs, we’ll finally bear witness to what you could consider its first actual expansion — Winds of Magic. With the arrival of the Beastmen hordes and the introduction of “Weaves” (a brand new game mode), will Winds of Magic prove to be the spark that Warhammer: Vermintide 2 needs? Or will it end up becoming just a cheap parlor trick? Let’s find out. 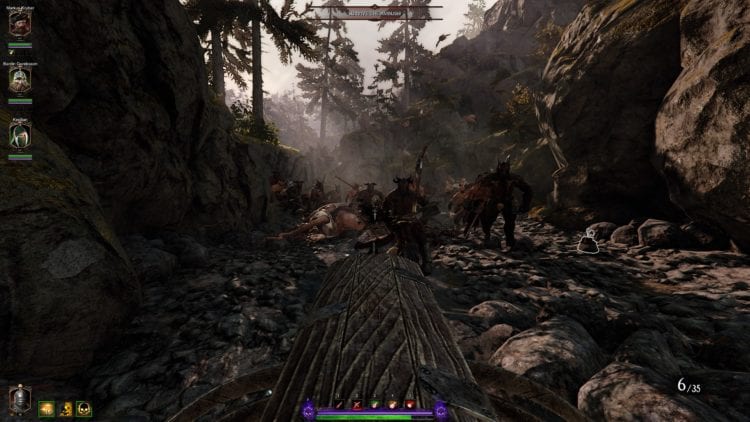 The Ubersreik Five (or four, doesn’t matter) have managed to find themselves in a pickle once more. Well, technically, the entire Warhammer Fantasy world is getting eaten like a pickle anyway, what with the gnawing Skaven and the disease-ridden Chaos cultists from Norsca.

Kruber, Bardin, and co. have now ended up investigating rumblings deep in the Reikwald Forest. It seems the Beastmen brayherds are heeding the call of a Herdstone of immense power deep in the woods. It’s up to our gents and ladies to take these enemies by the horns. 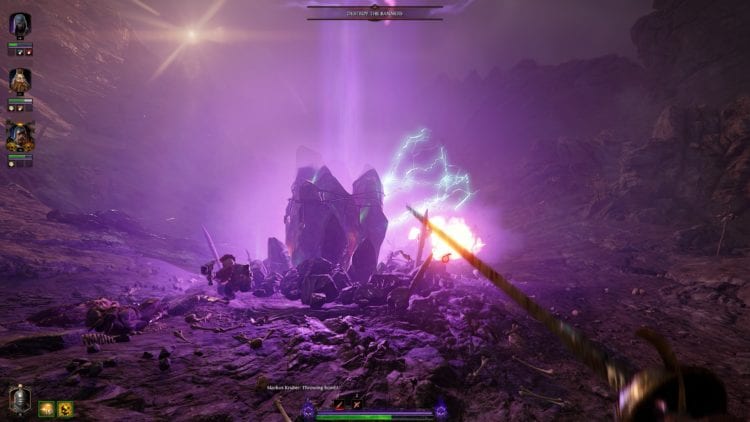 Of course, the biggest treat for any Vermintide 2 player, or any Warhammer Fantasy fan, would be the inclusion of the Beastmen. These half-human, half-animal mutants are touched by Chaos, and they are part of the rampaging armies set to cover the world in darkness. You’ll encounter the following Beastmen enemies in Winds of Magic:

The Beastmen also appear in other maps that aren’t part of the Winds of Magic expansion. You might spot them in the farms of “Against the Grain” or the icy wastes of “Skittergate.” Given new enemy types and combinations with existing mobs, you’ll have your work cut out for you. 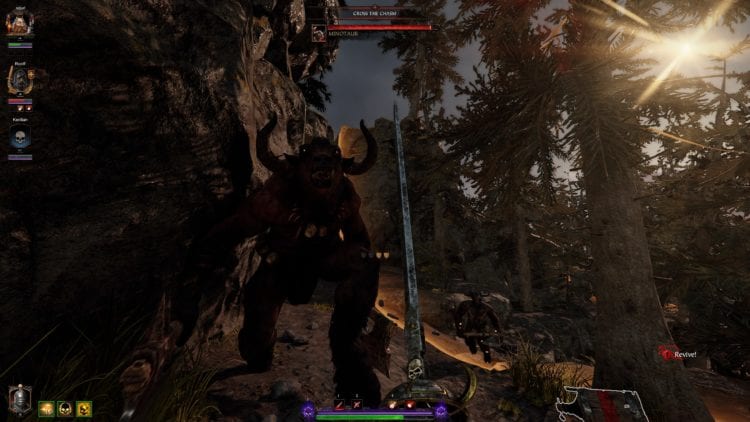 Level up and down

Winds of Magic also boosts the existing level cap to 35… a whopping five levels. When you do reach level 30, you can choose one additional talent (out of three) to help boost your hero’s class. The downside is that you don’t necessarily feel that “power fantasy” that a brand new level cap entails, at least with how that concept is addressed in various games. For the most part in Warhammer: Vermintide 2 – Winds of Magic, you’ll be getting a 50 hero power boost and that’s that.

Speaking of levels, let’s talk the actual new maps in the expansion. There’s only one — yes, just one new sprawling map called “Dark Omens.” Given that previous DLCs such as Shadows over Bogenhafen and Back to Ubersreik added a couple of missions (even old favorites), Winds of Magic‘s sole map is quite a disappointment no matter how good it looks. 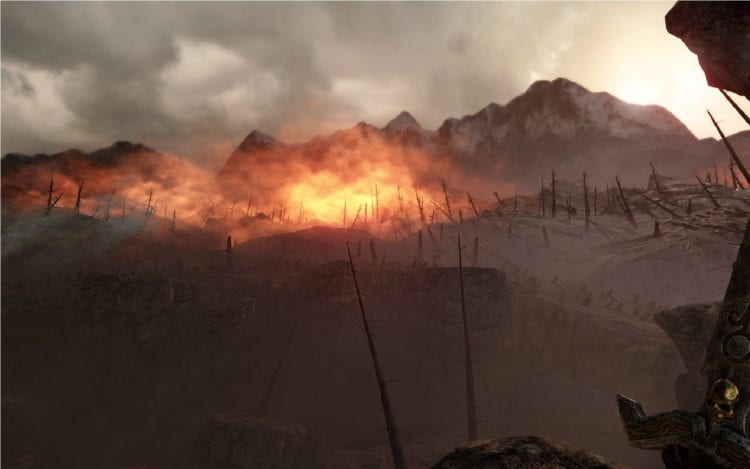 Believe it or not, most of the “new content” you’ll experience in Winds of Magic will come from the “Weave” game mode. These are not necessarily new maps. Instead, they’re more like a mish-mash of various parts of existing maps. In short, it’s a rehash of the same trek you’ve seen in the past.

These mini-levels have their own modifiers based on the titular “Winds of Magic” from the Warhammer Fantasy Battles universe. For instance, Ghyran (the Wind of Life) has you killing enemies to gather their life essence. Due to Ghyran’s control over nature, brambles will start spawning on the deathbed of your foes. The other “Winds of Magic” have their respective modifiers, effects, and even “finales” for each short mission.

I’ll have to admit that the Weave game mode did not keep me interested at all. Given that you’ll start from scratch (like a season or ladder of sorts), you can’t bring any of your old equipment or talents. You’ll have to unlock, craft, and reroll your loadout and perk set in this separate progression system. Imagine having to go through a different leveling process to obtain the same things you already have from the main game mode.

Note: During the Winds of Magic beta, the actual progression system for the Weave game mode was based on each character’s subclass. Imagine having to redo the entire grind all over again if you switched heroes. Thankfully, progression was remedied to be account-wide prior to the official launch. 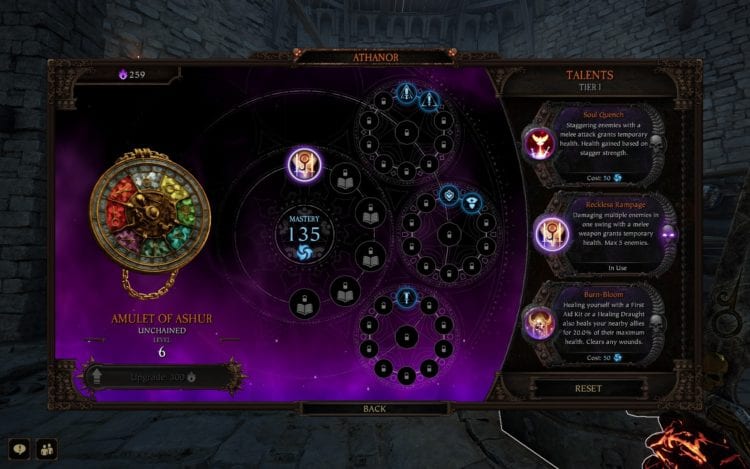 The Weave game mode has leaderboards, sure, but I have never imagined myself playing Warhammer: Vermintide 2 for the sake of comparing online scores. Worse, most players will have a tough time tackling this content solo because this mode won’t even add your CPU-controlled allies. If you get snared by a Blightstormer or Gutter Runner, you’re done for.

The main way of progressing (outside of hopping on Warhammer: Vermintide 2‘s Discord channel to look for dedicated buddies) is to, hopefully, find a random team that’s doing the same Weave level as you are.

That’s easier said than done because you’ll need to find someone else doing the specific level that you’re on just so you can clear it with a group. For instance, I completed half a dozen early Weaves thanks to a dedicated team I met during the beta. I stopped playing after a few hours, but I hopped back online later in the day. Imagine my surprise when I started matchmaking for Weave #6 only to end up joining a team on Weave #7. When we completed that level, my progress was still locked at Weave #6. After a dozen levels (solo-queued and with teams), I found that this game mode was just unbearable and unnecessary. 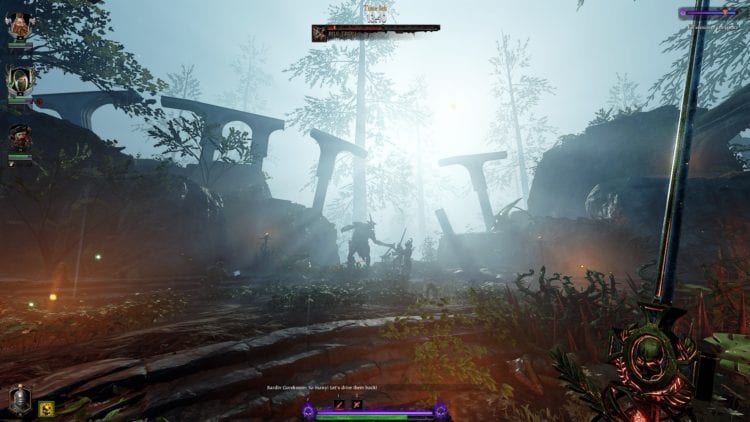 What else are we looking at? Well, you’ve got one new weapon for each of your heroes. For instance, Sienna has a flaming flail, Kruber has a heavy spear, and Bardin has throwing axes. The Weave game mode also lets you obtain some cosmetics such as portrait frames, and that’s about it.

Imagine seeing non-stop waves of Stormvermin and Chaos Warrior patrols, backed by a couple of charging Bestigors, while Ungor archers snipe you from afar, and a couple of Gutter Runners pin down your teammates. It is extremely unforgiving, but equally enjoyable if you find the right team and composition.

Sadly, you’re only playing on Cataclysm for the additional challenge. You won’t get a bump for your hero power via drops (chest drops are still at 300 power and you’re only getting a power boost as you level to reach the cap). Likewise, you’re not always guaranteed high-end items. You’ll still be at the mercy of RNG (especially if you lose a tome or a grimoire). Whatever you may earn, no matter how lucky or unlucky you are, won’t carry over to the Weave game mode (except for essences/currency used to upgrade your amulet), so the whole endgame loop becomes pointless.

Note: It should be mentioned that Cataclysm doesn’t even have its own set of loot chests. You’re still getting chests classified as coming from Legend difficulty! 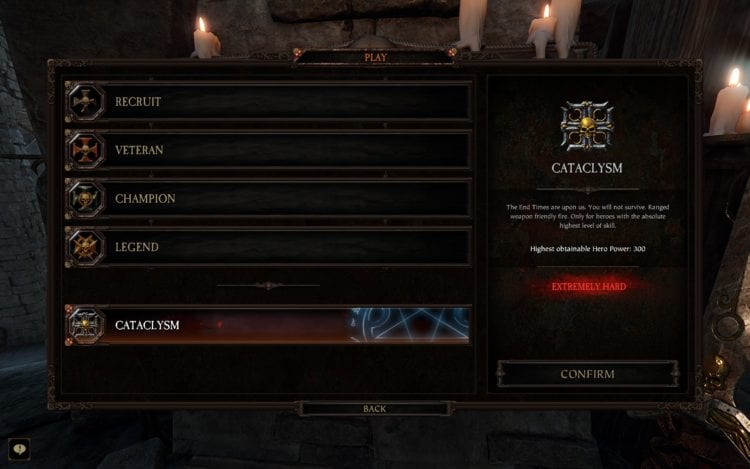 Warhammer: Vermintide 2 – Not quite the GOAT

It’s a shame that you’ll still end up replaying old content due to Winds of Magic‘s sole new map, especially if the Weave game mode isn’t to your liking. Likewise, if you’re soloing in the default mode, prepare for frustration because bots are still as clunky as ever (forgetting to pick up tomes or never grabbing grimoires). Lastly, the adjusted stagger mechanic for combat is a nice addition, but it becomes too technical to focus on when absolute mayhem is occurring.

The technical aspect that should’ve been considered is the network connection. Warhammer: Vermintide 2 still uses peer-to-peer networking even a year and a half later with the release of Winds of Magic. If the host drops out or you lose your connection for some random, inexplicable reason, you’ll have to say goodbye to any progress you’ve made.

Speaking of everything feeling “disconnected,” it seems that this concept is a recurring theme in Winds of Magic. With only a single new mission, items that can’t be carried over to a different game mode, another monotonous grind, and egregiously inept matchmaking for solo queued or “PUG” players, the developers may have forgotten what led to Warhammer: Vermintide 2‘s initial success. When your entire expansion hinges primarily on a game mode that requires dedicated groups, knowing you’ve got thousands of players who approach this as a “pick-up-and-play” game, you’ll know you’ve missed the mark.

Fatshark tried to tout Winds of Magic as Warhammer: Vermintide 2‘s first real expansion. Sadly, it pales in comparison to what actual expansions can be like. With the arrival of the Beastmen, you can be certain that you’re fighting against countless humanoid goats. But, with lackluster content, Winds of Magic is far from the “GOAT” for any category.

If you feel a little adventurous with your dedicated team, or you’re eager to be disappointed, you can grab Warhammer: Vermintide 2 – Winds of Magic via Steam. If ever you’re stuck in the Dark Omens mission and you need help finding the tomes and grimoires, you can check out our mini-guide here.

The first expansion for Warhammer: Vermintide 2, Winds of Magic adds the Beastmen faction and the Weave game mode.
5

Ridiculously lacking in new content and with a Weave game mode that feels like a parlor trick you've seen before, Warhammer: Vermintide 2 - Winds of Magic's only saving grace is the introduction of the Beastmen. Even then, it's still a mediocre expansion for a once-promising game.