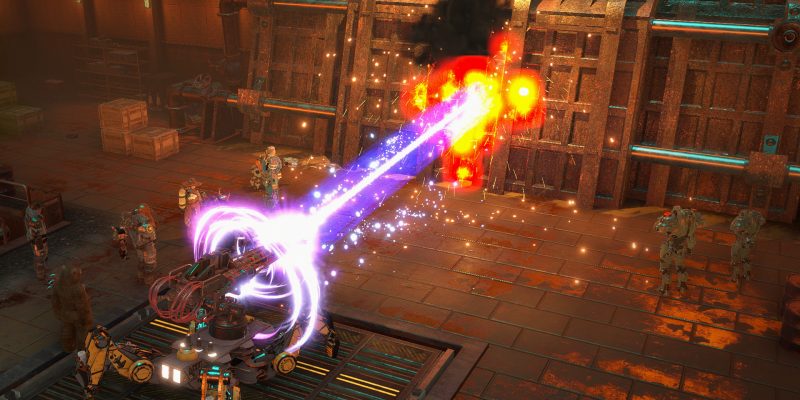 Last August, I was able to play Wasteland 3, inXile Entertainment’s latest entry to the post-apocalyptic, turn-based RPG. Although it had a few flaws, my 60-hour journey was very much enjoyable. Still, I was looking for more, perhaps new adventures in the frozen wilderness of Colorado. That brings us to Wasteland 3: The Battle of Steeltown, the game’s first expansion which is set to release today.

For the sake of transparency, the developers did provide a save file that had pre-leveled characters (level 12) with decent gear. That was a blessing in disguise since I actually lost my save file when I upgraded my PC last year, and I only realized this mishap recently. Thankfully, I didn’t have to replay the game from the beginning.

You can start the main quest in Wasteland 3: The Battle of Steeltown as soon as you hit level 9. The moment you exit Ranger HQ to go to the world map, the Patriarch will tell you to head for the facility that’s just south of Arapaho Caravan. To be clear, while level 9 is the bare minimum requirement, the challenges are for those who are level 11 or higher. Likewise, enemies will scale depending on your level, so you can actually visit the location at any time during the main campaign as long as you haven’t reached the point of no return.

In any case, your arrival at this location, formerly known as Pueblo, Colorado, sets the stage for a brewing conflict. It seems that the facility, known for producing most of the Patriarch’s weaponry and robotics, is undergoing an upheaval.

The facility’s administrator, Abigail Markham, is beset on all sides. There’s a raider attack about to commence, and a group known as the Ghost Gang is attempting to breach the gates. Worse, the workers are on strike and production has completely stopped. Soon, you’ll learn that not everything is as it seems. 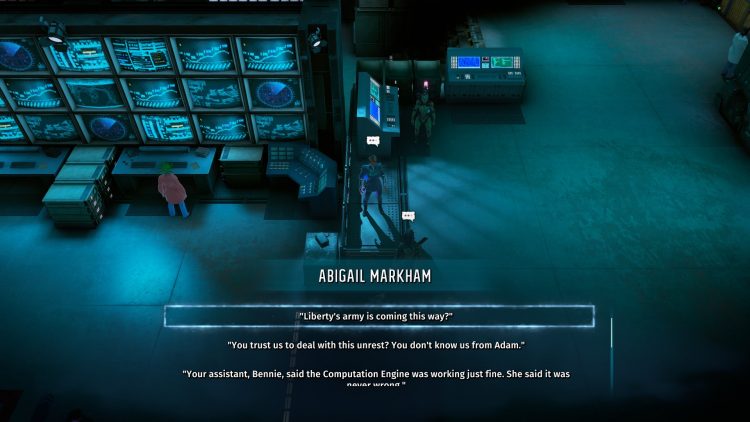 Going non-lethal and bursting your bubble

New features in Wasteland 3: The Battle of Steeltown include non-lethal weapons known as Disruption tech. These deal very low damage, but do apply a stacking Disruption debuff. At 10 stacks, human enemies will get knocked out instantly instead of getting killed. In fact, choosing non-lethal options to resolve encounters will have an impact on how the story develops. Similarly, there are other weapon types such as tar throwers, debuffing targets with weakness against fire and explosions.

There are opponents astride mechs that will focus on attacking particular party members, beelining for them unless you can stun the robot or get out of the way. Moreover, there are elemental shields applied to units, preventing them from taking damage or incurring debuff stacks unless they’re hit by a weapon with the same element. 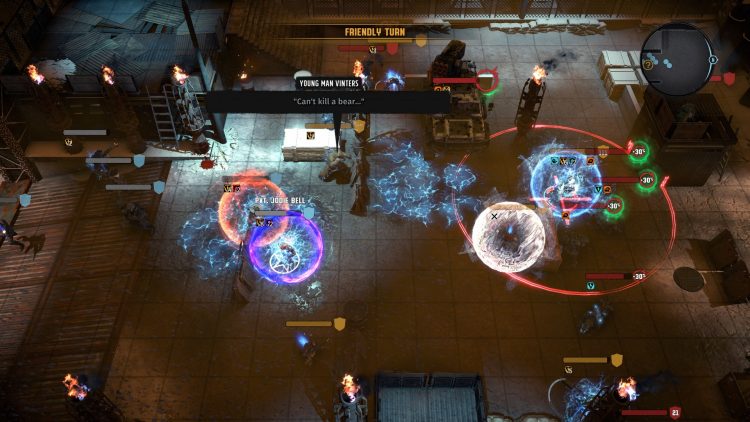 Making decisions in Wasteland 3: The Battle of Steeltown

As you might expect, Wasteland 3: The Battle of Steeltown presents a plethora of decisions and sidequests. Some are fairly rote and mundane, such as completing tasks for a job placement or deciding on which scientist’s project to sabotage.

Then there are those that have far-reaching consequences. For instance, the Factory Level requires you to side with either the revolting workers led by Salene Crow or the facility’s security forces headed by Karl Ludlow. Assuming you joined forces with Salene Crow, she’ll play a more prominent role as you progress in the expansion’s campaign.

Later, you’ll even get opportunities to handle a robotic sidekick, as well delving deeper into the core of Steeltown’s problems. Your decisions and actions will lead to branching paths, culminating in a finale and epilogue. Without spoiling too much, you’ll see allies lend a hand, assuming you helped them along the way or chose non-lethal methods during confrontations. 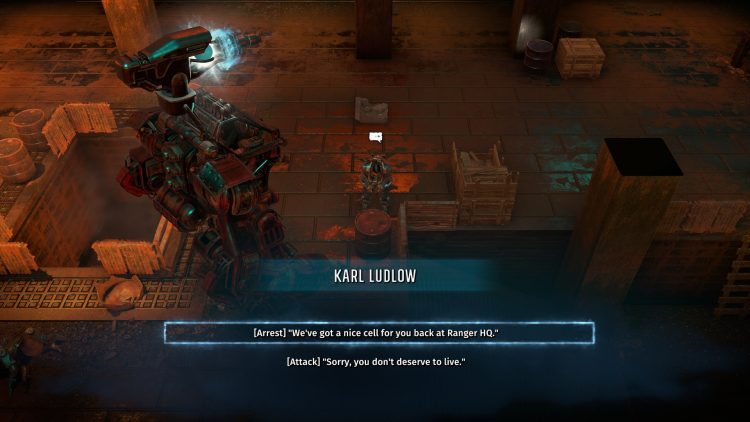 Is it worth your while?

Regrettably, Wasteland 3: The Battle of Steeltown does have a few issues. I’ve seen a couple of sidequests and tasks that were either bugged or incomplete. Likewise, there were a few visual bugs and action command flubs. Units would sometimes slide from cover to cover during battles (even though I wasn’t using a controller), and there were moments when I couldn’t click on certain commands like “defend” or “prepare” (I had no choice but to end my turn prematurely). Hopefully, these issues get addressed in a patch soon.

However, perhaps the biggest drawback of this expansion is that it’s fairly short. My first completion clocked in at just a little under six hours. I did extend my playtime a bit, but this was in order to see other outcomes and results so I could provide more detailed guides. 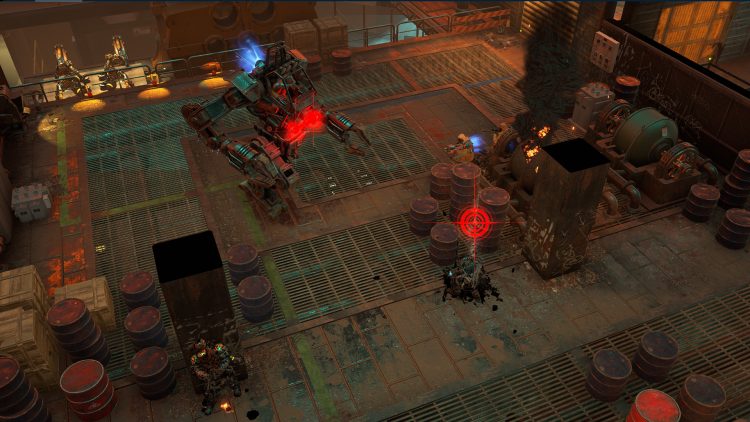 Another factor to consider is that I’m currently uncertain as to the far-reaching consequences of actions in Steeltown. For instance, will there be repercussions in the main campaign if you maxed out your Steeltown reputation? Will non-lethal weapons play a role during critical encounters, such as incapacitating characters even if there’s a firefight? I wasn’t able to test these outcomes during the course of this review.

In the end, however, I still consider Wasteland 3: The Battle of Steeltown to be a fairly decent experience. It adds just enough content (weapons, armor pieces, blueprints, and tactical methods) to justify another look at post-apocalyptic Colorado. The narrative is tight, and there are callbacks to events in the previous game, as well as Easter eggs from other titles. You even get to meet minor characters from other parts of Colorado who found their way to this facility. This short, but enjoyable romp will definitely make you want more expansions for Wasteland 3. If ever you’re interested in picking it up, don’t forget to check out our guides and features hub. 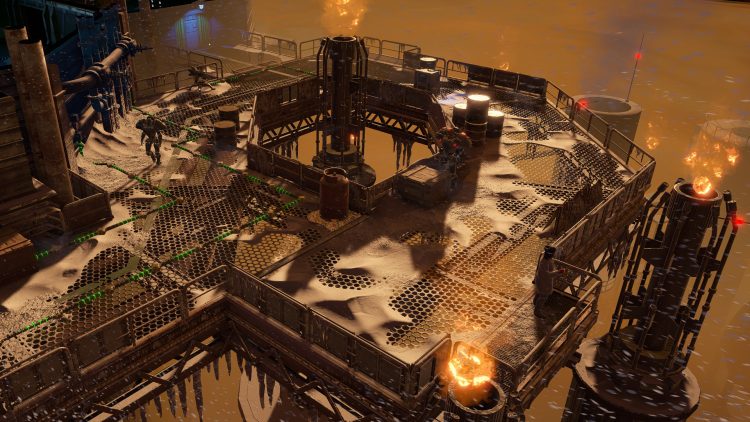 Wasteland 3: The Battle of Steeltown

The first expansion for Wasteland 3 takes you to a massive factory that supplies Colorado with weapons and materials.
7.5

Wasteland 3: The Battle of Steeltown has a few notable flaws, and it's also a fairly short romp. However, there's enough content and tactical depth to make you want to keep adventuring in this post-apocalyptic landscape.

Samurai Warriors 5 preview — Did you get a haircut?