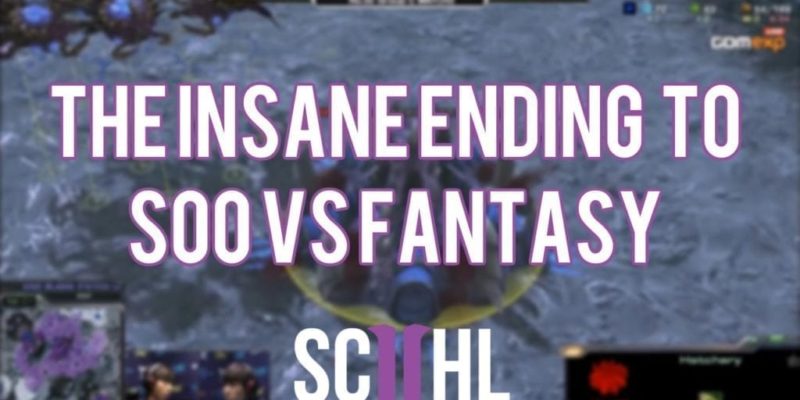 Fans of eSports were blown away last night when a game of Starcraft II came down to the final straw. Watch the highlight video below.

For those uninitiated, players in Starcraft control armies of various species. The whole game is a careful balance of resource management and combat strategy. The game is normally won when a player figures out they can’t make a combat an forfeits. But once in a while, victory can be achieved by destroying all of the opponents buildings.

In this video, both players are all out of money. The red ‘Terran’ player, Fantasy, has buildings, but only a few military units. The blue ‘Zerg’ player, SoO, has an army, but only a couple buildings.

One of Fantasy’s units is a flying helicopter, called a banshee, that can turn invisible for a short period of time. But SoO has another flying unit, called an overseer, which can can cancel out the invisibility. Once Fantasy kills SoO’s overseer, he has a limited amount of time to use the banshee invisibility to safely destroy all of SoO’s buildings. As soon as the invisibility runs out, the SoO’s army will take it out and win the game.

As the countdown comes close to zero, even the commentators are unsure if Fantasy can pull it off. But watch the video to see for yourself.

Final Fantasy Creators Team Up with Microsoft for DirectX 12 Demo