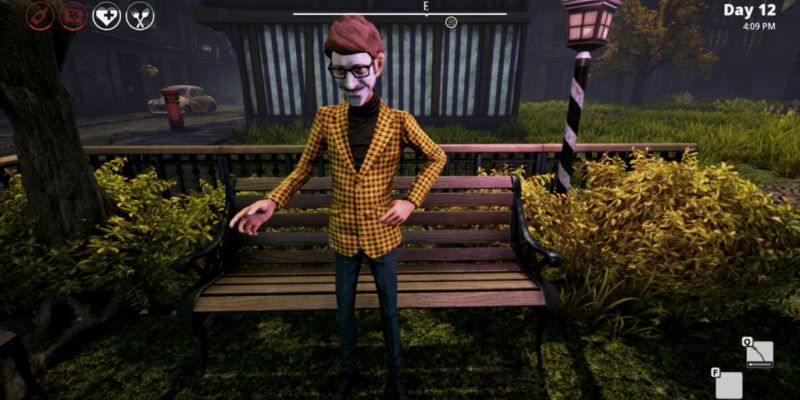 If you followed We Happy Few’s Kickstarter campaign, you’ll be one of the (happy) few people who always knew this title was going to be a single player survival-and-crafting game in a procedurally generated world. Many more, however, will have first been introduced to the game with a trailer shown during Microsoft’s E3 press conference; and they can easily be forgiven for thinking We Happy Few is more of a tight, narrative-driven affair. It’s a necessary illusion to dispel, because although Compulsion say the Early Access game will gain more story elements over time, the heavy mechanical beats of crafting and survival meters aren’t going anywhere.

In the current Steam build, you make your way through the segment from the E3 trailer as Arthur (one of three characters that will eventually be playable), and wind up in an underground Safe House after a scripted escape. The Safe Houses on each of the islands (four in Early Access, at least that I’ve seen) are where you return to stash items, grab uninterrupted sleep, and, if you’re me, almost starve to death because you’re too stupid to immediately craft the lock-pick needed to acquire a vital jimmy bar for your first departure. 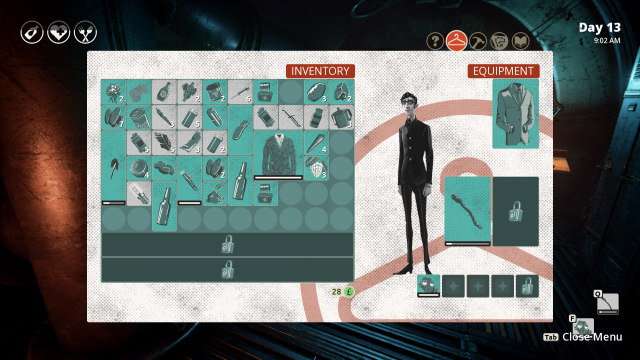 In my (very slight) defense, Arthur is an extremely fragile individual who seems capable of starving to death within about a day. He also becomes as weak as a tiny kitten if he goes without sleep for 14 hours or so, and will dehydrate within minutes. On the plus side, he can take several blows to the head from makeshift clubs and survive explosions; so his outer shell is quite robust. Compulsion have already noticed that this is a bit of a weird state of affairs and have said they’ll be “toning down” the survival needs. Early Access feedback in action, there.

Lacking those story-centric elements (besides a few ‘lore’ notes dotted around, and some weird propaganda pieces blaring from speakers and radios), it’s difficult at this point to see how We Happy Few plans to pull its influences together. There are clear references and inspirations from authoritarian fiction: the newspaper redactions of 1984, the drug-controlled populace of Brave New World, and the ostensibly cheery village in the grip of tyranny from The Prisoner. But at the moment these feel a bit cherry-picked. Wellington Wells is a neat, and stylish, tour through some greatest hits of British dystopian fiction, presently lacking a real coherent core of its own.

To stress again, this is in Early Access, and that sense of unique narrative identity may come with time. In fact, you can assume a tacit “at this point in time” hovering around the end of most of the sentences in this piece. That’s the nature of writing about Early Access. 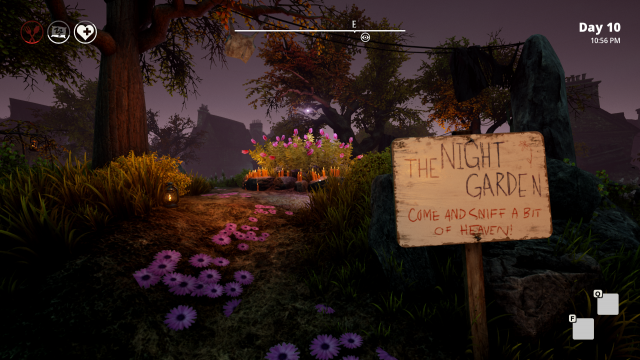 Another clear dystopian reference. This time to Igglepiggle and pals.

The bulk of what’s actually here is centered around crafting systems, straightforward quests, and the procedurally generated islands Arthur gets to explore. After fleeing from his workplace for being a ‘Downer’ (someone retaining enough self-reflection to question the system and refuse the mandatory ‘Joy’ drug), Arthur winds up in the Garden districts. These run-down areas are populated by other ragged, moping Downers, who’ll largely leave Arthur be as long as he’s dressed in an equally thread-bare outfit and not actively stealing things in front of them. Islands accessed later in the build are actively patrolled (by police and citizen alike), and are very un-welcoming to anybody they suspect of being off their Joy.

Islands are laid out like contained, four-by-four city blocks with (usually) a couple of bridges heading off to neighbouring areas. Starting a new game (either by choice or because you opted for the Permanent Death option at the beginning) will shuffle up the ‘tiles’ that make up each island and present the player with a slightly different lay-out. That large tree-house and attendant quest may now be in a different location, or replaced by another mission altogether.

It’s difficult, at this early stage, to quantify how important an impact the procedural generation will have on player activities. At the moment, no matter what, the player’s overall task on the first island is to locate the necessary items to craft a padded suit, find the randomised location of a tree full of honey (and bees, hence the suit), and use this honey as a bridge toll to progress to the next area. Shuffling around the location of searchable houses doesn’t really add or detract from that critical quest-line. 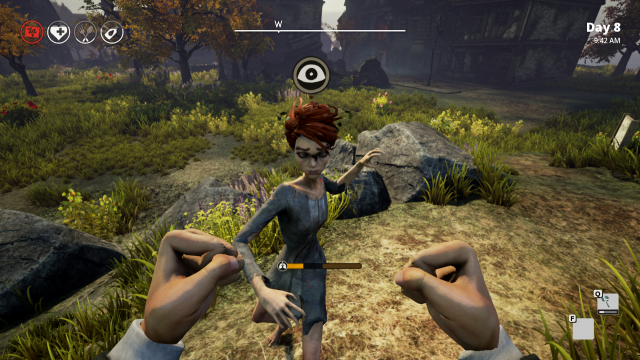 Look, you don’t understand, I needed to steal your sewing kit so I can pay a man with honey.

At other times, We Happy Few feels as if it could really benefit from more direct hand-crafting of levels. Once you hit the island where police patrols roam and retro-tech barriers are set up to impede movement, the game’s stealth ramps up. It goes from avoiding being seen nabbing things near largely disinterested NPCs, to practically being on the run at all times. The only alternative is to chomp Joy pretty much constantly; impossible while limited to pills (slightly easier once you find it on tap). This more demanding stealth scenario cries out for more robust level layouts, designed around the rules and limits of the AI.

Right now, stealth play (effectively your only choice on later islands) just feels loose and unsatisfying. It’s not particularly demanding to leg it away from trouble, because the AI tends to just give up after a brief pursuit, but nor is it particularly enjoyable to have to exploit this to get around anywhere. Triggering some NPC quest dialogue and immediately needing to run away to a safe distance as they burble away to themselves is probably not the intended method of play.

Direct combat is mostly discouraged (though a couple of quests do require it), so its basic nature is a bit more understandable. It’s straightforward first-person stuff. Wave your branch or pseudo-club at the enemy until they fall down, or until you need to rest a bit to recoup some stamina. Much nearer to the worse bits of Skyrim than something weighty and novel like Zeno Clash.

Good evening officers. Nice night for me to be fucking right off.

That’s quite a bit of Downer-esque critique, but there’s no sense in avoiding that We Happy Few is launching at a rough stage of development. On the more Joy-ful end of the scale, during my 4-5 hours with the game there have been sparks of the emergent, player-driven actions that I think they’re going for here. Stuck in a heavily trip-wired area, the thought occurred that nearby unconscious bodies could serve as useful objects to set off the explosives. Excellently, this proved to be the case. In another instance, luring the AI into setting off their own doorway trap proved to be a smart way of avoiding the need to (tediously) create another deactivating item at a special crafting bench.

Those little moments of unscripted creativity felt rewarding. But for each one of those, the game has a horribly broken quest, or another inventory jumble-hunt because there’s no sensible way to organise your items outside of ‘big mess’. I’m pretty confident those types of problems will be sorted out through Early Access updates (and it’s an encouraging sign how engaged and visible the development team have been since last week’s launch), but I feel rather more worried about some of the more ingrained systems. As things stand, the crafting and combat systems feel unremarkable, the stealth mechanics (where they even exist) are poor, and the fetch quests are prone to breaking.

We Happy Few has garnered a lot of justified praise for its art direction, but it’ll take more than the eventual insertion of a more focused narrative (no simple task in itself) to give some of these mechanics greater coherence, purpose, and reward. Unless you’re desperate to lend your voice to the Early Access development process, or are already hopped up on Joy, hold on to that $30. This one needs more clinical trials before it’s ready for widespread public consumption.

We Happy Few is available through both Steam and GOG’s Early Access/Games in Development systems.