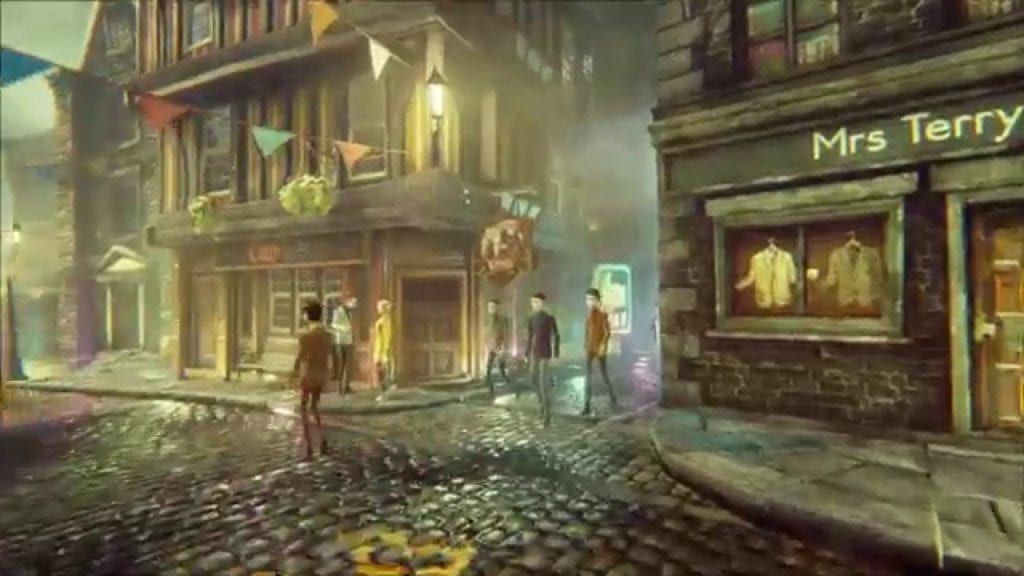 There’s something sinister about Wellington Wells. The city’s inhabitants seem pleasant enough. They strut down rainbow-paved roads and splash happily in puddles. Couples canoodle on benches, embracing one another in public without caring who sees. It’s a well-policed place, too. Stern, impossibly tall constables meander up and down the street, vigilant and imposing. Even the public gardens are spectacular. But, still, it’s impossible to shake the feeling that something’s not quite right. That tucked somewhere, just out of sight, is a secret that could shatter Wellington Wells’ neo-Mod facade. The same can be said about all of We Happy Few. Compulsion Games’ latest looks great from a distance, but if you get too close, the whole thing falls apart.

We Happy Few is a tough nut to crack. It’s a unique exploration of rebellion in a society that chooses to repress any — and all — feelings of discomfort. But at the same time, it’s kneecapped by the systemic manifestations of that theme. The game’s narrative-driven aspirations struggle under the weight of crafting and survival elements that frustrate more than they immerse. We Happy Few is fascinating in theory and flawed in practice.

All’s not well in Wellington Wells.

We Happy Few tells the story of three different characters stuck in Wellington Wells. Each of the main characters — Arthur, Sally, and Ollie — are struggling to deal with life after Joy, a widely distributed drug that placates users. Most people take it willingly, choosing to bask in an altered state where everything seems just peachy rather than deal with life’s unfair twists and turns. Each of the game’s playable characters has a reason for skipping out on Joy, and their respective narrative arcs dive into troubled pasts, confused futures, and efforts to right long-forgotten wrongs.

It’s an interesting, compelling setup. We Happy Few actively paints players as outcasts in a society obsessed with happiness. Progressing through the game means making decisions; you can sneak around Wellington Wells’ island layout, scrounging for materials and avoiding suspicion, or opt to give in, pop some Joy, and hope it doesn’t distract from your mission. Wellies don’t take kindly to those who refuse to conform. Though they’re generally an agreeable bunch, residents veer towards hostility and open violence when someone’s seen breaking the law.

The stranger hiding in plain sight motif falls in line with We Happy Few‘s gameplay. Arthur, Sally, and Ollie have clear reasons for living without Joy, and they’ll do whatever it takes to escape Wellington Wells. Mostly this means undertaking a series of story-based missions, many of which revolve around sneaking into parts of the city where Downers — the game’s term for people off of their Joy — aren’t welcome. Each protagonist has a unique gameplay style that pushes the limits of We Happy Few‘s pseudo-immersive sim stylings. Sally, for example, is a talented chemist. What she lacks in physical strength, she more than makes up for in the drug-production category. Sally’s capable of making special syringes and perfumes that can knock even the game’s toughest enemies out. There’s an emphasis on collecting resources and crafting to gather tools and food, as well as hunger, thirst, and sleep meters.

A playable cast with markedly different skillsets might point a game that’s focused on providing players with dynamic, expressive gameplay. Unfortunately, that’s not the case here. We Happy Few is rigid. After getting acclimated to Wellington Wells, it quickly becomes clear that it’s a city that’s on the verge of collapse, figuratively and literally. The vast majority of players’ time in the game revolves around dealing with clunky, frustrating AI. As mentioned, Wellies can’t stand people who break the rules. Trespassing, even for a second, means running the risk of an entire village chasing you down with axes in hand. NPCs appear at random, often behind your character, during stealth sections. Even running down the street is a crime punishable by death. Trying to play by We Happy Few‘s rules is exhausting, and not in the way the developers intended.

But all of its awkward AI and obtuse logic pales in comparison to the game’s greatest flaw. For whatever reason, We Happy Few lacks quicksave and quickload buttons, as well as a proper load option on the pause menu. It’s endlessly frustrating that, in a game requiring plenty of sneaking and stealthy exploration, these quality-of-life features are missing. The combination of overzealous AI and this lack of essential, expected features ruins what’s an otherwise janky but tolerable experience.

It’s a shame that We Happy Few‘s actual gameplay is lacking because it excels in the art and story departments. Amid all the erratic, stumbling stealth and tacked-on crafting are moments of excellent, touching writing. Wellington Wells, despite what the Joy-takers would have you believe, is not a happy place. There’s tragedy at the heart of the city, and We Happy Few sells it hard. Its three playable characters are propped up by diverging narrative arcs that make them feel genuine. They’re flawed, and as characters, that’s their greatest strength.

Even the city itself has a unique backstory. We Happy Few shows restraint in sharing all of its secrets, but the steady drip of worldbuilding — through exposition and written notes scattered about — helps bring a troubled, complex place to life.

The same, too, goes for the game’s art direction. It’s stellar. We Happy Few fully commits to a far-out, twisted vision of 1960s Mod culture. Every character has period-appropriate clothes covering their exaggerated limbs. The expressionless white masks — signifying the peace that comes from a crippling Joy addition —  that cover everyone’s faces is effective and evocative at selling this bizarre world. Similarly, the neo-futuristic technology that powers Wellington Wells builds upon the game’s uneasy fiction. The juxtaposition of tech-savvy, oblivious Wellies and their well-kept streets (even if there are occasional gas leaks) and the Downers, with their run-down buildings and fields of undetonated bombs, creates a rich and easily readable atmosphere.

There’s the shell of a great game here. One that’s bizarre and genuinely interesting. But while We Happy Few‘s aesthetic design colorful worldbuilding are uniformly successful, they’re crushed under the weight of clumsy gameplay and unnecessary systems.

Although We Happy Few makes a strong first impression, it's hampered by half-baked gameplay systems and a lack of crucial quality-of-life features.