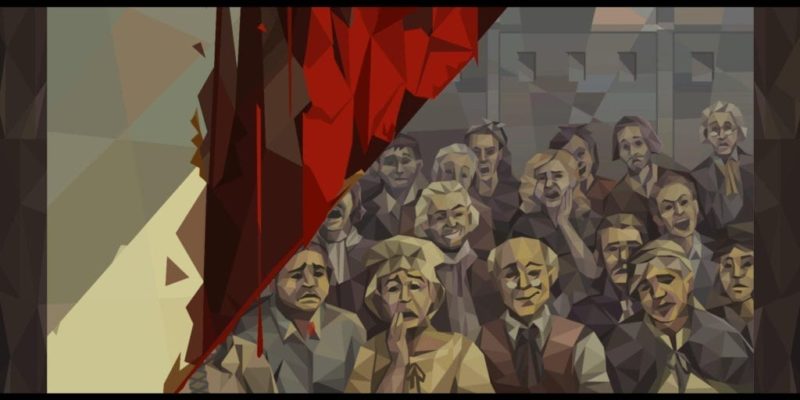 In We. The Revolution, players are given the opportunity to step back into one of the most tumultuous and influential periods of European history: the French Revolution. Tensions were high, and so was the violence, with clashes between people, classes, and the ruling monarchy. You are an up-and-coming tribunal judge looking to make a name for himself and rise up the social ranks. As such, you need to uphold justice while defending French revolutionary ideals. Revolution eventually transforms into a game of political strategy and intrigue. However, it’s not necessarily a game about justice.

I sat down to try a few cases in We. The Revolution. It turns out, there’s no such thing as a simple, open-and-shut case, even when it has to do with your own son. The tutorial features a mock trial against your adolescent child, who is accused of getting into a fight and breaking a kid’s teeth. The game presents players with written cases, some of them spanning multiple pages. No lawyers appear to be present, as each defendant has to represent him or herself. Therefore, it’s up to the judge to piece together clues from the text and come up with relevant questions.

The case notes highlight clues, and players must match them up with relevant categories to unlock questions. However, it purposefully includes some clues to mislead you, and you have a limited number of wrong guesses before the game forces you to move forward with the case. The process takes a little getting used to, as it takes some guessing to figure out what clue fits into certain categories, but I quickly got the hang of it. By questioning the defendants, you gain a clearer picture of each case’s details so that you can better render a ruling.

Apparently, my son hit another kid because he was defending my reputation. A group of kids was bullying him by calling his father (me) a drunkard. That happens to be true, according to the story. Even my wife takes every opportunity to remind me that I’m a terrible drunk. But although he admits to starting the fight, he could not attest to whether he’s responsible for breaking the bully’s teeth.

There are no additional witnesses who can corroborate or refute his story. As such, the verdict can be as arbitrary as I want. I could acquit my son simply because he’s family, or I could punish him. Either way, my decision could have a rippling impact on both my personal and professional life as a judge. So, I decided to punish him for starting a fight.

The tutorial has no lasting impact, except maybe to upset your wife. Later cases do, however, and verdicts can be just as arbitrary. Revolution doesn’t run you through 18th Century French law, but there is some guidance for rendering verdicts. For instance, there’s a jury that represents the will of the common people, which may change its opinion based on testimony. So, there’s an opportunity to manipulate the jury if you ask the right questions.

There may also be factional preferences shown before you even review a case. The people may demand a specific verdict while revolutionary radicals want another, and choosing between them will influence their support for you. Although you technically don’t have to listen to anyone, angering a faction too much could lead to your beheading or assassination.

While verdicts may send innocent people to prison or death, following your sense of right and wrong can be a bit of a luxury. In most cases, it’s a matter of appeasing a certain faction while not losing too much support from another. Consequences of your verdicts will spill over into your personal life, with family members commenting on your choices. Your family members are aligned with different factions, so there is a connection between your professional and personal lives.

At the same time, you’ll make personal life choices, including getting over your drinking problem, fostering a closer relationship with your family members, or indulging in vices such as drinking and gambling. These choices will also influence your rise up the social ladder, with lives possibly at stake.

I asked someone from Klabater, the game’s publisher, what prevented me from skipping the reading and questioning process to simply issue a verdict based on factional predisposition. He said it all depended on my strategy, which I took to mean nothing. But that’s not entirely true, since there is some post-verdict paperwork to do. Players take an open book quiz that will influence their reputation, but it’s fairly shallow. Instead of using details from the case to justify your judgment, it simply asks you to fill in the blanks to make sure you read the text correctly.

All this might not sound like a very compelling legal drama, but I get the sense that it’s not aiming to be an episode of Law & Order or even Phoenix Wright. Revolution is about balancing your personal life with your political ambitions. As such, these court cases are simply a means to an end. You could be a superficial judge or one that genuinely pursues a sense of justice. Both paths could lead to your potential execution. Players are not led in any specific direction, leaving them free to choose however they want.

But I also have to admit that there could be a tinge of regret if I knowingly sentenced an innocent person to prison or death, especially since questioning may change a jury’s opinion on a case. It’s impossible to please everyone all the time, and some of these faction leaders may become your opponents later on. So, there might not be much sense in always working to appeasing them.

The game makes more sense as a strategy game with puzzle elements. It partly explains the factions’ strong reactions to minor cases such as vandalism between two merchants. Ruling to punish or acquit a vendor for destroying another one’s booth costs significant influence with either the people or the revolutionaries. However, it’s also possible that the demo presented me with the wrong case because the clues indicated a murder, which didn’t match the rest of the materials.

Cases will eventually grow to include alleged murderers, aristocrats, and political figures. All the while, the French Revolution will heat up. Players will meet important figures from history and perhaps change their fates from what happened in real life. As you become a more prominent figure in French society, you’ll have a hand in shaping its outcome. That’s when Revolution begins to transform into an entirely different kind of game.

Players will need to uncover and defeat a list of adversaries with a Game of Thrones level of political intrigue. Trying cases earns influence points, which you can use to establish a network of spies, informants, and thugs. You’ll use them to uncover your enemies are and eliminate them before they can do the same to you. By doing so, you’ll be able to climb up a rung in the political hierarchy.

This involves moving your agents around on a map like on a board game. Then you’ll use influence points to perform actions such as gather information, reveal your enemy, or take an opposing agent out of play. You’ll mainly work with low-level thugs at the start, but your network’s strength will grow alongside your position and influence. Additionally, you’ll need to charm influential people to your side in a separate mini-game where you have to say the right things at the right time.

With over 100 cases to hear (or read, rather), coming out to about 20 hours of gameplay, We. The Revolution certainly won’t be for everyone. Its main appeal will be for history buffs and strategy game players who want to put their in-game sense of morality to the test. The beautiful, hand-drawn art style also helps to keep players visually engaged. For me, that alone makes the game well worth checking out when it releases.

We. The Revolution is expected to launch on March 21 for PC.