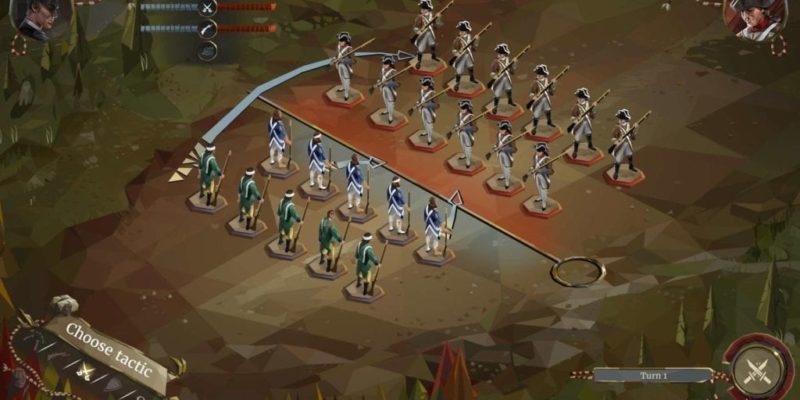 Suddenly going from being a judge to a militia leader.

Although We. The Revolution begins as a courtroom drama set at the height of the French Revolution, the game evolves to include related mini-games. After some political intrigue, you’ll soon find yourself leading small armies into battle. It’s up to you to make the right moves and lead your forces to victory.

The game currently doesn’t offer much in the way of instructions, but this guide will help cut down on some of the trial and error so that you’ll have the edge in combat.

Preparing For Battle In We. The Revolution

The size of your army is determined by how convincing you are in the preceding persuasion section. So, use your influence points to read the room and respond to their emotions accordingly. It helps greatly to have a strong standing with whichever faction you’re speaking to, since it determines their starting attitudes towards you. 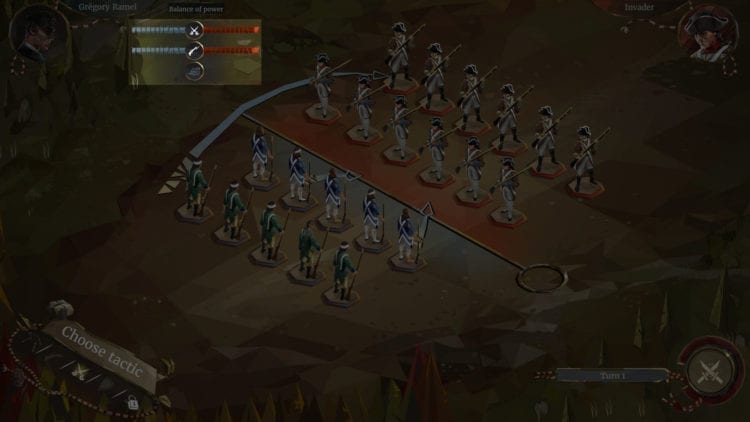 Keep a close watch on the Balance of Power

When in combat, look to the upper left-hand corner to see the Balance of Power. These bars represent the respective health of your armies, divided into categories that include frontline soldiers, gunners, and artillery. The blue health bars represent your forces while the red are the opponent’s. Sometimes, the two armies will be evenly matched. Other times, the opponent may hold an advantage such as more units or a combat bonus. You’ll have to assess your opponent’s strengths and weaknesses, then choose the appropriate strategies.

The attack order is as follows:

If a line is eliminated, the rear ones step forward. 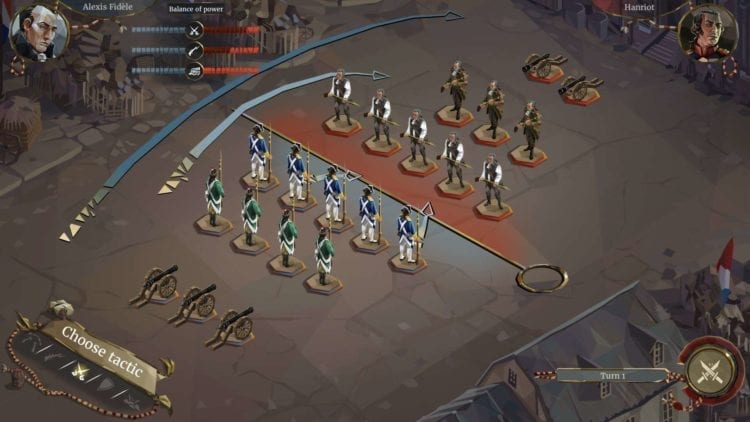 There are five different tactics to choose from.

In We. The Revolution, you’ll be able to choose between five different tactics to wear your opponent down.

Although there is some strategy involved, We. The Revolution battles are mainly a matter of attrition. Put simply, you want to take down as many of his units as you can before they can do the same to you. While some opponents may act predictably, each move (especially the first one) is mainly guesswork. So, your first move is almost always the one that will do the most damage to your foe.

Selecting a tactic may cause the enemy’s health bars segments to grow brighter. This indicates how much damage will be done by your attack without taking into account defensive bonuses. If you have a chance to greatly reduce or outright eliminate an enemy line or two, you should take it. Then adjust your strategy according to the units that are still left in play. 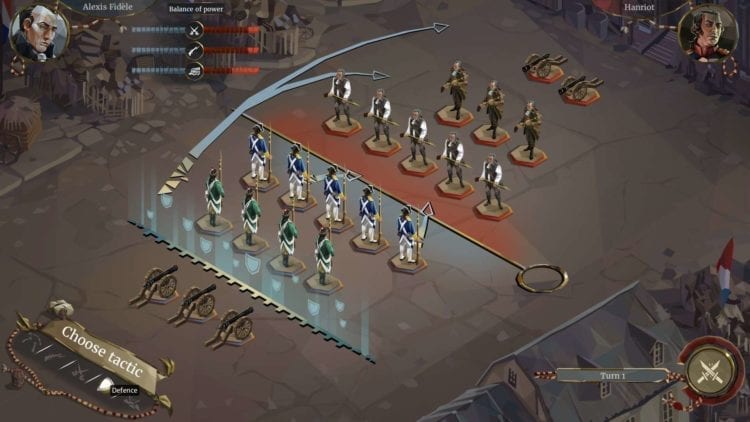 Don’t rely too heavily on defense.

Despite the variety of tactics, there’s usually little sense in playing a defensive game. The defensive bonuses are negligible, especially when the armies are at full strength, and may only save one soldier if any. The only time that makes a difference is if you’re outnumbered or if the enemy has heavy bonuses, so take that into consideration when planning your move.

Otherwise, you’ll need to continually be on the offensive, looking to inflict as much damage as possible. Keep a close watch on the units in play. For example, if they have a strong frontline force, then they’re likely to rely heavily on Frontline Assault. You can prepare by using Suppressive Fire to mitigate some of the damage while thinning out his rear lines.

Cannons do a great deal of damage but are relatively easy to destroy, so they should be your first priority. Then you will probably want to concentrate on the enemy’s front lines next, since there are usually a lot of them. Generally speaking, focus on whatever unit the opposing army has the most of and work toward wearing their numbers down. If a line is down to a single unit, then you can probably save it for later while you work on the others. Most times, you’ll want your next move to wipe out the line while inflicting heavy losses on another.

Hit your enemies hard, decimate their forces, and you’re likely to win within a couple of turns. For more information about We. The Revolution, check out our review!