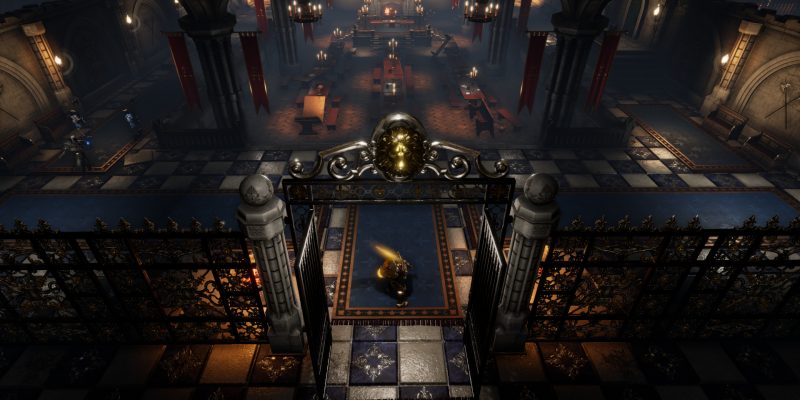 The joint efforts of Obsidian Entertainment and Larian Studios have ushered in the golden age of modern-day CRPGs. Series like Pillars of Eternity and Divinity: Original Sin stand atop a mountain of modern interpretations of the storied genre. Exploring their rich fantasy worlds is undeniably addicting. Wigmund: The Return of the Hidden Knights looks to capture that same magic, while introducing a few new features of its own. These features, namely its gesture-based combat, fail to leave a lasting impression. Instead, its barebones customization and lackluster exploration steal the spotlight.

Wigmund has all the trappings of a classic fantasy world. The classic gray and brown-soaked environments contrast shiny, polished metal accents. The bombastic drums, triumphant horns, choirs invoke the spirit of epic, medieval fantasy. The all-important lore centers itself on dragons, kings, and evil cabals. All the usual suspects made their appearance during my time with the two-hour demo. Throwing you into the third chapter, the titular hero and his band of fighters are tasked with infiltrating a castle. What they hope to find is a mystery; all they know is that the upcoming battles will be hard-fought.

Inside the castle that the demo calls home, Wigmund’s premier features are being suffocated. The areas give little time for any of the game’s systems to show off their worth. The string of battles from start to finish fail to make a case for the novel combat system. Generic dialogue, gearing, and progression systems have little to differentiate themselves. Nothing is less than serviceable, but when I’ve seen similar scenarios a thousand times, I expect something fresh. 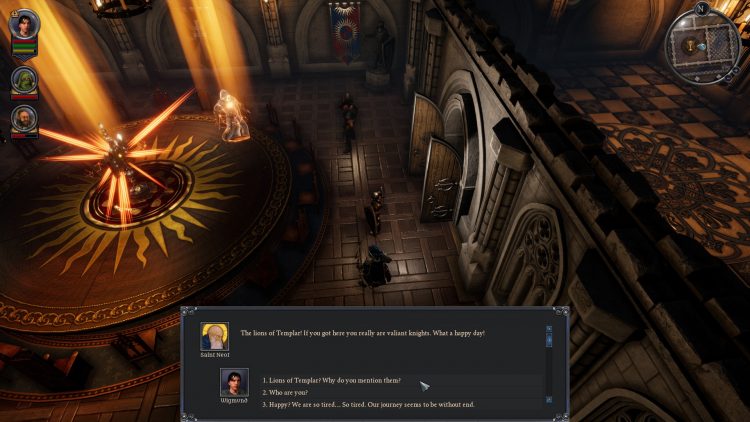 Another day, another glowy artifact.

It’s all in the wrist

At the center of The Scholastics’ CRPG revitalization project sits Wigmund’s gesture-based combat system. The game encourages the use of mouse movements in tandem with keys, hoping for a more involved moment-to-moment experience. The product, however, is not a robust, new means to do battle, but rather an awkward, uncomfortable one. Holding down CTRL primes Wigmund for combat, locking him in place and swapping out point-and-click movement for a new moveset. While attack mode is maintained, the left mouse button in combination with directional mouse swipes produces a variety of attacks. Similarly, dodges and blocks can be performed using the right mouse button.

For example, stabs demand an upward swipe while sweeps require horizontal swipes. Immediately noticeable are how moves like the stab are independent of the direction Wigmund faces. Moving the mouse upwards to attack an enemy below is a uniquely jarring experience. You have to fight against what feels natural to you. I can’t help but think of Bare Mettle’s Examina and its physics-based, mouse-oriented medieval combat. And while that wonky, wacky system served a completely different experience, it was comfortable and intuitive. Much of Wigmund’s controls instead feel cumbersome; combining its mouse-centric movement and combat feels almost counterproductive.

Many tools in your arsenal rarely have any use. The benefits of multiple swing patterns are seldom seen. Enemies appear in groups and give chase upon seeing Wigmund and his two party members. The wide sweep is oftentimes the only attack you’ll need as the swarms of enemies descend upon you. Between tracking projectiles and minimal downtime between enemy attacks, dodges leave you with no time for counterattacks. Blocks are substantially more useful, at least when considering the enemy behavior in the demo. 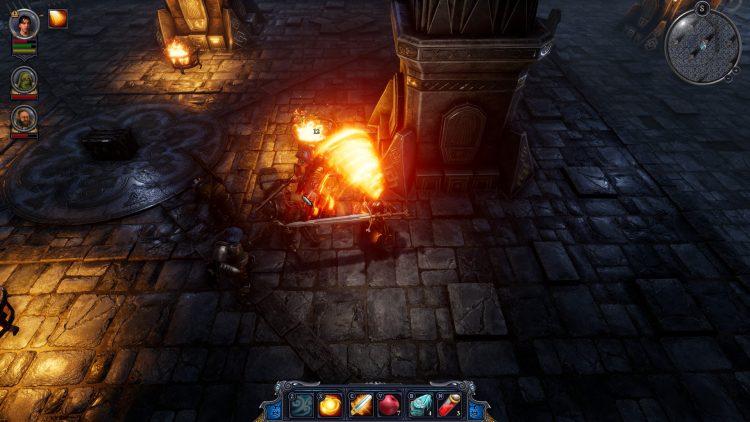 It’s almost as if dodges serve your foes more than Wigmund and his party. Castle guards roll away the moment you begin your wind-up, repeatedly. Chasing the one armadillo of a straggler down castle halls became commonplace. Fortunately, Wigmund gives you plenty of room to fight. The dungeon spotlights predominantly open space while the castle satisfies your need for long, opulent hallways. Their presentation is to be admired, but like their denizens, the maps discourage full use of your kit. Rarely does anything inspire new approaches to combat.

I had access to three skills during my time with Wigmund: two magic skills and one for melee. Magic drains grace while melee skills, sprinting, and dodging take from energy — both of which auto-regenerate. Leveling up rewards you with attributes points to feed classic stats like constitution, strength, and dexterity. These stats beef up a number of parameters, including your energy and grace pool. I saw no signs of a skill tree, which leaves me intrigued as to how Wigmund evolves beyond stat allocation. Gear, found in chests scattered around the maps, perhaps provide more tangible buffs. Upgrading gear provides more potent boons, though that feature was not available.

The agency I enjoyed over Wigmund didn’t carry over to my party members, who committed to their roles as tank and ranged DPS (damage per second). On occasion, I might lose one whenever they decide to lodge themselves behind an open door. But, they remained well-behaved and delightfully useful. Beyond the castle walls are new mercenaries to recruit, though again, this doesn’t appear in the demo. Had these features made an appearance, I’d have more to say about Wigmund’s unique offerings. But, for now, the game’s bog-standard systems shouldn’t be the source of any surprise. 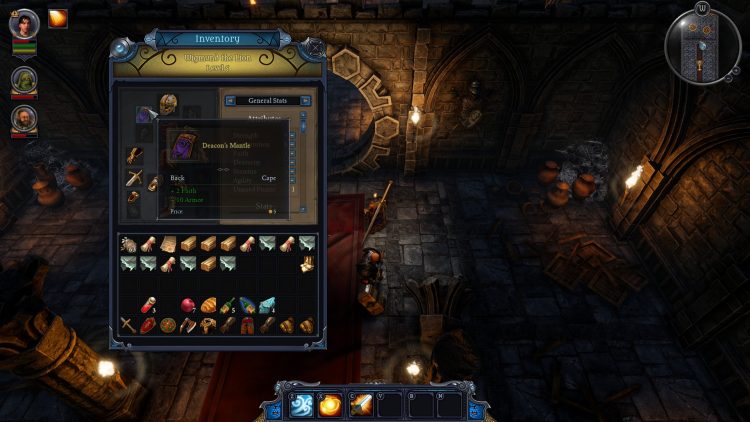 That’s a lot of slots.

A world of limited possibilities

The demo gave me no taste of Wigmund’s open world. Towards its end, however, the game treats me with a more open approach to quests. The quests allowed me to choose the order in which I wanted to approach my objectives. After reading the quest notes, I set off in the direction provided for me. Labyrinthine as the castle may be, I enjoyed the freedom to explore without explicit handholding. More humorous than frustrating, I spent 10 minutes lost before realizing that “SE” and “SW” on the compass were swapped.

The rewards at the end of the tunnel typically came in the form of an axe coming down on my head. Combat is king, though Wigmund spends every second outside of combat on dialogue. Whether it’s a giant exposition dump or simple banter between party members, any change of pace is appreciated. I could do without the walls of text at times, though. Hopefully, in the future, the voice-acted cutscenes will help break up the monotony. It afforded me a number of dialogue options too, despite their weight being relatively negligible.

When the credits rolled, I was left feeling nothing. Wigmund isn’t inoffensive, but what I played is a far cry from the novelty promised. The demo doesn’t give the systems any room to breathe. Its features haven’t spread their wings — at least not in a flattering way. What you have is a standard CRPG like many of the ones you’ve played before. It offers nothing that modern-day CRPGs aren’t already excelling at. It may evolve into the bigger and better beast it claims to be, but what’s here now is certainly not that.