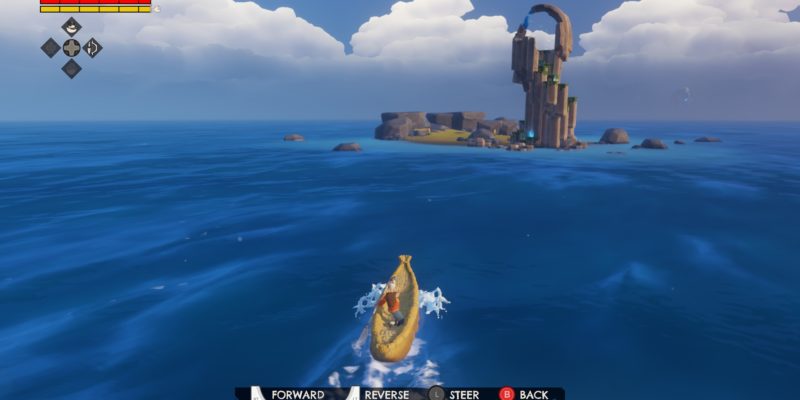 There’s something innately satisfying about setting a course on open waters while keeping an eye out for land on the horizon. Windbound, a survival game with an awful lot of sailing, is aiming to give players all of that and more when it releases later this month. I got to take a peek at part of the game and am already fairly fond of what I’ve seen.

Much like many other survival games, Windbound isn’t interested in telling you exactly what you’re supposed to be doing. After a brief cutscene where the protagonist known as Kara is shipwrecked, you’re put in her shoes and taken to an island. While there is a clear objective, the game doesn’t tell you what that is. You start slowly, get a feel for things, explore a bit, and then stumble upon what it is you’re supposed to be doing along the way.

As Windbound is a survival game, Kara gets hungry with some regularity. As her hunger increases, her available stamina decreases. Unlike many similar games though, the hunger gauge’s depletion doesn’t feel as ridiculously sped up here. You can find bushes with berries growing on them, plus large trees with mushrooms on them that you can eat. Naturally, you’ll get much more sustenance from meat. 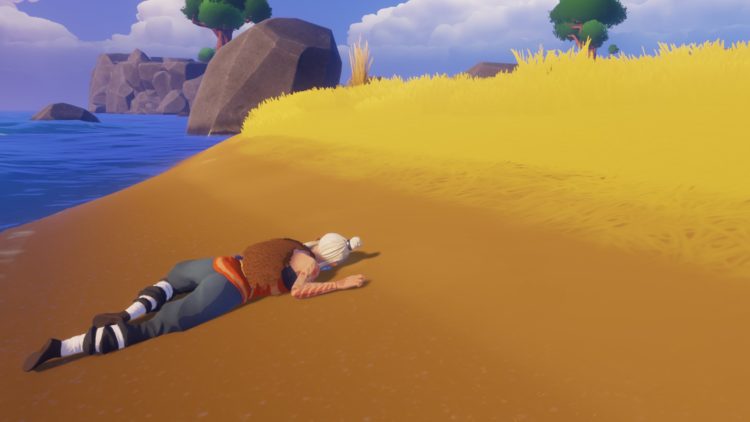 The beginning patch of land has some boars running around on it. Luckily, Kara carries a small knife with her that’s enough to dispatch these creatures. They tend to drop meat, although sometimes they don’t, which is impressive, considering that they’re made of meat. You can eat it raw or you can cook it. Notably, you don’t begin with the ability to cook, but you get several crafting recipes upon collecting various ingredients. Also, collecting tall grass is needed to start fires, though it grows all over. Meat takes a while to cook, but it’s worth it as it fills up a significant amount of your stamina bar.

Make it to the top

What are you even doing, though? Well, while exploring, you’ll no doubt stumble upon a tower. Climbing up to the to top yields nothing but a switch you can interact with. Doing so gives you a kind of currency and activates one of the three symbols on the tower. This means you’ve just done a thing and now you need to do the same thing two more times. It’s a pretty vague directive, especially since you won’t know why you need to do this or what these things even are. Still, I appreciated just sitting back and seeing what awaited.

After this, Windbound teaches you how to craft a boat. You put it together with materials and then push it into the water. You can either use an oar to row yourself, or you can make a mast and sails. Sailing works as it does in real life, so you’ll need to keep tabs on which direction the wind is blowing. One of the only things I don’t like is that if you’re sailing somewhere and there’s no wind, you’ll have to dismantle the mast to be able to row. This is a truly surprising oversight. 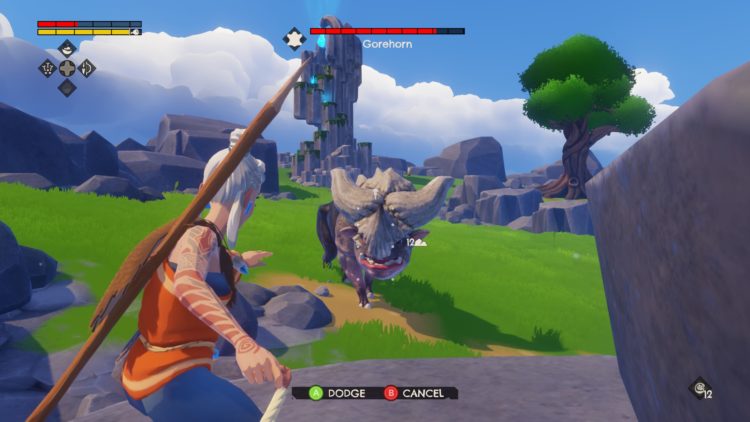 I enjoyed this little taste of Windbound, and I’m rather fond of its calm, low-key nature, even if you can play it with very serious consequences for dying. Fortunately, there’s a ‘story’ difficulty for anyone who just wants to play without worrying. There’s merit in that, as this is a very lovely game that I’m looking forward to putting more time into. The game arrives August 28 on Steam and the Epic Games Store.