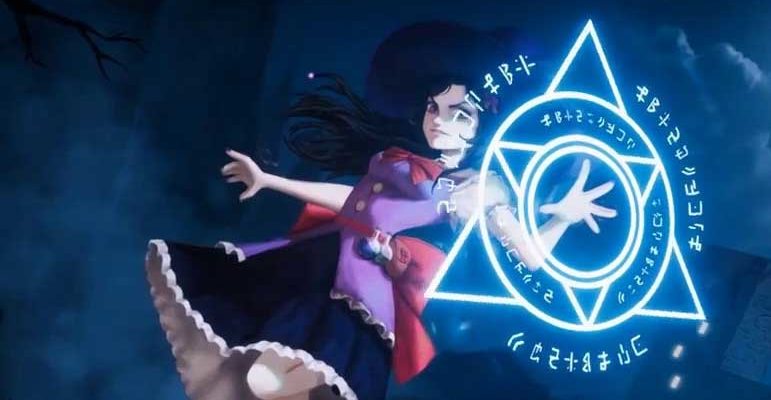 I’ve wondered for a while what a fully 3D bullet hell game would be like. The genre still remains mostly relegated to vertical or horizontal scrolling shooters, and devs rarely want to take it into the third dimension. Witch Thief, however, is a game that attempts to bring the standard shmup gameplay to a place that it might not need to go. How does it fare?

The plot of the game is as simple as these stories get. Years ago, an evil warlock’s power was sealed inside a grimoire in order to contain their threat. At the start of the game, the Witch Thief learns that the grimoire is corrupting other mages and drawing them under its thrall. It’s up to her to free the others and contain the evil once more.

There really isn’t much of a narrative, though. Each of the four characters (three of which unlock while playing the story) have different lines of dialogue. They say these at the start of each of the five stages, and later to each stage’s boss. The boss dialogue also changes based on who you’re playing as. All this dialogue is really generic, however, as are the characters’ personalities. 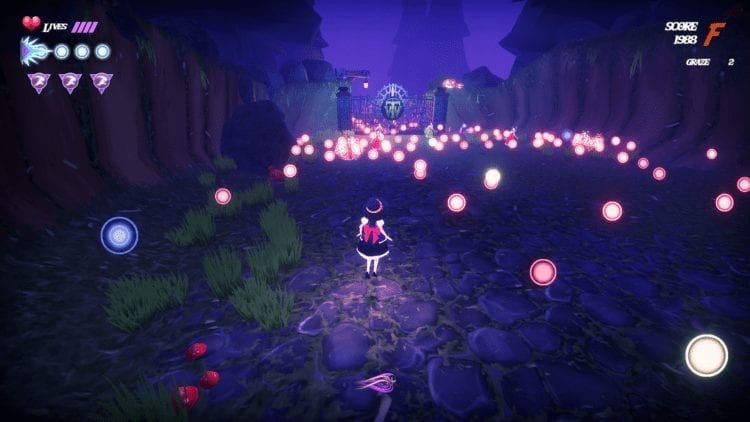 Witch Thief is quite good-looking. Its areas are large and vary a bit. Bullets and spells are all bright and colorful, adding to the feeling of the intense bullet-dodging. The character models are really basic, but that’s fine, as you aren’t often going to look at them up close. The character designs do leave a lot to be desired, however. The characters’ faces in their dialogue portraits are rather weird and unnatural-looking. The game also sometimes includes the wrong character’s portrait during these sequences, and I even noticed one get both characters’ names wrong.

The sound design isn’t great, either. The music is fine for what it is, albeit not particularly memorable. But what I found annoying was the damage sound the bosses make while you shoot them. The voice samples used during these sound really off and are way too close together. It made me mute the game during boss battles after a while.

My biggest issue with Witch Thief‘s presentation, though, is how the screen flashes white every time you lose a life. Anyone who doesn’t do well with bright flashes would best steer clear. The screen also flashes like that each time you deplete one of the bosses’ health bars. And when you beat the boss all the way, the game flashes three times in a row. This often blinded me after a fight and made me lose a life if there were still projectiles onscreen. That led to a really big problem, which I’ll get into a bit later. 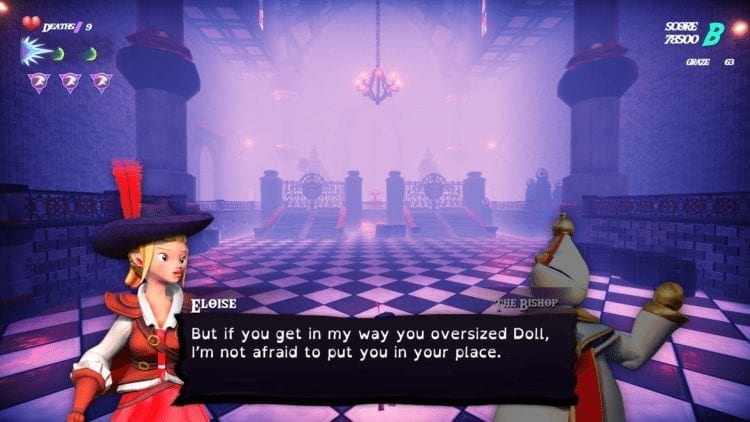 What happened to your faaaace?

Witch Thief deeply roots its gameplay in what you would expect from a bullet hell game. You move to dodge bullets and shoot enemies. There’s a focus button you can use to slow down time and add even more precision to your dodges. You also have a bomb attack, which can prove useful when you become overwhelmed.

The only big difference this game has from most other bullet hell games’ controls is the dodge button. This allows you to become invulnerable for a bit and get out of the way of enemy attacks. It recharges extremely quickly, too, which lets the player lean on it when things get hairy. It’s clear, though, that this mechanic is a crutch because this is one of the most obnoxiously difficult games I’ve ever played.

As said previously, there are five stages, much like many similar games, and multiple difficulty levels. The normal difficulty only gives you three lives and no continues. Sounds kind of insane for a bullet hell game, right? Well, to add insult to injury, the levels themselves can go on for over half an hour. Taking just three hits often isn’t even enough to make it a few minutes. This could be rectified with health bars, healing items, and checkpoints. Bullet hell games don’t typically have extremely long stages, so I have no idea what the developers were thinking.

The harder difficulties seem to exist only for masochists, but thankfully, there are easier options as well. There’s an easy mode that has slower bullets and 10 lives instead of three, while the “chill” mode gives you infinite lives. I think the vast majority of players would need this in order to get through this game. 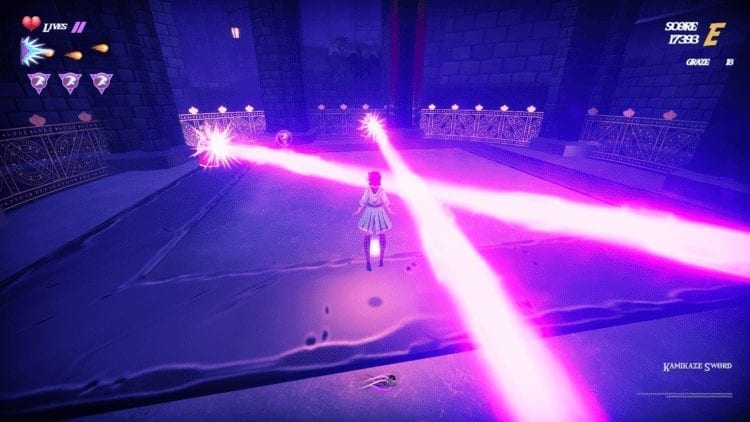 WHAT DOES THE SCOUTER SAY ABOUT THEIR POWER LEVEL?!

The reason bullet hell games are usually horizontal or vertical scrolling shooters is because you need to have a full view of your surroundings. Witch Thief plays in the third-person, so not only did I find it very difficult to keep an eye on my surroundings, but enemies and projectiles frequently spawned behind my back with absolutely no indication. This led to many, many lives lost from attacks I simply couldn’t see. The massive size of some areas is also detrimental to this. The camera sticks to your character’s back, so you rarely have a clear view of everything.

This game has bullet grazing, but unlike the games it takes inspiration from – where focusing clearly shows your hitbox in order for you to navigate the bullets – the characters in Witch Thief are just giant bullseyes. And it makes no attempt to explain how you’re supposed to graze or even how you’re supposed to survive its massive amount of unfair, broken encounters.

The shooting doesn’t feel good either. Almost every attack feels weak, small, and practically useless, save for the beam attack. Each of the four characters has a different default attack, but only one character – who unlocks after beating the game – defaults to the beam. To make matters worse, bosses have enormous health bars. 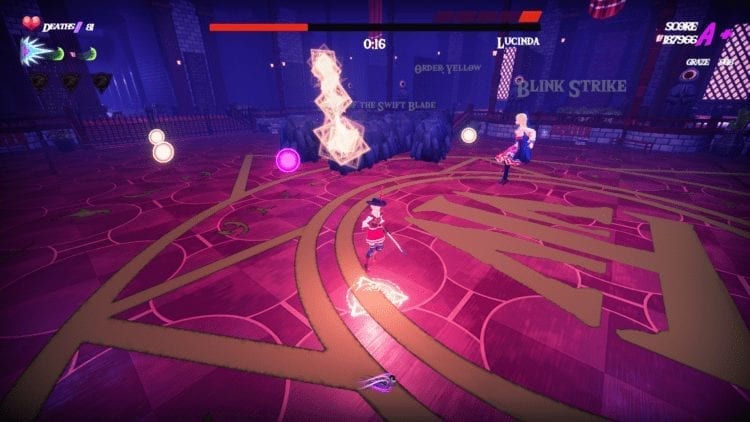 I cannaht heet her, I can naaaaht. O, hai, boss!

Taking a boss down with almost all of the attacks feels like it takes forever. The final stage took me about 50 minutes to get through, and much of it was fighting bosses with five health bars. If I ran out of lives I had to go all the way back to the start.

Only one character has a bomb that’s useful against bosses, but even that has giant caveats. Eloise the sword maiden’s bomb allows her to flick around the enemy and do a fair amount of damage, but after the attack, she returns to her starting point. If there are bullets or traps at that point, you’ll lose a life as soon as the bomb attack ends.

The absolute worst thing, though, is a glitch that occurs if you get hit by a projectile right after defeating a boss. I had to restart one stage multiple times because I beat the boss and got hit during their defeat dialogue. This froze the dialogue on the screen and stopped the end trigger from happening. All I could do at this point was restart the stage. The screen’s flashing after defeating the boss made things even worse, as it blinded me and made it that much easier to run into enemy fire. In an already maddeningly difficult game that forces you to replay long levels with barely any lives, this is simply unacceptable.

Witch Thief just has the story mode with five stages. Score chasers might find a good amount of replayability, as each stage is ranked. But with the small pool of lives and insanely long levels, I don’t see many people pushing through this absolute mountain of frustration.

The game is also just extremely short in general. That’s fine for many shmups, seeing as the genre focuses on being well-paced and tight. But this game has horrible pacing, with very long sections that drag on and make the game even more tedious. 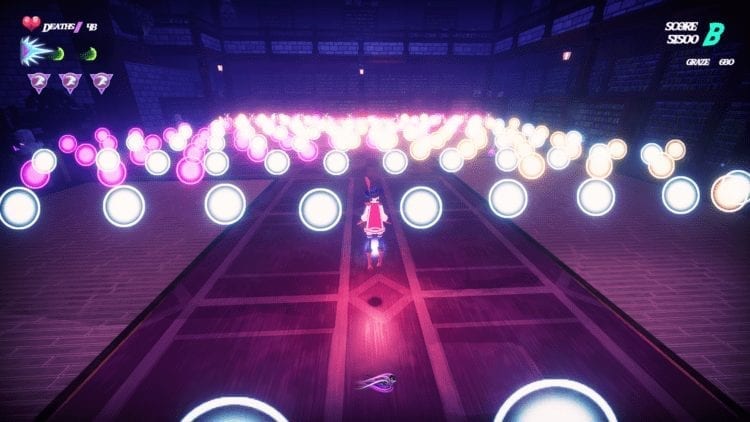 There are definitely things I like about Witch Thief. In some respects, it nails what it was going for. But it also absolutely fails to understand the design philosophy of the genre. With checkpoints, more satisfying shooting, and the ability to know when attacks are coming from behind, this could be a really fun game. But as it is, I simply cannot recommend it to anyone who isn’t a glutton for punishment.

This game needs to go back in the oven because even though it launches today, it’s got too many problems to justify a purchase. I hope the devs make changes and things get better, but if they don’t, stay away.

Witch Thief has some good ideas and is fun at times, but it's poorly thought-out and extremely frustrating, even considering the bullet hell genre.

By Will Backus7 days ago
Reviews