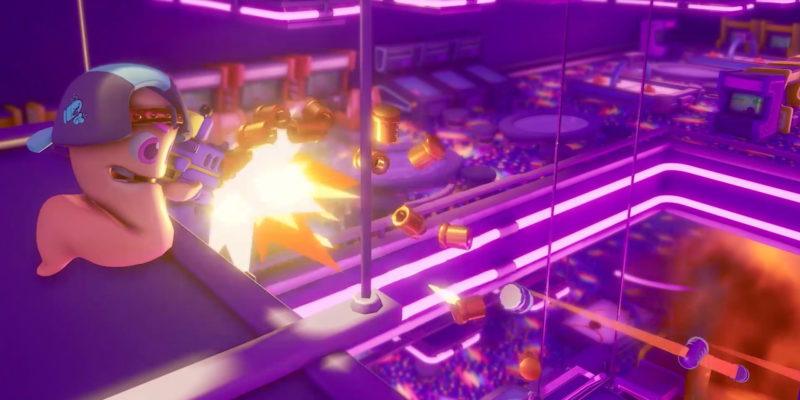 Team17 has announced Worms Rumble, a real-time Worms game with both Battle Royale and Deathmatch modes. Set to release in late 2020, the game is coming to Steam and will feature crossplay with PlayStation 4 and PlayStation 5.

For the first time ever, Worms will have real-time combat. That’s probably good, because a turn-based Battle Royale with 32 players would mean a lot of waiting otherwise. But real-time is a big departure from the iconic turn-based series.

“We of course love the turn-based versions of Worms and it’s what we’ve done for so many years,” Team17‘s Danny Martin explained. “But we’ve always wanted to push the envelope that little bit further and scratch that “what-if” itch. Sure, we’ve done spins offs of Worms before, but we wanted to go all out and see if we could pull off a real-time version of Worms.”

He continues to say that the team was naturally worried, but it quickly got that “one more game” feeling. Of course, the game will take some changes to make it work. The worms can now do wall jumps and rolls for increased movement speed, and they’ll crawl faster in general. Team17 had to find a perfect balance to give it the right feeling. Even so, the question remains as to whether it will feel like a Worms game. You might have worms, their iconic quotes, and well-known weapons, but if it doesn’t feel like a Worms game, it will risk losing its fanbase.

Fortunately, although it’s not obvious from the trailer, there will be environmental destruction, as confirmed by Team17 on Twitter. The team will show the extent of this destruction, as well as other information, over the next few months.

And of course, what is a Battle Royale without customization? Worms Rumble will feature the expected customization such as headwear, weapon skins, emotes, and more. And if you don’t enjoy Battle Royale? Then Deathmatch is there for you as well. You can now wishlist the game on Steam.