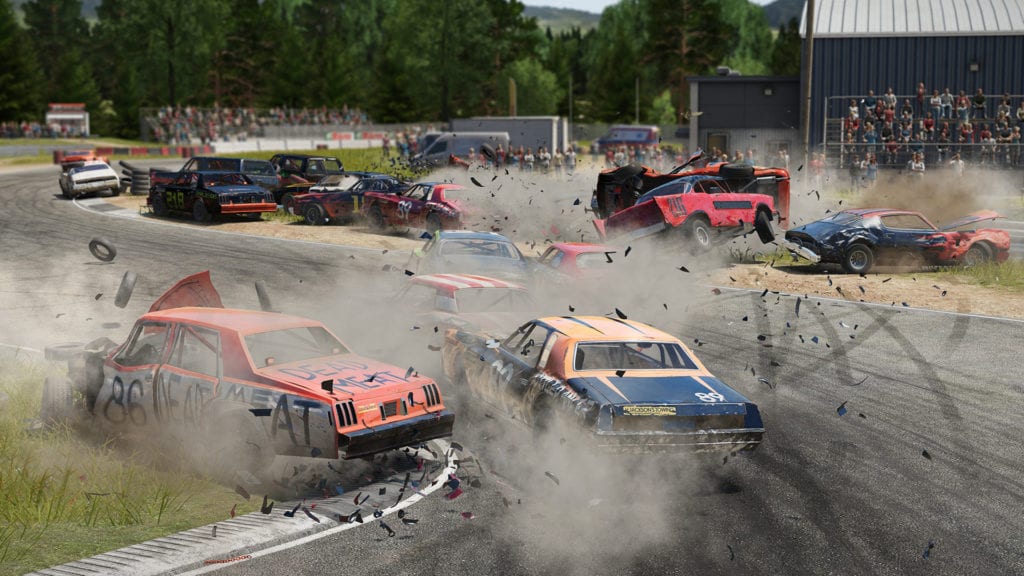 There are plenty of racing games around but games that encourage you to smash the crap out of your opponents are few and far between and as luck would have it that’s exactly what Bugbear want you to do in their latest offering. Bugbear has finally released Wreckfest after a long spell in Early Access. It’s been a long time coming and the final released version looks a lot more polished.

Wreckfest comes with a single player career mode with various tiers to play through, five in total ranging from Regional Juniors to the World Masters. Within each of these tiers are numerous race types in which you need to score as high as possible to unlock more races and ultimately higher tiers. It’s typical racing game progression where you earn cash and experience to unlock and buy more stuff like car upgrades.

The single-player campaign is surprisingly addictive and that’s purely down to the gameplay and challenges set during each race. The game will pop up extra challenges such as wrecking X number of cars or making X number of cars spin out encouraging you to drive like a maniac. Should an AI player get in your way and deal loads of damage that AI car then becomes a rival with the name above the car turning red giving you an extra target to aim for in a race. Even though it’s AI, it can still annoy you enough so you want to chase the car down and bash the crap out of it.

The reason this works so well is the sheer detail of the damage. Bugbear has made sure that metal parts, wheels, barricades, tires, wood, and well, anything that could be deemed destructible on and off the cars, will fly all over the place and litter the track with stacks of debris. This makes you feel powerful but at the same time a little precarious because at any point it could be your car that’s falling apart depending on how hard and where you have been hit. Your own driving skills, (or lack of), will also determine whether you make it to the end of a race or not.

As this is essentially a destruction derby game, there are of course arenas where players go head to head to simply bash the living crap out of each other. I will say that while some gamers will get a kick out of smashing each other up in a reasonably small arena, these battles are the least interesting of what ‘s on offer in Wreckfest. It’s fun for a few matches but then you’ll get the urge to head back onto the tracks which are far more challenging and require a lot more skill. Still, the game is called Wreckfest so it would be remiss to leave this mode out. 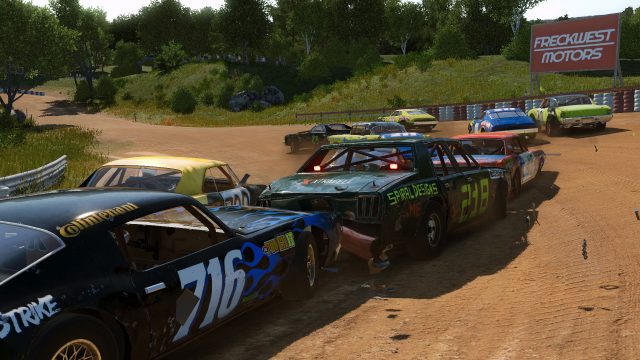 Bugbear has created a solid mix of track types which include the demolition derby arenas, figure of eight tracks, dirt and asphalt ovals, road courses, dirt road courses and mixed surface tracks. There are also route variations on some tracks and tracks can be raced in reverse. There are certainly enough tracks to be getting on with and even the more basic tracks are interesting to race on. There’s a good variety to test all levels of racing ability.

The tracks are well designed with carefully placed objects that can either be smashed into and destroyed or concrete barriers which can do serious damage to you or the other racers you’re jostling with. Every race feels like a challenge no matter how complex the track and it’s this that keeps you playing through the campaign. The AI is no slouch either, it will poke at you continually. You can go from first place to last by making a single stupid error like taking a corner too wide or pushing too hard when overtaking. You really need to have your wits about you at all times.

When you’re not racing there are customisations that can be made to vehicles too. You can tweak the car features such as suspension and differential, you can drive manual or automatic, and you can mess about with the livery on the vehicles.  It’s all easily accessible and not too overwhelming even for someone like me who is not a complete petrol head.

The audio is a mixed bag and sometimes the car engine noises can sound a little tinny but the weirdest thing about the audio is the music tracks which are a weird mix of rock genres, and none of it is particularly good either. I love rock, it’s my music of choice, but what’s been shoved into Wreckfest gets annoying very quickly. At least you can always turn it off.

I’ve been running Wreckfest on a 1080 with everything cranked right up and managed a healthy solid 60FPS, and considering how many cars can be in one race with debris flying everywhere, it’s performed exceptionally well. Lower spec cards may have to dial some of the detail down a bit but overall the performance has been really good and the damage on the cars looks cracking.

For fans of multiplayer racing, you will not be disappointed as there is a load of servers up and running, some more populated than others. Assuming you select a fairly populated one, the racing can be exhilarating. I’ve had games with cars racing buses, buses racing each other, combine harvesters battling cars. It’s been great fun. Moving between races is also seamless. Stay connected to the server and you take part in a race then move onto the next with the same group of drivers. This is great because you start to recognise names of players making the experience feel more alive and stoking your competitiveness. The multiplayer is great and I certainly hope more folk pick the game up and join the action.

Ultimately what makes Wreckfest such an enjoyable racer is the destruction and the physics. The cars feel great to drive, the way they take corners, the handbreak turns, the way they handle jumps, it feels fluid and that’s a huge plus. When put together with everything else in the game Wreckfest is a neat destructive racing package. It’s a little pricey but there’s not much else like it around at the moment which makes it a must-have if you love destruction coupled with racing. All that time in Early Access appears to have paid off for Bugbear.

The Spectrum Retreat launching in July