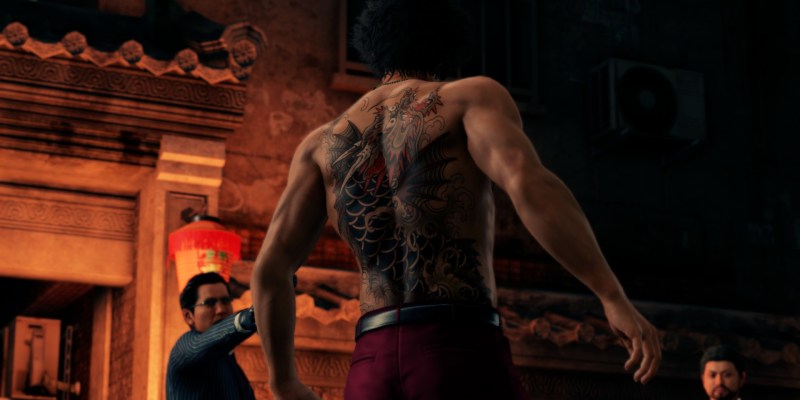 If you’re reading this, you’re probably wondering why we don’t have a full Yakuza: Like a Dragon review. To this, I can only say “It’s coming, probably.” Without going into the gory details, slightly late code and then a full restart of the game near to launch has delayed things a bit. Prior to (or in place of) a full review, we’ll have some other Yakuza-related content going live: guides, features, the tech review, and hopefully more.

I’ve been talking about Yakuza: Like a Dragon with a lot of people lately. For a “cult” series which had a really stagnant initial launch in the west, it has a lot of followers, and that means any new launch triggers a flurry of discussion. And without having gone into any detail with the people I know (I have zero desire to spoil the ridiculous joys for anyone who’s eager to play it), one thing has come up again and again.

People are surprised that it’s a JRPG. A proper JRPG.

Back when Yakuza: Like a Dragon was revealed, it was stated that, yes, the traditional brawler combat would be replaced with turn-based JRPG stuff. You’d have a party, and you take it in turns to bash enemies in the face with traffic cones and bicycles. People know this, but I think what’s surprising many is that this isn’t a Yakuza game with JRPG combat: it’s a full-fledged JRPG within the Yakuza series. 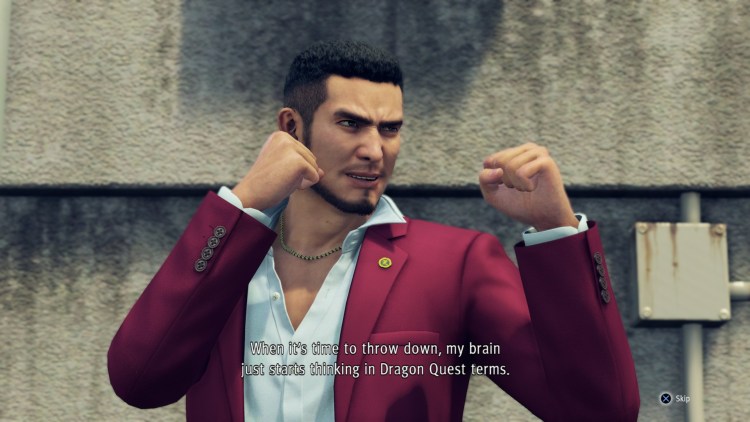 The first of about 12,000 namedrops of Dragon Quest.

Unsurprisingly for a series that dives deep into off-the-wall comedy, Yakuza: Like a Dragon leans knowingly into this from the off. One of the first conversations that new protagonist Ichiban Kasuga has is him detailing his great love for Dragon Quest, and how when he enters combat, he starts thinking in Dragon Quest terms.

On the one hand, it’s a sly nod to why the battles now play out in JRPG format. On the other, it’s also an indication of just how different Ichi is to our past protagonists. (On the third, mutant hand, it’s also an opportunity for someone else to call him a masochist because whenever a fight breaks out he keeps standing still and letting people hit him. Because, again, this is a Yakuza game. Of course it’s going to poke fun at this.)

Combat is earthbound, but out there

Combat itself is, indeed, a turn-based affair, but with a number of Yakuza twists. The environment still matters, for instance. Enemies can be knocked back into traffic for additional damage, and swift attack selection can let allies smack downed enemies. And, of course, Ichi can pick up bicycles and traffic cones in the course of a regular attack, and swing them to inflict more pain. There are timed blocks (think Mario RPG) to increase your defense, plus the usual “mash a button” or “timed button press” to boost the damage of some attacks. Although these can be disabled, if you so desire. The rest of the typical JRPG conventions are there, too, plus a few from unexpected sources. Characters move around idly as you select from your attacks, and plenty of attacks will hit multiple foes if they’re in a tight group. There are the usual status effects ranging from fear, poison, and charm, but they go all the way up to “shitfaced”, which is probably the best JRPG status effect I’ve seen this side of Earthbound.

Thinking about it, Earthbound is a pretty good touchstone for how Yakuza: Like a Dragon handles the quirks of its combat. It’s cheerfully idiotic, but it’s still an actual, real JRPG.

Even yakuza need a job Ichi tends to see people differently if they have a different job. Including himself. But more to the point: stats!

The one feature that shows this better than anything is the job system. Jobs aren’t new to JRPGs — if memory serves, they go back as far as 1988’s Dragon Quest III, if we ignore classes and multiclassing from western tabletop systems — but they’re rarely like… well, like this. I mean, these are actual jobs.

No, literally. The way you change jobs in Yakuza: Like a Dragon is that you actually go to the temp job center. If your various stats and levels are high enough, you can swap to a different one. Some of these are legitimate jobs (foreman, host, chef, bodyguard). Others, like breakdancing, are… a bit more questionable. But all of them have their own stats and skills.

And again, this ties into the ridiculousness inherent in the game. One character starts with his job class being, effectively, hobo. This is pretty much a mage class. He can fling beans at enemies, which causes them to get attacked by a swarm of pigeons. Another class can spray a champagne bottle at foes, inflicting water damage with a chance of making them shitfaced or giving them a cold. One of Nanba’s character abilities (available regardless of his job) is to pull out a cardboard mat and have a mid-combat nap to heal up.

But for all the silliness in Yakuza: Like a Dragon‘s jobs, you can find parallels with classes in more strait-laced RPGs. You’ve got the tanky classes that can draw enemies to them, the glass cannon damage dealers, the casters, the thieves, and the slow-as-hell ones with huge weapons. You’ve got the weird hybrid classes, and the ones that focus on status ailments. It’s just that here they’re markedly ridiculous, at least in part because of the way Ichi kinda spaces out in battle and sees enemies and allies alike “transform” when combat starts.

And that’s just the combat system. I can talk about how enemies have punny names (“Hammeredhead” for a drunken foe being a personal favorite), or the crafting system, the stats, and the equipment. Some of this was always in Yakuza, but not quite to this extent. Equipment, for instance, never mattered nearly so much as it does here. And of course you can burn people with a flambé torch.

But let’s skip over that and talk about something else that’s I’ve seen discussed a bit, which is the Persona similarities. There are two bits here that borrow, sort of, from the more recent entries in Atlus’ Shin Megami Tensei spin-off series. One is the bond mechanic, and the other is the personality traits.

As you do basically anything, Ichi’s personality levels up. He gets more confident, more charming, more stylish, and more kind. These have an impact both in and out of combat: in combat, these increase his resistance to status effects. Out of combat, they give access to more jobs and also open up new little side-areas and activities.

One non-spoilery example: you’ll find a ladder near a bridge, but approaching in results in a burly man preventing you from going any further. Unless Ichi has a Confidence of 4 or higher, he’ll be too intimidated to demand access. 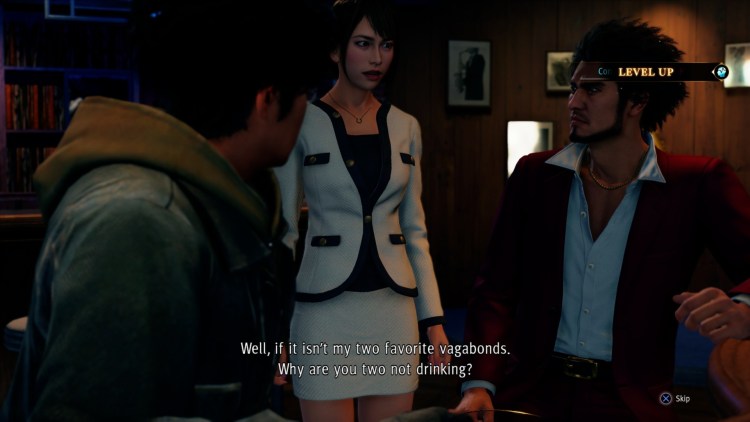 Bond events give you the chance to improve your personality, too, but the dialogue is the real reward.

Unlike Persona 3 to 5, though, raising these stats isn’t really something you need to focus on. Early on, it looks like they’ll depend on dialogue choices and maybe taking classes (which, yes, is a thing you can do.) But once you hit chapter 5 you’ll get deluged in these points from doing basically anything. Eating at restaurants, beating a certain number of enemies, playing minigames, taking taxis, and walking a certain distance will all increase aspects of Ichi’s personality.

Then there’s the bond mechanic, which I’ve seen likened to Persona’s social links. That comparison is a little closer to the mark. Raising a bond level — via combat, a good meal, or party chat (hello, Dragon Quest and Tales of) — opens up a conversation in the party’s hangout, which advances a little mini-story between Ichi and that party member. This has gameplay ramifications too, of course. Party members with a higher bond can access more jobs, gain more experience when not in the active party, and I think have a higher chance of following up after other members’ attack. Still, like with the above personality stuff, it’s definitely more of a side thing than a driving force of the gameplay. This is about the 40th namedrop.

For all of this, though? This is still a Yakuza game. It’s still a really solid and surprisingly heartfelt crime drama with twists, turns, and betrayals aplenty. It’s still got dozens of minigames, both big and small. You can spend 20 minutes playing baseball or two hours managing a company, while you’re supposed to be doing something far more important.

So yes, Yakuza: Like a Dragon is a JRPG. A real JRPG. It hasn’t just switched over to turn-based combat and called it a day; some serious work has gone into moving this long-standing series into an entirely new genre. But for all of that, it’s still a Yakuza game and it hasn’t lost any of its roots. The brilliantly punny name doubles down on this. The subtitle Like a Dragon references Ichi himself; the Japanese series name (Ryu ga Gotoku, which means Like a Dragon); and also the fact that this is like a Yakuza game, but is something a bit different. The fact that it’s managed to move over to an entirely new genre while still retaining everything that made Yakuza into Yakuza is nothing short of a marvel.