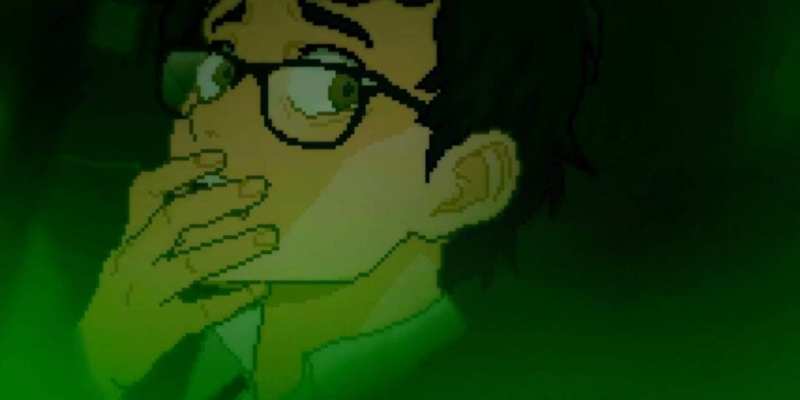 Brian, you see, is a relative nobody with basic schooling… who suddenly gets an invitation to work at Sintracorp, one of the world’s largest corporations. For context, this is like a fairly mediocre student finishing high school and then getting a letter from Google or Apple saying “Hey, come work for us.” Unfortunately, this is far from the strangest thing about Sintracorp, and Brian’s soon thrust into a surreal spiral of madness and horror.

The job he’s hired for? KILL THE WITCH. Which he discovers because it’s daubed in blood across a giant, static-filled TV screen in the (otherwise empty) CEO’s office. And then it gets worse.

A Job In Management 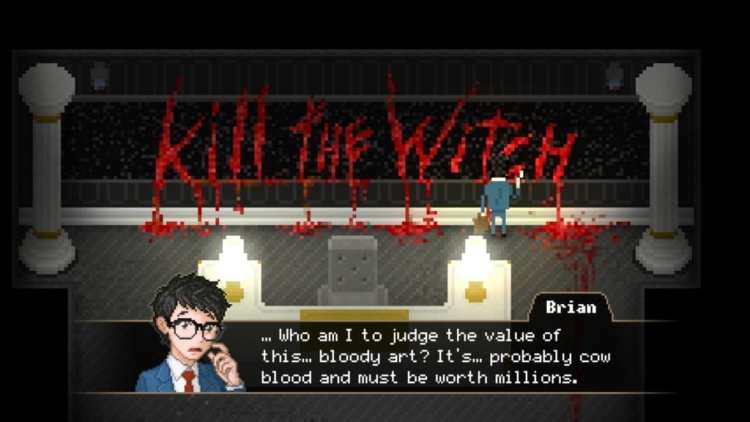 Yuppie Psycho is a top-down survival horror game with heavy retro leanings, and it takes all of these elements very, very seriously. The screenshots alone should give you a pretty good taste of how it looks, so the “retro” part doesn’t need much explaining, although the aesthetic design is really rather lovely.

The survival horror aspect is where things get interesting, though. The inspiration here is very much old survival horror games, where resources are finite and must be carefully used. You save your game by photocopying your face onto Witch Paper (which photocopies your soul, providing an in-game explanation for reloading)… but Witch Paper is limited, and some photocopiers aren’t active until you refill them with an ink cartridge.

Health restoration items, batteries for your flashlight, and offensive items — which are only really useful against one enemy type — are equally limited. This works to create a pervasive, nagging sense of uncertainty. On the one hand, you want to save after (and probably during) every section, and refill your health after taking damage. But while you could drink that cup of water now, it might be better to save it so you can brew it into coffee later for a bigger health boost.

It’s actually pretty well balanced, though. While there are always fears that you’ll run out of these nigh-essential items, there are just enough scattered around that you’re generally fine. It’s probably not ideal for people who can only play in short bursts but, for the rest, the system is rarely frustrating and just adds to the tension. 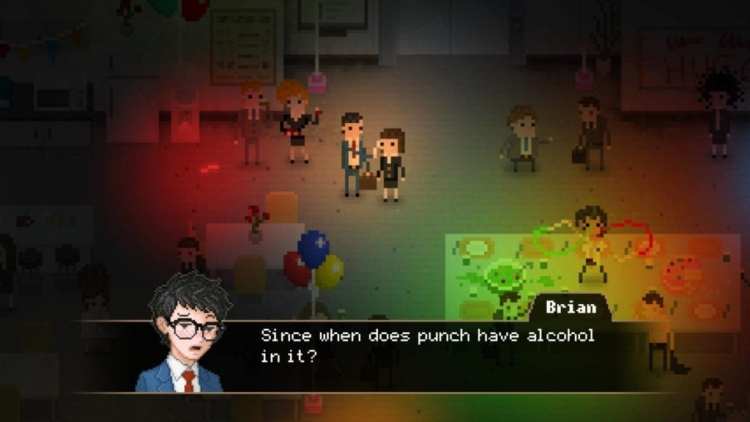 But most of the tension comes from the environment and the atmosphere it builds. You have access to almost every floor in the building from the get-go, and it’s clear that things are very, very wrong. Most employees are little more than zombies, shuffling back and forth. The talkative ones aren’t much better: each seems off in some way, and you’re told early on not to trust anyone. Not only could anyone be under the sway of the Witch, but anyone could be the Witch – and she’s always on the lookout for Witch Hunters.

The intake floor is cramped by people just milling around, shoving each other out of the way. The mist-filled “garden” has trees growing inside the building, and even contains a full-fledged graveyard. Bathrooms are never happy places in survival horror games. And when you wander into the sealed-off office in your own floor and find hanging corpses and the word “RUN” written in blood on the wall, well…

As with The Count Lucanor (this game’s excellent spiritual predecessor), light is also in short supply. Much of the tower is swaddled in darkness, and your sources of lights tend to be both directional and limited. Glowsticks are permanent and can be dropped, but they only illuminate a tiny area around you. The flashlight extends much farther but requires batteries. And when you’re exploring a new area and there’s blood on the floor, and everything is in disarray, and you can hear something… well, the fact that your flashlight only points forward won’t make you feel very safe. 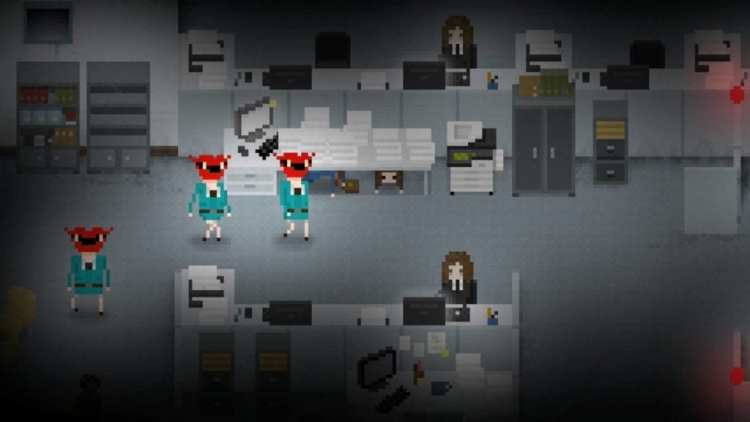 Desks are very useful in offices. Especially because they provide ample places to hide from things trying to kill you.

Which is fitting. Being survival horror, you’re not safe. There are threats of various sorts on most floors, whether mines spewing poison gas when you step near them, or the dreaded “girls” from HR – giant lips on bodies, spewing acidic bile should they spot you.

As mentioned, you don’t really have much of a way to fight back against these foes. One enemy type can be dealt with directly, and there are a few boss “battles” that require clever use of the environment to either damage them or escape. Mostly, though, you’re running and hiding. Thankfully, there’s no shortage of desks to cower under or closets to climb into, and most enemies are incapable of finding you there. Picking and choosing your moments to run or hide are of life-and-death importance, though, and listening to the various sound cues to figure out when enemies are close or what they’re doing matters rather a lot.

The AI pathfinding does leave a little to be desired, though. While some are stationary or only move on given tracks, those that chase you can occasionally get stuck in very annoying ways. One followed me into a fairly narrow area, and while I successfully hid, it never left. It couldn’t. Even though it had stopped chasing me, it couldn’t find a way back to its original position, essentially forcing me to take damage in another attempt to flee.

Puzzling Out Your Job 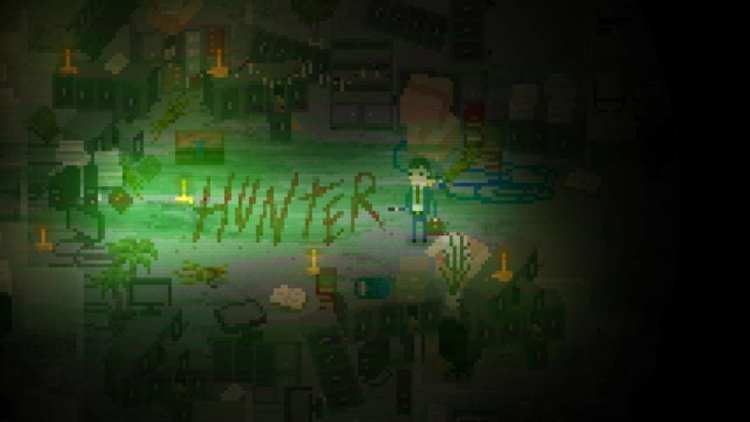 Enemies aren’t the focus of Yuppie Psycho, though: puzzles are. Most are fairly simple – decipher clues, or use a screwdriver on something – but there are a couple of stumpers in here, two or three of which are really clever. Too clever to spoil. I’ll just say that one thing which I thought was entirely trial-and-error actually had a really subtle solution that was reliant on my having paid attention to something else, earlier. This is not uncommon; I made it through one encounter taking huge amounts of damage and I cannot imagine this was the intended solution. I still don’t quite know what the “right” way is, there.

If there is one sizeable flaw here, it’s that the game sometimes lacks direction. Early on, in particular, I spent a fair bit of time wandering around wondering what I was meant to do or where to find a particular item I needed.

Worse, at one point in the end-game, I assumed I’d soft-locked the game by doing things out of order, but it was simply that I hadn’t pieced together a (very clever) clue. This lack of direction isn’t intrinsically a huge problem – it’s just compounded by your saves and health being limited. If you’re wandering around aimlessly, you’re probably taking damage. But you’re also probably finding some extra items or making progress on side tasks. So, when you inevitably reload, you need to remember what you did and where you were simply wasting time. 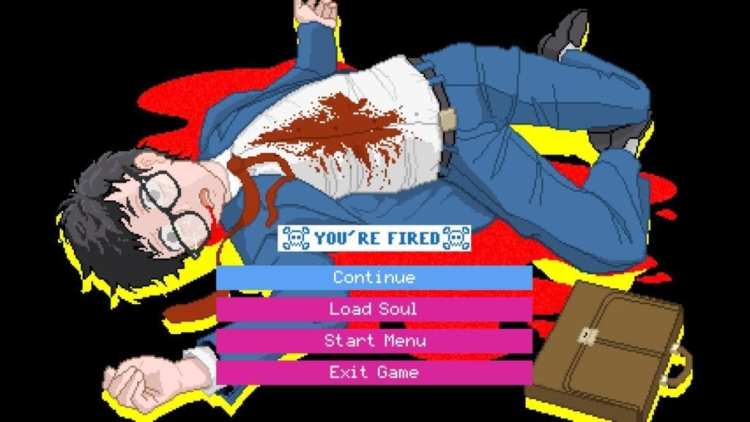 Okay, maybe there IS something odd going on at Sintracorp.

In case it’s not clear, let me put it bluntly: I thoroughly enjoyed Yuppie Psycho and its twisted tale of corporate horror. It has niggling issues, for sure. AI bugs, lack of direction, and one or two really irritating sections sour parts of the experience. Equally, I found the denouement to be a little disappointing, and a few side stories don’t really go anywhere.

But I’d still heartily recommend it to anyone who fancies a slice of fun and unique horror, with a little humor thrown in. The situation is bizarre and the characters walk a fine line between amusingly quirky and outright creepy. And thankfully, Yuppie Psycho relies far more on creeping dread and its unsettling atmosphere than on cheap jump scares. Don’t let the cartoon graphics fool you: there’s some genuine horror to be found here.

It improves on The Count Lucanor in most ways (like the ability to move faster), and that’s saying something since I’d happily recommend that too. Baroque Decay is a studio worth paying attention to, it seems, and this unique, clever, and character-filled twist on survival horror is an excellent reason to start.

Yuppie Psycho offers up a unique, amusing, and genuinely creepy take on survival horror, with some very clever puzzles and a lovely retro aesthetic. Join Sintracorp. KILL THE WITCH.

By Chirag Pattni2 hours ago
Features

By Martynas Klimas5 hours ago
Reviews