For years, now, I’ve been operating under the impression that Zuma is the result of a fever dream. Bear with me:

“So, when I was sick, I had this dream. There was this frog, okay? And he was on this tile, and he couldn’t move, and there was this row of multi-coloured beads that were steadily moving towards a skull. If they reached the skull, then it came to life and ate the frog. Now the frog, he had to make the beads disappear by – no, listen – he had to make the beads disappear by vomiting up other beads at them. When three beads of the same colour touched each other, they just vanished. Also, he sometimes vomited up bombs that blew up the beads.” 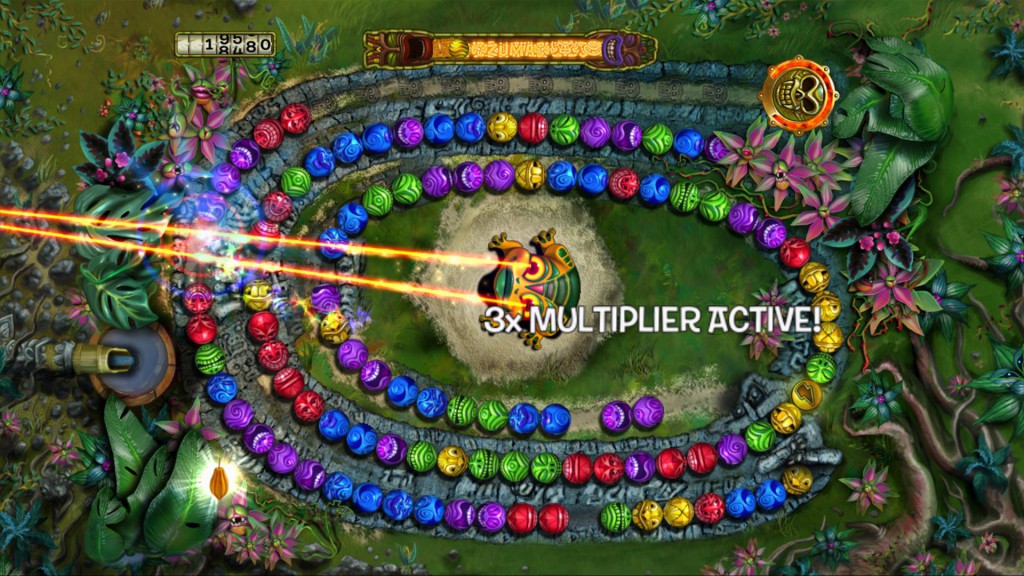 Three years after hitting the PC, Zuma sequel Zuma’s Revenge! – and yes, we’ll be dispensing with that silly exclamation mark from now on – has hit Xbox LIVE Arcade, having already flitted through iOS devices and the Nintendo DS in the intervening time. Embarrassingly, I have absolutely no first-hand experience of any other version of Zuma’s Revenge, so I can’t compare the two. What I can do, though, is tell you about the Xbox 360 version.

Here is my expert description: it’s Zuma. There are a load of new levels, a few new power-ups, and a couple of new mechanics, but it is still most definitely Zuma.

If you’ve somehow managed to avoid Zuma thus far, then you’ll doubtless want to know that it’s a match-three game with a bit of an action twist. As the opening paragraphs detailed, you control a frog who rotates on the spot, firing coloured beads at a row of coloured beads that are relentlessly marching towards an imposing-looking skull. Once you vanish enough of them, the beads stop coming; at this point you just need to mop up what’s left in order to finish the level. 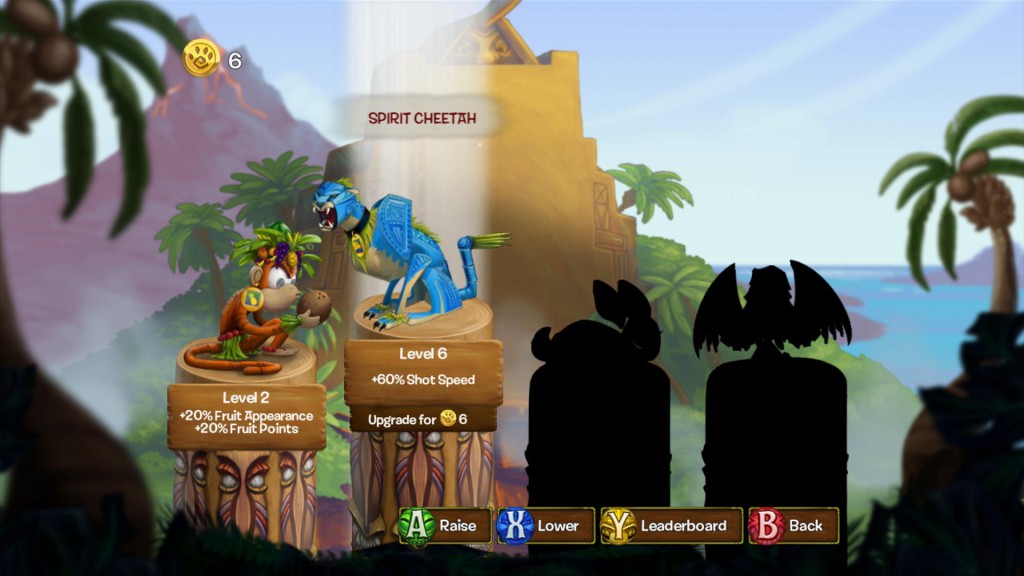 Things are made more complex in that the beads travel in a looping path, so you’re unable to hit distant beads if others are in the way, and – obviously – firing beads willy-nilly just adds to the number on the board and hastens your impending doom.

Thankfully, there are also a few mechanics that are actually on your side. Like colours attract; say you blow up a set of green beads, and the ones on either of that set are both yellow – well,  because they’re the same colour, the beads nearest the skull will be yanked back to the ones farther away, and you can even use this to set up chain reactions. Power-ups will occasionally appear, too, which might slow the progression or even reverse the flow for a few short seconds.

In short, it’s a game in which you’re trying to knock out beads as fast as you can, while simultaneously planning ahead, and – as your beads take a moment to travel – trying not to panic and miss a shot, as that’ll just make things worse.

For the most part, Zuma’s Revenge functions in exactly the same way. 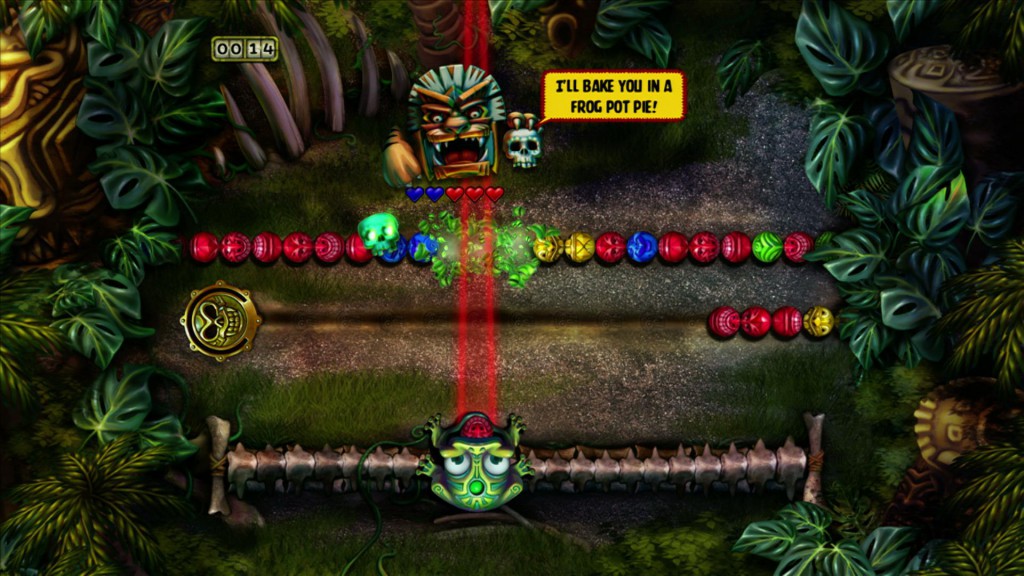 There are a few new power-ups; our froggy hero can gain the ability to shoot lasers from his eyes, picking off particular beads in order to set up chains; he can destroy all beads of one colour currently on the board; he can fire a massive three-way cannon that shreds everything it touches. There are levels in which, instead of being fixed in place and rotating, he slides horizontally or vertically along a line. There are boss battles that task you with shooting past beads at a comical beastie (while still destroying enough beads that they don’t reach the skull). But, for the most part, you’re shooting beads at beads.

The most intriguing new addition is a set of spirit animals that add a sort of light RPG dressing. Completing levels within a certain time, and with a certain score, gets you medals that can be used to power up these four spirits, each of which bestows different bonuses. One gives a flat score increase at the end of each level, while the others increase the rate at which power-ups appear, increase the speed of your shots, or make point-bestowing fruit appear more frequently (and bestow more points). Not game-changing in any way, but a pleasant little extra layer of fluff.

Other than the Adventure mode, which gives you 60-odd levels to puzzle through, there are Weekly Challenge, Iron Frog, and Boss Rush modes. Weekly Challenge picks a level and asks everyone to compete on it across a global leaderboard, which is wiped whenever a new level is chosen. Iron Frog puts you through a course of 10 rather tricky levels, and failing once puts you back to the start, while Boss Rush… well, Boss Rush has you fight through the bosses again. 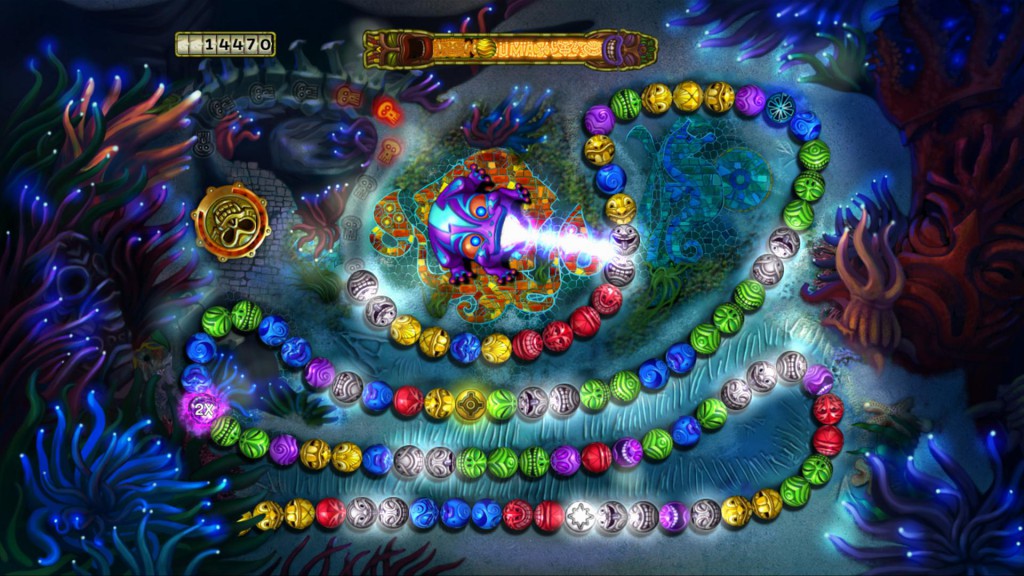 If it sounds like I’m having a hard time getting excited about Zuma’s Revenge, it’s because I am. It’s not a bad game – it’s addictive, fairly fun, and it’s got PopCap’s typical lavish amounts of polish – but it’s extremely similar to its predecessor, and you can comfortably get through the Adventure mode in a sitting or two; levels only really vary in their layouts, and quite honestly, few really stand out as being particularly different from the norm. It doesn’t have the quirky charm or the variety of Plants vs Zombies or Peggle, nor does it have the latter’s exquisite combination of luck, skill, and luck-that-you-can-sort-of-claim-was-skill.

If you want more Zuma, or haven’t played the series before, then Zuma’s Revenge certainly won’t disappoint and 800 Microsoft Points is a perfectly fair price for what you’re getting. If you’ve got a bunch of friends who are likely to chase scores for weeks to come, then the leaderboards of Revenge might help make it a worthwhile and compelling purchase.

If, on the other hand, you already have an edition of Zuma and aren’t desperate for some new levels and a few vaguely new mechanics, then Revenge is likely to fall a bit flat. It really is more of the same and, while Revenge is a decent enough game, that’s not quite enough to make this a recommendable purchase.

What does Boston look like in Assassin’s Creed 3? [Video]

Plants vs Zombies free on Origin