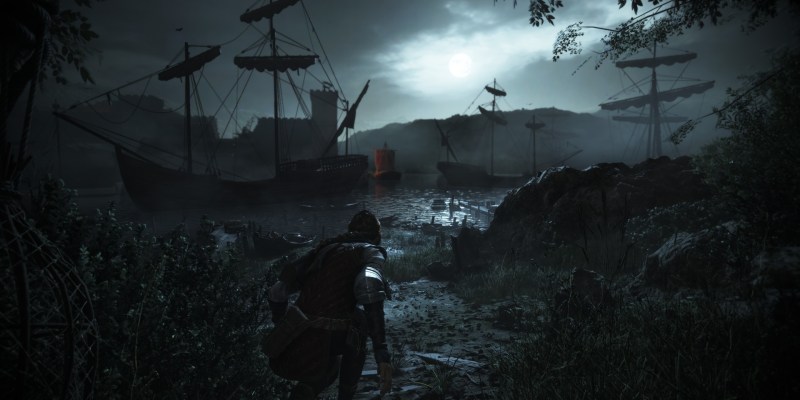 With Hugo still indisposed, Amicia is told that there’s a way to cure him if he can be sent to the Order’s facility. However, you do need to find a boat that can take you there. Here’s our A Plague Tale: Requiem Chapter 4 – Protector’s Duty walkthrough guide to help you with the main objectives in this level.

Similar to the previous levels, you’ll start Chapter 4 – Protector’s Duty in A Plague Tale: Requiem by following Lucas. A curfew is in place, so you’ll have to sneak past some guards. Once you arrive at the shore with the ships in the horizon (seen in the featured image), make a right to pick up a flower collectible.

Continue onward while being as stealthy as possible. You’ll eventually reach a section that’s barred by a gate. Two guards are patrolling here, but there are metal crates that you can use as distractions if you throw a rock at them.

In the next area, the rats will burst from underground. You can toss an Ignifer at the wet ground as it’s covered in tar, setting it ablaze. Use Ignifer on the cart’s brazier as well so you can push it to safety.

Go to the left first and climb the ladder to unlock the workshop. Then, head to the right. Again, you’ll notice more rats, some lamps, and a shack that you can reach.

In the shack, check the metal gate for a lever. Interact with the lever once Lucas is in position so he can ride the platform. He’ll open the large vat of resin for you.

You’ll then learn how to craft tar, creating goop on the ground that can be ignited. Use this in the middle of the two basins to scare the rats.

Back outside, interact with the switch, causing a soldier to pop up. He’s willing to help you out, so just destroy the chain with your slingshot. Here’s the gist for the next tasks:

After exiting the boathouse, you’ll spot the captain. He’ll assist you in taking out the guards that aggro in the dirt path beyond. However, once you approach the clearing, he’ll be too far away.

The clearing has a massive bonfire in the center where all the diseased corpses are being burned. Although there are a couple of approaches, I would suggest sticking to the left-hand side. Use Extinguis and rocks to distract hostiles as necessary. If you manage to make it to the gatehouse without anyone fully aggroed, you should be able to exit this place.

Amicia and Lucas will talk to the captain once more. Suddenly, everyone hears a strange noise. Amicia runs to get Hugo and Beatrice, kickstarting a chase sequence where millions of rats emerge and destroy the entire city. As usual, keep sprinting, watch out whenever the camera pans around, and pay attention to button presses while traversing the area.

Soon, you’ll reach the house and Hugo finally calms down. For the conclusion of Chapter 4 – Protector’s Duty in A Plague Tale: Requiem, you’ll just carry Hugo past all the dead and destroyed sections of the city. Next, you’ll have to sail on a boat while fending off bandits in a chapter called In Our Wake.

Bastion, Torbjörn, and Junkertown scheduled to return to Overwatch 2 next week

Netflix is jumping into the burgeoning cloud gaming industry