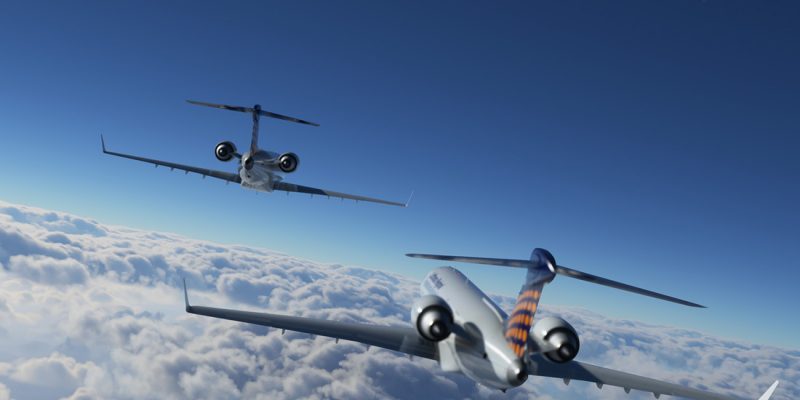 What’s probably been the most anticipated add-on for Microsoft Flight Simulator is finally here: the Mitsubishi (formerly Bombardier) CRJ 550/700 regional jetliner. This is Aerosoft’s first full aircraft add-on for the new sim. It’s also the first “study-level” airliner to come to Microsoft Flight Simulator; a specific pedigree of content that core simmers primarily seek out.

The CRJ was set to release a few months ago, but its launch was pushed back due to quality assurance. Now, it can finally be picked up by anyone daring to learn the ropes and take the shiny new bird out for some serious IFR aerial voyages. It features a highly-detailed model along with high-res physically-based-rendering (PBR) textures. All moveable surfaces have complex animations, and the interior is just as detailed with realistic modeling and animations for the plane’s avionics, buttons, and switches. To really push the realism, Aerosoft has included a fully-functioning FMS (flight management system), EFD (electronic flight display), and other on-board systems. All things considered, while the CRJ is much smaller than any of the default airliners in Microsoft Flight Simulator, it contains the most advanced setup. All of its systems are fully modeled and implemented to take complete advantage of the modern tech that the sim has to offer. There are even eight manuals to study and reference for those who want to learn all of the ins and outs of the aircraft.

Alongside the release of the CRJ, Aerosoft has also formally revealed its price and system requirements; both of which demand a lot. The aircraft itself comes in at $50.99 (USD), nearly the price of the base version of Microsoft Flight Simulator. In order to run it, Aerosoft recommends at least an Nvidia GTX 970 or Radeon RX 590 card with an i5-8400 or Ryzen 5 1500X processor. The CRJ also requires at least 16GB of RAM. As if the sim on its own wasn’t already bringing PCs to their needs, trying to run this add-on just might melt a few cards completely.

The first of many

With Aerosoft’s CRJ now off the ground, this sets the stage for the growing collection of future sophisticated add-on releases. The likes of other companies like PMDG are currently developing other airliner projects, and Aerosoft itself still has more aircraft to bring over like the Airbus A318-A321, A330, and Twin Otter.

In other Microsoft Flight Simulator add-on news, Just Flight recently also had a first release for the sim of its own in the form of the Piper PA-28R Arrow III, a much simpler aircraft than the CRJ. The freeware community also continues to pull off impressive feats like the recent arrival of the Airbus A330 from Project Mega Pack. While not nearly as advanced as what a company like Aerosoft can produce, it still gives simmers on a budget a chance to expand their hangars with competent new birds. That same freeware group is also producing even more exciting models like the Boeing 737-800 and more.