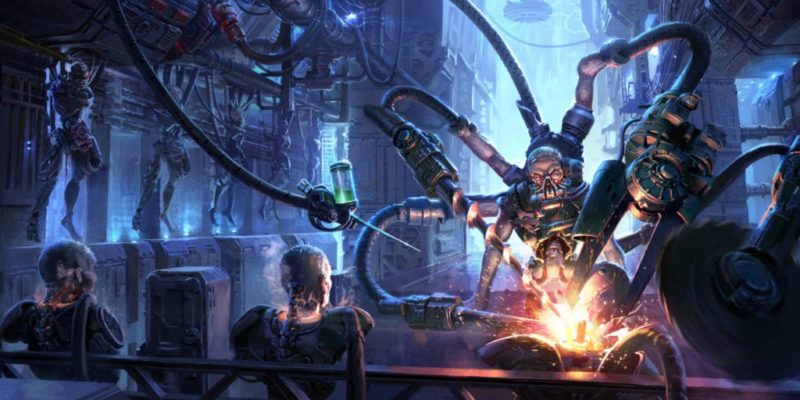 Age of Wonders: Planetfall uses futuristic and sci-fi themes. This is most evident in one of its factions: The Assembly. This race of the cyborg undead is all about boosting its research capabilities as their minions reconstruct battlefield remains. This faction guide takes a look at the best tactics and strategies to maximize your Assembly playthrough. 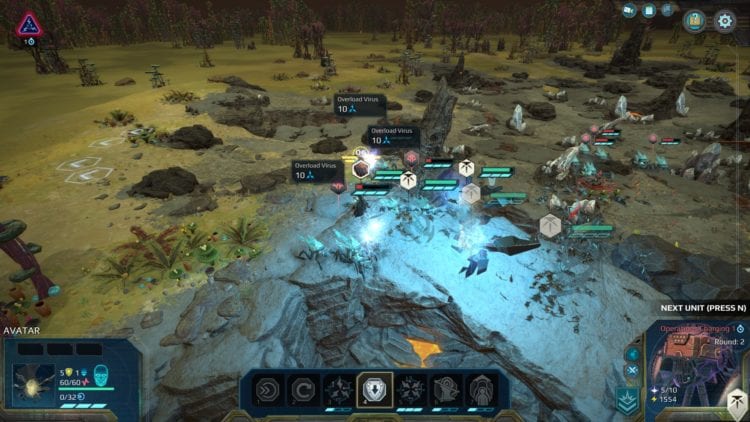 The Assembly faction uses primarily Kinetic and Arc damage. They also have a natural defense against all other Arc damage. Most of your recruits are cyborgs or mechanical. Take note that your desired biome types for your sectors would be Ruins.

In my Assembly playthrough for Age of Wonders: Planetfall, I used a custom hero with Veteran, Military Detachment, Assembly Close-Combat Equipment, and Kleptomaniac. My secret tech of choice, obviously, was Synthesis given its focus on augmenting cybernetic and mechanical units.

Note: Given the crazy research boosts you’ll get while playing as the Assembly (explained below), various secret techs can work well owing to speedily researching advanced units and Doomsday buildings/weapons. 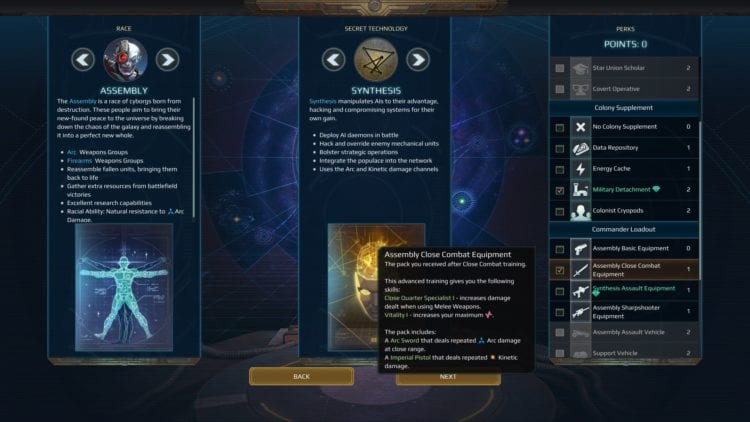 Assimilate, Infantry Commander, Battlefield Repairs, Counter Attack, and any perks that boosted my Commander’s melee capabilities and defenses were my picks in the early game when I had skill points to spare.

I put my commander in the thick of the fighting luring most enemy units, all while my ranged units bombarded foes from a distance. My Assembly commander was also able to heal per melee hit, as well as heal the entirety of his cyborg army after each victory.

By the mid-game, I mostly focused on several Electrocutioner units and maybe a few aerial units for support. Again, since I tried to build my commander (and other heroes) into beefy melee powerhouses that can never die while distracting and laying waste to hostiles, then the rest of my ranged units just brought the lightning from afar. 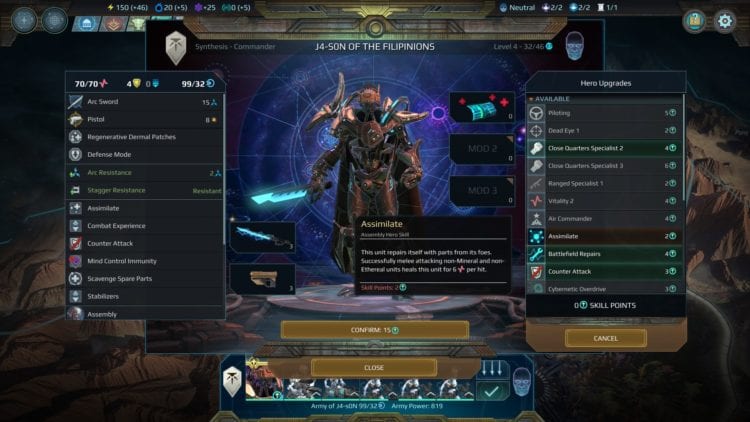 The Military tech (Magnetic Energy Storage) has the Static Build-up Module, a low-tier mod that will serve you well throughout the game. You can equip this mod on the Assembly’s early-game units such as the Inspector and Electrocutioner, and each of their Arc abilities can lower a target’s Arc resistance. The Electromagnetic Utilization tech, meanwhile, lets units such as Vorpal Snipers switch to Arc ammo.

As for your Synthesis techs, Synthesis Integration is the first one you can research. This will give you a choice between an offensive or a defensive mod. If a mod integrates a unit in the Synthesis network, it means future operations that buff/heal integrated units will affect them so long as they have those mods equipped. To be fair, the Synthesis secret tech takes quite a while to start showing its tech magic. One of the mid-game Synthesis techs even provides a mod (Pacification Cypher tech – Total Network Integration mod) that self-ressurrects modded units if they die in combat, while also providing them with immunity to staggers and status effects (basically, everything). 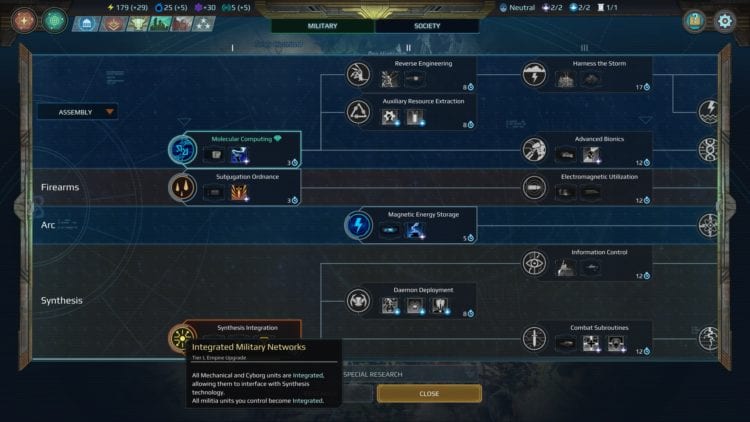 On the flip side, it’s the Assembly’s unique Society tech, Efficient Scavenging, that lets them shine from the get-go. The Battlefield Autopsies doctrine needs to be activated as soon as possible. Each battle you win rewards you with additional knowledge resource, perfect for “teching up” the research trees.

That same tech also gives you the Neural-Interfacing Datacore colony upgrade. Remember that affinity for ruins-type sectors? You gain an extra 10% knowledge for each of these biomes that belong to your colony. Just like the Amazons in our previous faction guide, the type of biomes surrounding you will provide passive boons as you keep expanding. 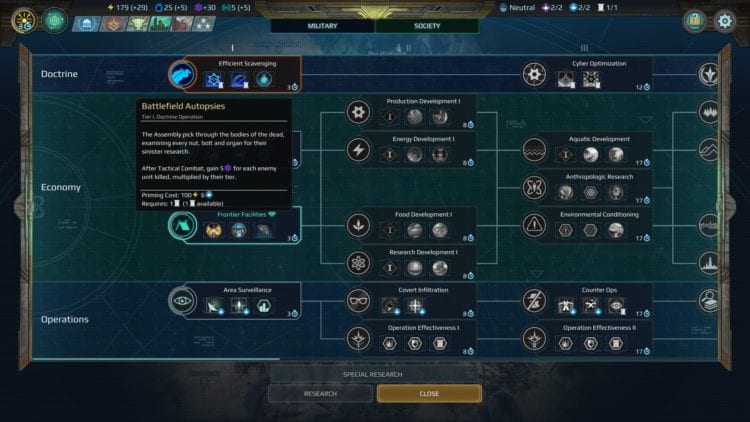 Note: Zoom out on the world map to check the biome type for sectors. If the sector says it has ruins (and you have a lot of these surrounding you), then you’re in a good spot.

Age of Wonders: Planetfall – The Age of the Machine

The Assembly is one of the Age of Wonders: Planetfall factions that will nudge you to go to war often. In fact, you might just want to declare war on AI factions the moment you meet them (especially if they don’t confer the bonuses you want). The reason for this is because of how you need to keep attacking and winning battles to gain knowledge/research boosts.

If you still want to befriend neutral AI minors, then the Autonom faction should be the priority if you spot them in the game. Every unit provided by quest completions or outright buying them would be mechanical in nature (they’re droids, after all), complementing your forces. The Paragon faction might also be helpful due to the Smart Rounds mod which is of invaluable aid to your firearms-based units.

You’re suited for both the Domination and a Doomsday/Tech Victories since you can snowball beyond the AI’s capabilities to reach the higher-end parts of the tech trees. Lore-wise, it fits considering how their race breeds unlife from destruction, reforging themselves anew.

The main downside for the Assembly faction is that some status effects and actions (overload virus, compromised, hacking, and the like) will be of little use if the neutrals/hostiles you encounter have primarily biological units. You’re more effective against your fellow cyborgs and mechs. Still, if you’re using your beefed-up commander as bait while your “zombie Terminators” rain lightning from afar, then you can steamroll the competition with ease. 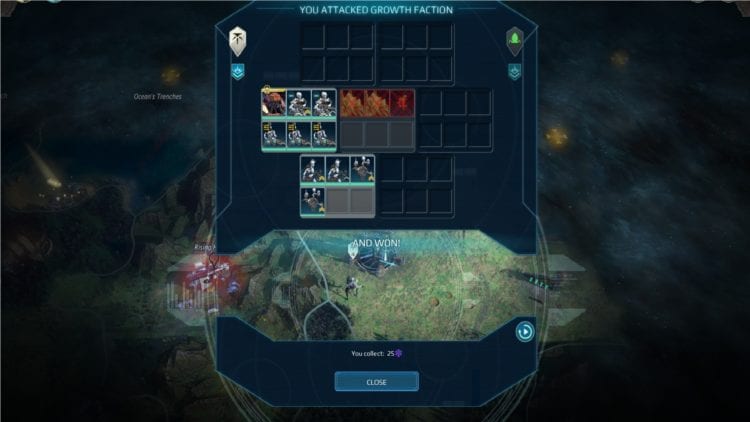