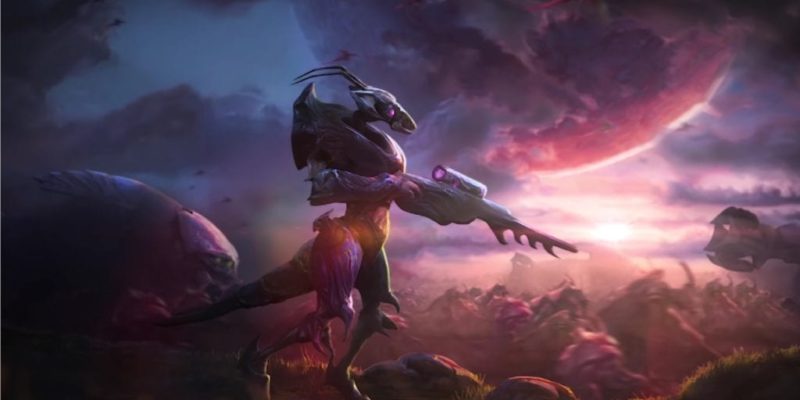 Starship Troopers had its bugs, and StarCraft had the Zerg. Well, Age of Wonders: Planetfall isn’t far behind with the Kir’ko faction. This race of man-sized insectoids can rapidly increase production and colony growth, along with unmatched defensive and regeneration capabilities. This faction guide takes a look at the best tactics and strategies to maximize your Kir’ko playthrough.

Let’s start with the most obvious: The Kir’ko faction has the potential to be nigh unstoppable in your Age of Wonders: Planetfall playthrough. This is because of two racial bonuses — Swarm Shields and improved regenerative capabilities. The first is a passive that grants a +2 bonus to defenses when there are nearby units with Swarm Shields (which is practically almost every other Kir’ko unit). That means just putting units close together is enough to turn them into a balled fist (err, or a claw or pincer) that’s ready to punch through opposing armies. The second is simply being able to heal more after each battle. Both racial boons are further improved by either commander skills or mods.

The Kir’ko use Biochemical and Psionic attacks. The funny thing is that you can safely ignore the latter in favor of the former. This is especially true because in this faction guide we’ll focus on the Xenoplague secret tech (which uses the Biochemical and Kinetic elements).

My experience when playing as the Kir’ko in Age of Wonders: Planetfall was almost eerily similar to playing as the Amazons. In every scenario I played, my core/starter units lasted all the way to the endgame because that’s how good they are. Similarly, I used Xenoplague units that were freely spawning or were getting upgraded after a few battles. For my custom Kir’ko commander, I chose Veteran, Data Repository, Xenoplague Close Combat Equipment, and No Vice. The Xenoplague weapon you get early on is the Pestilence which allows attacks to debuff enemies with Parasitic Infection (more on this below).

For early-game skill picks, I went with Frenzied Assault, Infantry Commander, and Rapid Movements. Likewise, I also chose Fury of the Swarm and Echo of the Hive Mind. Both perks buff every Kir’ko unit for additional damage and defense respectively as long as they have Swarm Shield active (which should, given all the Kir’ko units that have this trait, be all the time). A commander skill, Parasitic Spray, also inflicts the Parasitic Infection debuff via AoE, but this would be overkill already given the tech and mod choices below. The first Military tech choice should always be Regeneration due to the mod you receive. This should be followed by Unshackling for a melee-based mod (yep, we’re going with loads of Frenzied, the cheapest Kir’ko melee unit). Later on, you can consider the Infection and Neogenesis techs as well. Both have hilariously fun mods you can equip on your Kir’ko fodder.

For the Xenoplague secret tech, it’s Alpha Strain Inception followed by Pustule Mutation and Dispersion. After that, you can safely focus on the Destroyer and Plague Lord Mutation techs if you wish. Much later, you can apply the Poison Excretion and Resuscitation Glands mods (from the Infection and Neogenesis techs respectively). The former will have adjacent enemy units taking Bio damage, and your own unit can explode on death, causing even more mayhem. The latter will revive that unit if it dies (retaining the Poison Excretion mod’s effect). Imagine the enemy taking forever to kill a single Kir’ko Frenzied and then dying if they try to keep doing just that.

Society tech tree choices are fairly straightforward. Obviously, the first one to grab is the unique tech for the Kir’ko which is Nurturing. The doctrine (Preserving the Future) and the colony building upgrade (Brood Cluster) are a must for your expansion and unit production. Next up would be the Xenoplague-specific Bio-Matter Repurposing. One doctrine will increase the chances of spawning and upgrading Xenoplague creatures, and the latter (which is unnecessary given your regenerative capabilities) adds healing after battles for every biological enemy you kill.

The other doctrine included boosts your Kir’ko units’ experience gain by 25%. Since army power is determined by multiple factors, including mods and ranks, you can safely use your souped-up core/early-game units, boosting your army’s power, while auto-resolving your way through most fights. Age of Wonders: Planetfall – The Age of the Swarm

The Kir’ko is one of the easiest factions to play as in Age of Wonders: Planetfall. This is especially true for the aggressive expansionists (going “wide”) and fans of melee combat. Your early doctrines and colony upgrades will already help to beef up your hives.

If you’re looking for AI minor pals, then the Growth is usually your best bet. One of the doctrines you can buy provides even more food bonuses for your hives. If you spot them early on, then the Spacers can be of use since one of their mods causes the Debilitating Strain debuff for each hit from a Bio-based weapon.

Along the way, your cheap early-game units will serve you until the very end. Stack them up to gain more Swarm Shield benefits while they regenerate (and/or explode) each turn. To be frank, the biggest challenge you’ll have would be against flying units, so you’ll want to bring some ranged or air units along as support (Kir’ko Hidden), unless you want to “spit” all day at wyverns.

Since we’re using cheap melee units, we can focus primarily on the Xenoplague secret tech’s unique bonuses such as mutations. Many battles that you win, even when auto-resolving, will spawn Pustules, followed by Destroyers and Plague Lords. Have your mutation units following around as support for your main army, auto-resolve a few battles with neutrals, and watch those higher-tier units magically appear. Naturally, you’ll want to give them some Bio-based mods too. Of course, you can also opt to “tech up” the Kir’ko branch to get Tormented or Harbingers, but I found that I was winning games on higher difficulties without even doing that.

In a few dozen turns, you’ll have your new planet “buzzing” with anticipation and the sheer numbers of your swarms. Enjoy the Age of Wonders: Planetfall version of the “zerg rush.”