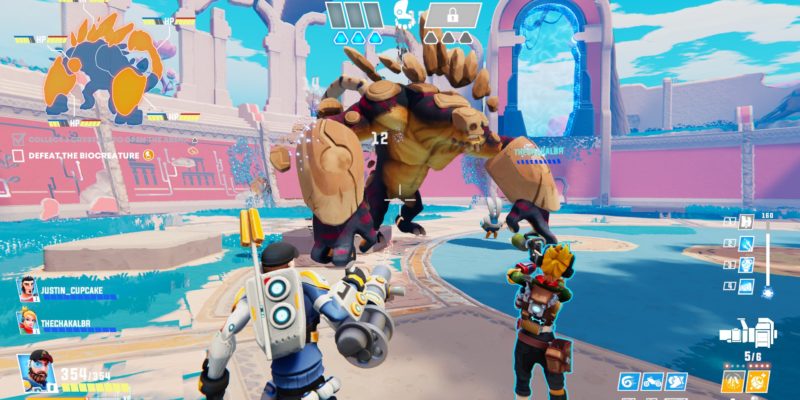 Carving out some market share in the crowded field of multiplayer games can be rather difficult. Overwatch, Fortnite, and Monster Hunter loom large in the genre, with imitators taking occasional fruitless swipes at their supremacy yet failing to strip layers from their hardened scales. “But what if someone tried to combine hero shooter, battle royale, and monster hunting into one game?” absolutely no one asked. The confused reality of Agents: Biohunters attempts to answer this hypothetical.

The closed beta of Agents: Biohunters let me jump straight into matches with five other people. Once in, you pick your hero who is, naturally, part of one of three varieties: damage, defense, or healing. You’re then dropped onto the map. One thing I found particularly irksome was that there was no way to try out characters or their abilities before this. You just have to pick one and hope for the best.

This is complicated by the fact that your hero can’t use any of their special abilities until you level them up during the round. They can have three different abilities and you get one point per level, so you need to level up to put a single point into an ability just to see what it is. There are two healer characters available, with one of them having a healing ability that is marked with a health indicator. The other isn’t so lucky, and I wasn’t even able to figure out which of the three abilities would heal my allies, although it was almost certainly the only one I didn’t unlock. 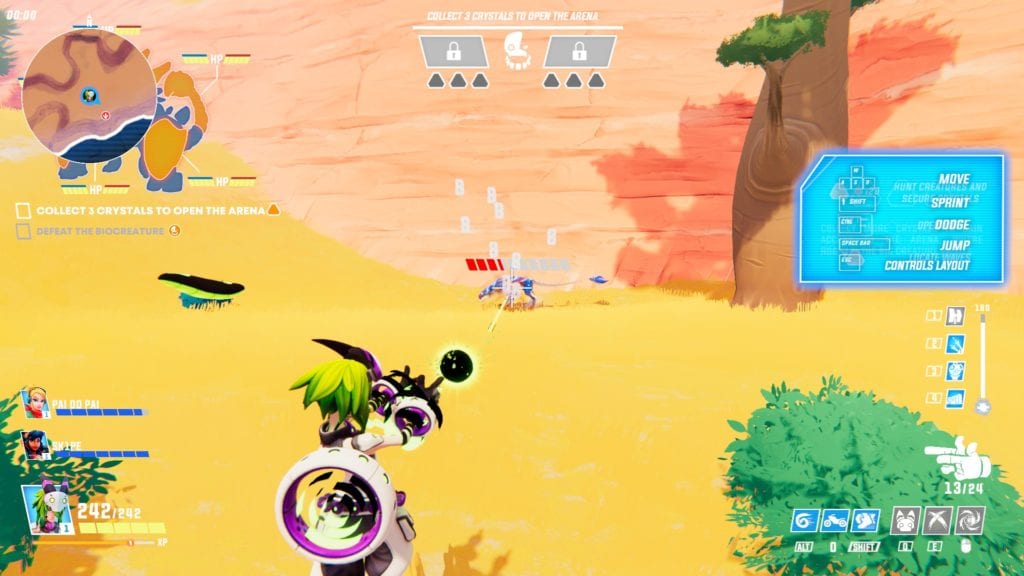 The regular enemies can kill you in just a few hits. Naturally, they’re the opposite. Taking them down is often a chore.

To level up, you need to kill monsters or other players around you. In some matches, I leveled up very regularly. In others, it seemed to take a lot more. Either way, the map is probably a bit too big for just six people, as everybody can just be wandering around without finding each other. There are also way too few enemies about when you’re not in specified zones. The world is just empty.

The structure of each match in Agents: Biohunters is that two teams of three compete to fight and kill a large monster. Once you’re on the map, an icon will show you to an area with high enemy activity. Each team is meant to go and dispatch a dozen of these enemies to open up a capture point. Once the point is open, it’s exactly as you expect. The two teams fight over control of the point and the one that ends up capturing it receives a crystal.

This is repeated twice more, with the first team to three crystals getting to enter the arena and fight the monster. There are issues with some of this, though. For starters, the action was quite poor. The shooting didn’t feel good at all with any of the three heroes I tried. All of the movement feels weightless and dull too. You can temporarily ride a motorcycle to get around faster, but it’ll just disappear out from under you once its time runs out. 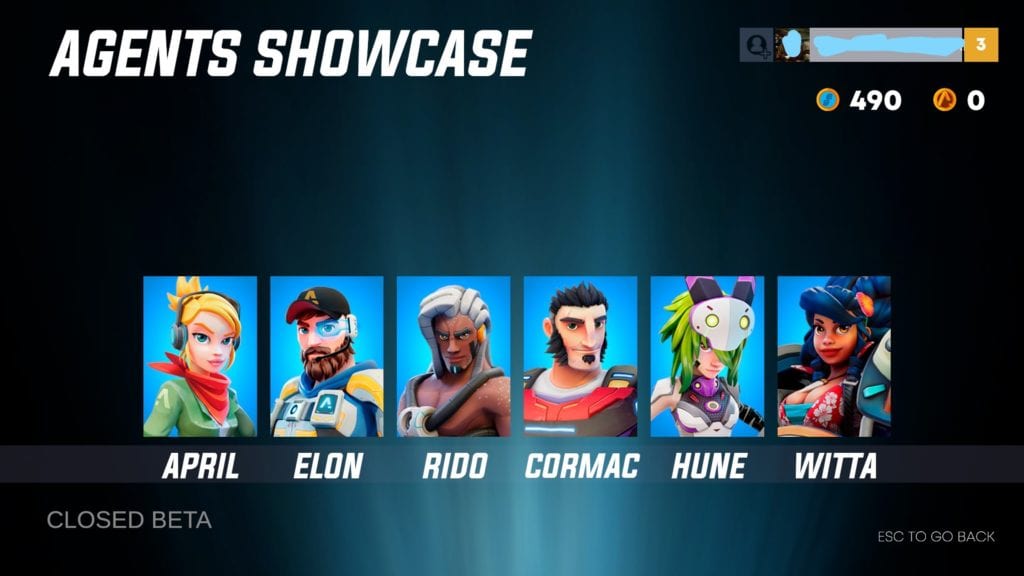 The enemies are problematic too. They do way too much damage. If one of them hits you twice, you’re going to have to respawn. The hit detection on some of their attacks is also very wonky. I only fought a couple of enemies, and they had a tail swipe that would hit me even if I was out of the way. The enemies also don’t react much to being shot, which is awkward. You can furthermore use a very spammable dodge roll to get out of the way of attacks.

And building because why not?

Agents: Biohunters also has four things you can build. When you kill enemies, they drop blue orbs that work as building materials. You can build a new transporter to spawn from, a wall for cover, an automatic turret to keep foes at bay, and some fourth thing that I didn’t get around to building. These can all be helpful but also very expensive. But if you’re successfully taking down a lot of enemies, you’ll have plenty.

Once you enter the arena, the game changes focus substantially, though. Only the team that gets to three points can fight the monster, so I’m not entirely sure what happens to the other team, as I didn’t lose any of my matches. Once inside, you’re directed to attack and destroy the monster’s three weak points. In this case, the monster had three pieces that my teammates and I shot at until they broke. Much like any other times you shoot things in Agents: Biohunters, this too feels poor. 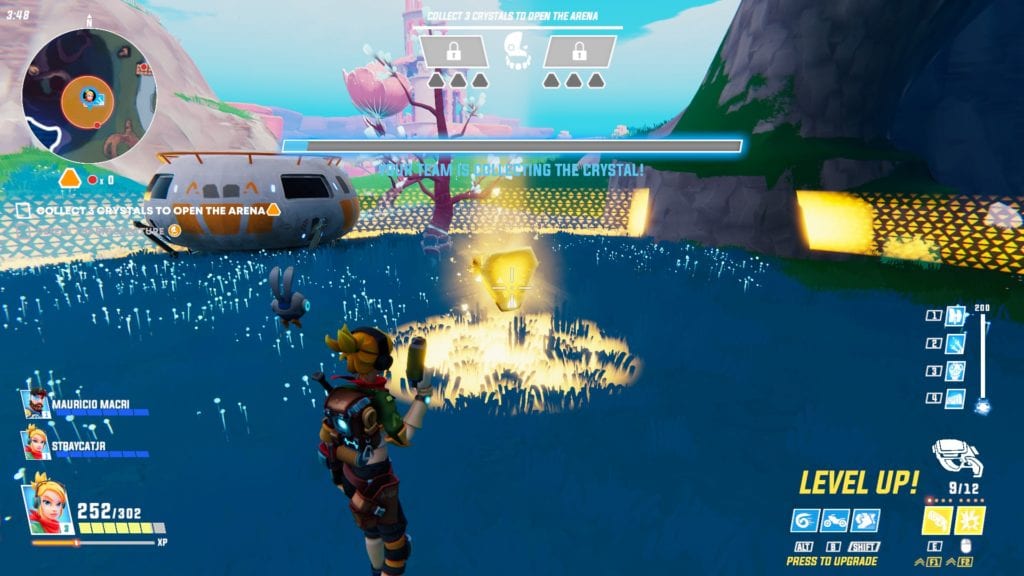 Gotta love standing around waiting for a meter to fill while barely anything attacks you.

Similar to with smaller enemies, the hit detection is off and the damage seems poorly considered. The boss also had an aggravating move where it would suddenly flood the floor with water that would take away half your health if you stood in it. Yes, you get hurt by standing in shallow water. To counteract this, you need to stand on stones. It wasn’t fun at all, and it became even less interesting on subsequent attempts.

The fight against the boss also lacks much threat because you can just respawn until it dies. Once again, I never lost so I don’t know how the other team could end up stealing the kill from you or anything, especially since, to even get into the arena, you have to get three points. So I’d imagine the other team is just straight-up gone when that happens.

Upon being victorious, you get rewarded with currency that can be used to purchase skins and emotes and the like. The skins are mostly just palette swaps though and I didn’t try any of the emotes. 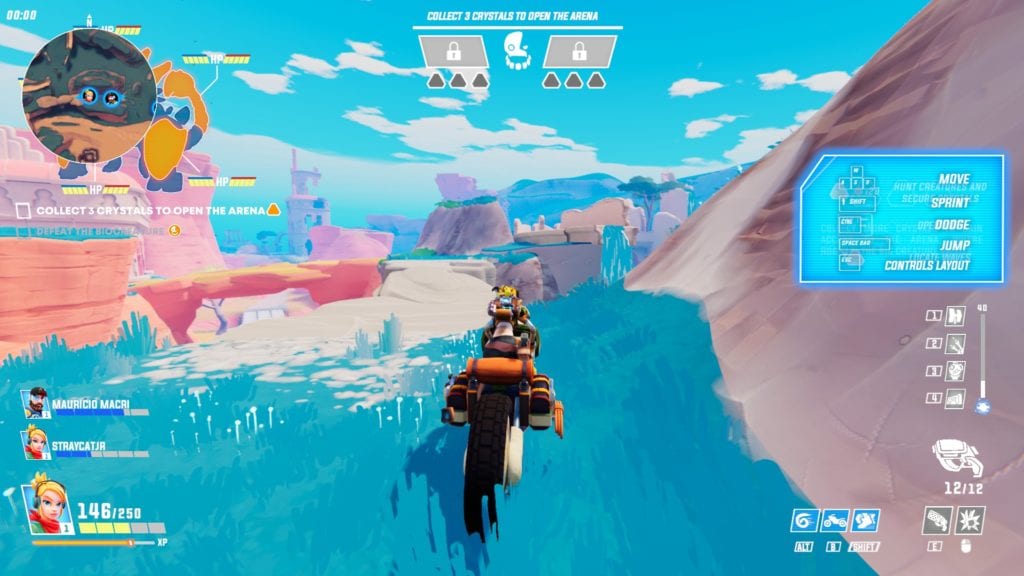 At least motorcycles are usually fun.

As this was a closed beta, there were some bugs and other issues. There was a lot of hitching and some serious lag. You spawn in a little room with a staircase that lacks proper collision detection as well. The biggest issue I had was the time I went into a match and the capture points didn’t spawn at all. There was no way for the match to proceed, which resulted in us just running around the overly large map killing each other ad nauseam.

My biggest problem in Agents: Biohunters isn’t the subpar action, iffy control, or overall sense of mediocrity. It’s that I’m just not sure who this is for or why anyone would find it fun. It just cribs things from other sources and puts them all in a blender. I don’t get why there needs to be a big map if all we do in it is capture points. That works better on smaller maps. I don’t understand why point capturing is a focus when it just isn’t all that compelling with such small teams.

And most importantly, I don’t get why you’d be fighting a monster in a competitive, team vs. team game like this. The idea itself is very slapdash, and the individual elements don’t come together in interesting or enjoyable ways. On top of that, the visuals are so bland and uninspired that it’s hard to muster much excitement to begin with. The world itself is colorful but extremely basic, and the character designs are insanely derivative. They absolutely scream “Overwatch knockoff” in every capacity. Perhaps Agents: Biohunters will come together with more work and extensive testing. But for now, I just don’t see how that’s going to happen with how unfocused and awkward the game currently is.

By Logan Broadley7 hours ago
Previews