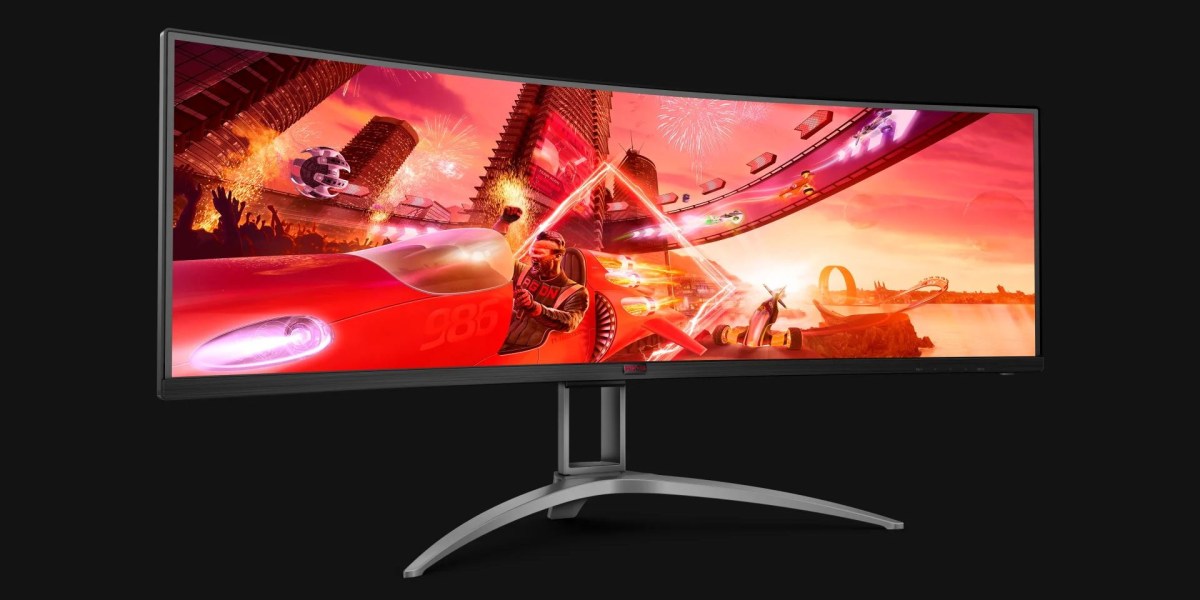 One 0f the latest trends in PC gaming is the emergence of super ultrawide monitors. These are curved screens that often span the width of an entire desk, effectively acting like two 27-inch QHD monitors placed alongside one another. The growing interest shown in these super ultrawide monitors has seen Samsung, LG, and ASUS already enter the market. And now AGON is joining the party. AGON is AOC’s gaming brand, and the folks over there were kind enough to send us an AGON AG493UCX for review.

AOC announced the launch of the AGON gaming brand in 2016, which has been growing rapidly ever since. In a market filled with more recognizable brands, some may feel a little put off by an unfamiliar name. But if my time reviewing the AGON AG493UCX is anything to go by, I wouldn’t be concerned. The build quality is fantastic, with the AG493UCX feeling sturdy and well made. Equally, the AG493UCX comes with an impressive range of utility including three USB 3.2, a USB-C, two HDMI, and two display ports. However, as attractive as it sounds to own such a wide monitor for gaming, the frustrations brought about can outweigh its benefits.

Pushed to the limits

The AGON AG493UCX’s has a resolution of 5120 x 1440p. Although this is relatively standard for a 49″ super ultrawide, it is still far from a common resolution in the grand scheme of things. And it’s a resolution that can cause some issues depending on your PC build. Consider this: a regular 2K monitor outputs 3.7 million pixels, but the AG493UCX outputs exactly double that with 7.4 million. For context, 4K resolutions utilize around 8.3 million pixels. A monitor of this nature requires the extra width to avoid stretched, lower quality images. But it comes at a cost: a substantial performance hit.

Despite only outputting the equivalent of 2K visual fidelity, the increased pixel count means that any 32:9 games you play will be almost as demanding as 4K. Realistically speaking, I’d recommend having at least an Nvidia RTX 2060 Super to get the most out of this monitor. Ideally, an even higher performance card is preferred.

Max settings at 32:9 is beautiful in most modern AAA games, but it can also get demanding. Those without powerful PCs may want to reconsider buying a super ultrawide monitor.

That’s not to say that lower spec graphics cards aren’t an option, but my time reviewing this suggests it will limit the potential of the AGON AG493UCX. Case in point, my RTX 2060 showcased notable inconsistencies when playing Black Ops Cold War on max settings. On a regular 2K monitor, my build can sustain a stable 80-90 frames per second (fps) at max settings. However, at 5120 x 1440, drops to the low 60s were common. During more demanding sequences, there were even occasional framerate drops as low as the 40s. However, when playing on low settings, I was still able to sustain 100+ fps. Personally, I tend to lower my settings as I prioritize framerate above all else. But if you’re someone who values good graphics, make sure your graphics card can handle those extra pixels.

On the bright side, the AGON AG493UCX has a refresh rate of 120Hz. Although this is lower than the standard 144Hz featured in most regular 2K monitors, it is higher than the majority of competing 32:9 super ultrawides. And the difference between 120Hz and 144Hz is negligible. This is a huge plus for those who have strong enough PCs to reach higher framerates at this resolution. Alternatively, you can even use the AG493UCX’s settings to force it into 16:9 and play games as normal at 120Hz if desired. For the majority of competitive games, this is the way to go.

One of the biggest downsides to using a 32:9 super ultrawide monitor is the lack of versatility while gaming. Needless to say, a regular 16:9 monitor is optimized for just about every genre and product on the market. After all, it’s the aspect ratio that the majority of gamers use. In contrast, many titles on the market either don’t support 32:9 at all or feature design decisions that make using such a huge monitor difficult.

Almost every competitive multiplayer game I played during this review was troublesome on the AGON AG493UCX. These kinds of games tend to require quick processing of information in order to outwit your opponent. In a first-person shooter, you have to make snapshot decisions to survive. A real-time strategy game requires you to take in a ton of information and then reapply it as fast as possible. Even something more casual like a sports game is often played at a fast pace, and that can be difficult to keep up with.

More information isn’t always better. Being able to see the full pitch in FIFA may seem like a cool idea but it isn’t fun in practice.

Important user interface elements are often not well placed on such a big screen. Some newer games will have native 32:9 ratio support and allow you to shift the UI closer to the middle. This is important, as just about anything on the far left and right of such a wide monitor is impossible to process quickly. By the time you’ve turned your head to look left or right, you’ve already lost. Furthermore, a good chunk of the games I played did not feature good enough super ultrawide screen support.

Perhaps the worst example of this was Rust. Thanks to its low field of view cap of just 80 degrees, the image is badly stretched towards the far edges of the monitor. There is no aspect ratio option in Rust, so the only alternative is to force the monitor itself into 16:9. Of course, that’s not the AGON AG493UCX’s fault. But it does go to show that optimal support for 32:9 monitors just isn’t there yet even in some of the most popular games. 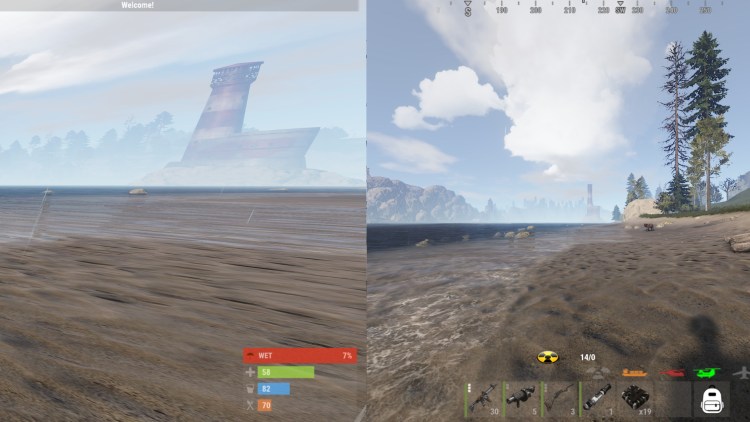 Image stretching is extremely noticeable when playing at 32:9 on a lower field of view. These are two comparisons of a lighthouse on the edge (left) and center (right) of the screen at 80 FOV. Both are taken at an equal distance from the same position.

However, that doesn’t necessarily mean that the AGON AG493UCX offers a worse experience than a regular monitor. It’s just about finding the areas in which it excels. An example of this is just how good it is for racing games. I tested out F1 2020 and was amazed by how immersive the game felt while using the AGON AG493UCX . Having such a large screen curve around you is the closest you can feel to driving a real F1 car. Well, at least without spending years of training required for an FIA Super License.

And racing isn’t the only genre that benefits. Open-world games like Grand Theft Auto can be breathtaking, as you are able to take in large cities or landscapes all at once. And that’s kind of the sad thing. When properly supported, the AGON AG493UCX was a joy to game on. It’s just unfortunate that most games on the market don’t offer the level of support I’d expect.

It’s not all about gaming

Despite the AGON AG493UCX being labeled as a gaming monitor, its functionality for office work shouldn’t be underappreciated. While the ultrawide monitor can hold you back in games that require constant attention and quick thinking, the same does not apply to office work. When given the chance to take your time and space applications out properly, the AGON AG493UCX is a joy to work on.

You can easily have three or four windows open at once with all of them reasonably sized. This is fantastic if you are in a profession that requires a lot of reference material. For example, I recently worked on an interview where I had to have the interview video, Microsoft Word, WordPress, and Google all open at once. On most monitors, this would have led to constant Alt-Tab switching. But on the AGON AG493UCX, a glance left or right does the trick.

The 49″ of screen space provided by the AGON AG493UCX is incredible for day to day work. Being able to get so much information on one screen can help make your work more efficient.

Even though many users probably won’t be doing much that requires four applications open at once, it’s nice to have the option. There’s even a piece of software produced by AOC called AOC Screen +. This lets you split up the monitor into varying segments depending on your preference. This varies from simply splitting the screen in half to a CCTV style surveillance layout. Given that Windows will only recognize it as one big screen by default, this is an okay way of still having access to convenient OS options like Snap Assist.

However, the software itself isn’t great. Perhaps the most frustrating aspect is that it will leave small gaps between applications. If you have a colorful desktop background it’ll bleed through these gaps which isn’t a good look. This forces you to use a darker background just to avoid being distracted. While we’re on the topic of desktop backgrounds, good luck finding one. The 5120 x 1440p resolution is not one that many artists choose to use. Trying to use a lower resolution image will result in both stretching and blurring. Equally, popular software like Wallpaper Engine provides very few options for ultrawide users.

As 32:9 monitors go, the AGON AG493UCX is among the best available on the market. However, that isn’t saying as much as you’d think. Even though they are becoming more common, many developers just don’t implement the necessary support to make gaming on such a wide ratio that enjoyable. The AG493UCX’s 120Hz refresh rate and 1 ms response time make it better for gaming than its direct competitors, but often still worse than the regular alternative.

And at a retail price of $999.99 USD, I suspect most people will have a tough time justifying the purchase. Keep in mind you can get a regular 2K monitor of similar performance, albeit without HDR support, for just $350 USD. In fact, AOC itself offers the CQ27G2 for even less than that. The premium price could be worthwhile in the future if developers begin to better facilitate super ultra-wide monitors. But for the time being the AGON AG493UCX is only suited for enthusiasts and multi-application office work. 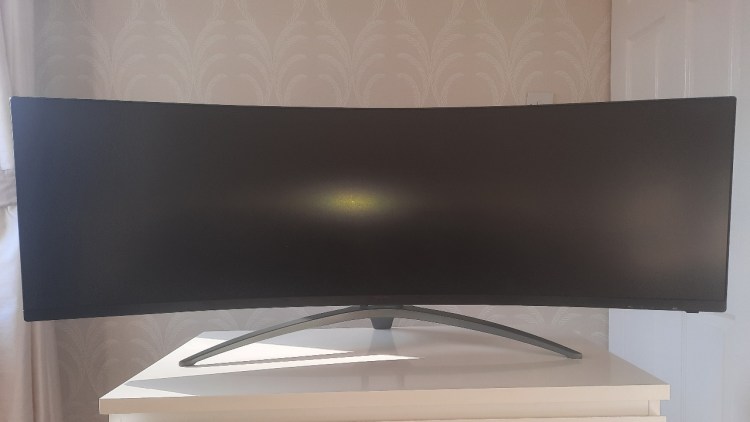 The AGON AG493UCX itself is a well-made, fascinating piece of technology that offers many of the core features gamers will be interested in. Unlike many of its direct competitors, its high refresh rate and low response time make playing competitive games viable. However, the few benefits of having a 32:9 monitor are generally outweighed by the irritations it can cause on a daily basis. Until game developers are willing to integrate better support for the 32:9 aspect ratio, it will never be the optimal way to play most games.