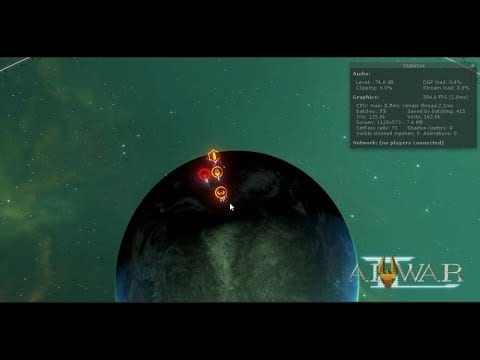 As somebody who spent plenty of time getting mashed to bits by AI fleets in the original AI War, it seems only right to inform the world of a chance to be beaten up all over again in AI War 2. Arcen Games have launched a Kickstarter campaign today, seeking (just under) $300,000 USD to fund a sequel.

As with the original game, AI War 2 will be an asymmetrical RTS title in which the AI plays by its own rules. It can be defeated, but it has near infinite resources, few (if any) supplies you can disrupt, and a severely ruthless streak. The series makes these differences transparent, so while it’s ‘unfair’, it’s that way by design – to challenge and tax the player.

Arcen have laid out a full design document for the game, for those who want to dive really in-depth into the changes planned for the sequel. The highlights, for those shorter on time, are an expanded range of AI mechanics, faction choices (Human, Spire or Zenith), tailoring your fleet’s strengths and weaknesses through a new science system, and battlefields that now encompass solar systems. The studio are also taking this opportunity to greatly improve the game’s usability and UI clarity.

There’s more on the Kickstarter page about improved graphics, modding options, and further emphasis on story in AI War 2.

At the time of writing there are a few ‘early bird’ pledges at the $15 USD mark that will get you the game, but once those are gobbled up it’ll be a $20 USD price point minimum to get a copy at release (estimated around October 2017). Pay a bit more (say, $30 USD) and you’ll be playing the Early Access version of the game too (estimated at May 2017). At $40 USD, you get to peak at AI War 2 even earlier, with a January 2017 (estimated) Alpha version.

Here’s a look at a work-in-progress video from AI War 2.