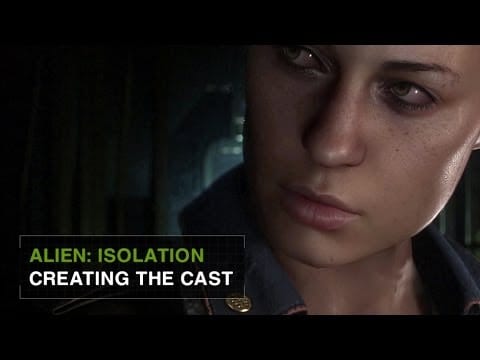 Don’t stare at this too long, it’s quite unsettling.

This ‘Creating the Cast’ trailer for Alien: Isolation is mostly about mo-cap and amusing faces, but does contain a few more details about the game too. Most probably know that the player-character is Ripley’s daughter, who is keen to find out what happened to her mum on the Nostromo.

But what I didn’t quite appreciate (maybe because I haven’t been paying enough attention,) is that she winds up on a space station called Sebastopol which is kind of falling to pieces. As a result, it’s full of rather desperate characters who, while obviously less dangerous than a Xenomorph, could still be rather troublesome. Hopefully Alien: Isolation doesn’t go too heavy on these human enemies; I still wake up in a cold sweat thinking about Aliens: Colonial Marines and how many boring human foes I had to mow down for no particular reason.

It seems as if Creative Assembly is aiming for more specific characters (rather than endless Weyland-Yutani goons,) so that’s encouraging at least. There’s a chap in this trailer who talks about seeing a g-g-g-ghost, but he’s probably just meaning the Xenomorph. Which, to be honest, is much worse than a ghost.

Alien: Isolation is coming on 7 October. You can see the new trailer below. Oddly for a cast trailer, it doesn’t really talk about who the cast actually are.