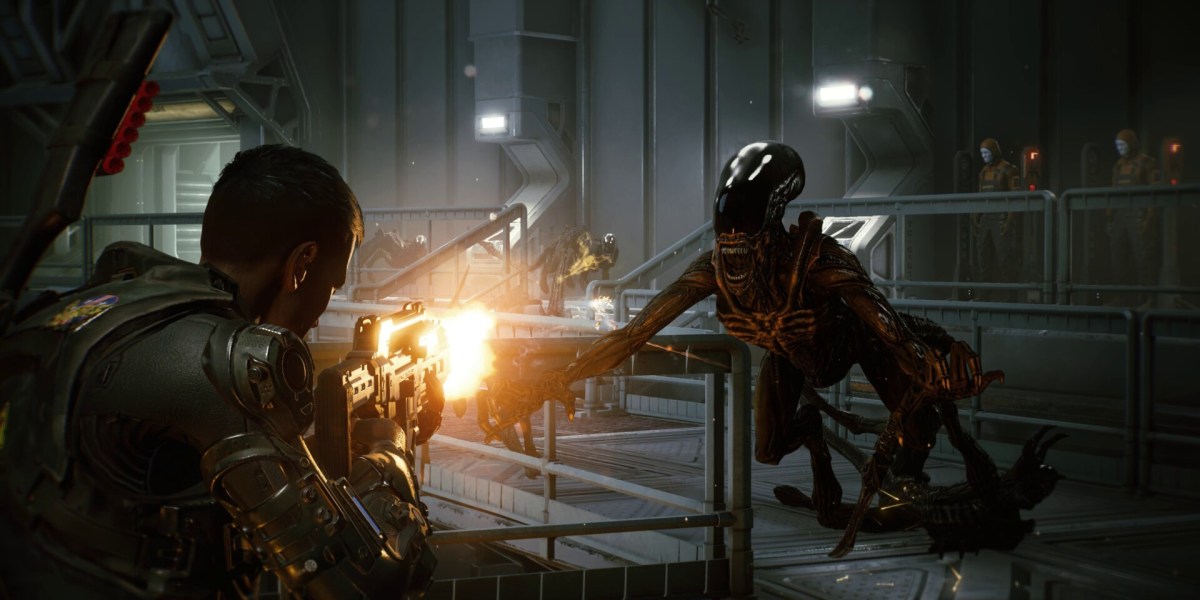 We’re about to be knee-deep in Xenomorphs and there’s no way around it. Aliens: Fireteam Elite is coming out in a month, developed by the fine folks at Cold Iron Studios. I got to interview Cold Iron’s co-founder and CEO, Craig Zinkievich, in regards to Aliens: Fireteam Elite, and he was kind enough to provide detailed answers for my burning questions about Xenomorphs.

If you haven’t read our preview of Aliens: Fireteam Elite, be sure to give it a read and find out what it’s like to fend off against waves of Xenomorphs.

PCI: What was the main design focus when ensuring that creatures as strong as Xenomorphs could be fought in large packs by just a few humans?

Zinkievich: Xenomorphs are strong, but the Colonial Marines in 2202 have been fighting them for a couple of decades and come prepared and equipped with some of the best weapons humanity has to offer. There are a lot of different Xenomorphs in the game (and the universe). Your standard Runner comes from smaller host stock, quadrupeds like dogs, and whatnot. They tend to be smaller and more “direct” in their approach. But when you go up against Warriors, Drones, and Praetorians in Aliens: Fireteam Elite,  it’ll take your whole team to take one down.

PCI: What made you decide on three players as opposed to four for a squad?

Zinkievich: The biggest driving factors were the environments. We wanted to really deliver that authentic Aliens experience of being in tight, dark corridors like in the films. The tight corridors of the Nostromo, the claustrophobic tunnels of a Xenomorph hive. When we tried to get four marines and the number of Xenomorphs that we wanted for the frenetic gameplay we were going for, it just wasn’t fun. Meanwhile, playing with three marines felt awesome.

PCI: What kind of oversight did you have to deal with in regard to making sure everything stuck closely to series lore?

Zinkievich: Everyone at Cold Iron are big fans of the movies, novels, and comics. This game was made by people who were constantly trying to make it feel as authentic as possible while still providing an over-the-top co-op survival experience. When you’re all fans, there can be a lot of self-policing. 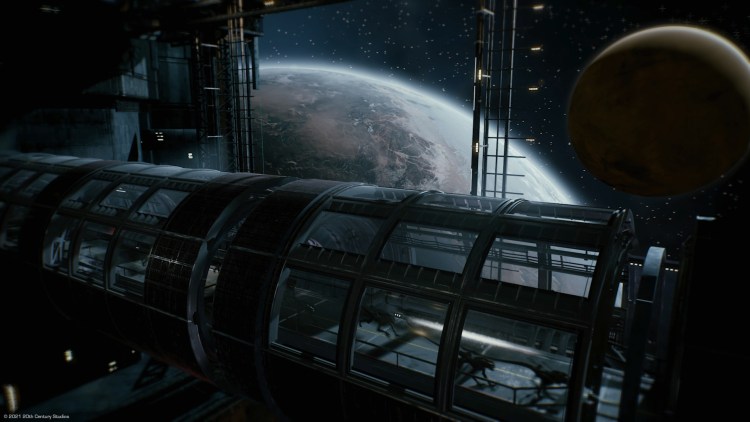 PCI: Did anyone on the team want to make any goofy Xenomorphs with ridiculous abilities?

Zinkievich: For sure. We tried some things that didn’t quite work. When we started there were definitely iconic xenomorphs that we worked to make sure fit in the game. But as we were developing, we often had gameplay-inspired ideas, enemy abilities, and behaviors we wanted to play against. Some of these easily translated into some Xenos, some we implemented and then rejected, not because they weren’t fun, but because the enemy just didn’t fit the franchise.

PCI: How did Cold Iron Studios first get involved with the Alien franchise?

Zinkievich: A couple years after Cold Iron was founded, we were looking for a partner to help get an in-development game we had out the door. 21st Century Fox and the FoxNext team were one of the groups we were talking to. They said they liked our team, our experience, the tech and design worked we’d done – then they asked if we wanted to work on an Aliens title. We were incredibly excited. The studio was bought by 21st Century Fox a few months later.

PCI: What would the team like players to know most about what differentiates Fireteam Elite from similar games?

Zinkievich: We’re huge fans of the co-op survival shooter genre and want to make sure that we’re not only hitting the core elements that gamers expect, but are adding new things as well. It wouldn’t be an authentic Aliens experience if the enemies only ran on the ground and straight at you. Xenomorphs can run on walls and ceilings. They might come at you as a horde, but they’ll spread out and flank you, come through the vents, go back into the vents! We don’t think there’s been a co-op survival shooter with enemies so dynamic.

The team at Cold Iron has a history of working on some deep RPGs. We’re big fans of those games. We wanted to bring more persistence, roleplaying, and advancement mechanics than the standard co-op shooter. In Aliens: Fireteam Elite, you don’t play a set character… you create your own Colonial Marine. The more you play, the more you level them up and become stronger. There are five class kits in the game, the more you use each one, the more your marine becomes proficient and you gain access to perks that you can use to further customize your loadout. Your weapons also level, gaining access to unique weapon-perks, and you can customize your weapon by using different scopes, magazines, muzzles, etc. And that’s not even mentioning the cosmetic customization. There are many ways to level your character and customize how you play the game. 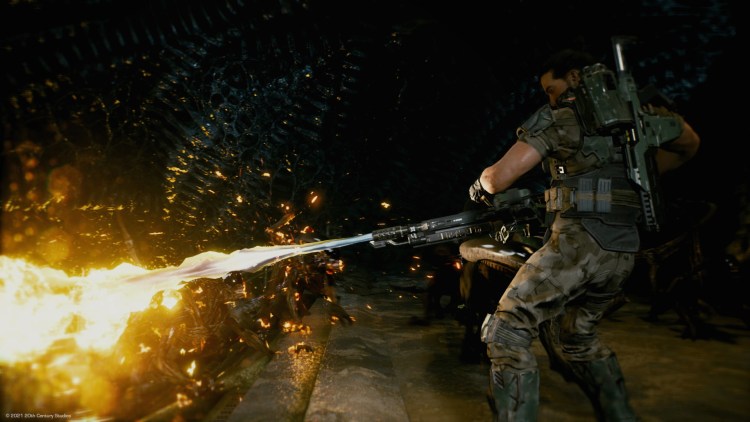 PCI: Similarly, which other games were the largest inspirations for Fireteam Elite?

PCI: What do you hope Fireteam Elite brings to the table that previous games in the franchise didn’t?

Zinkievich: It’s that quintessential Aliens, “with an S,” experience. The marines and crew having fallen back and secured themselves in Hadley’s Hope. The motion detector pings and they realize “…that’s inside the room!”. The moment right after you thought you were an ultimate badass, then you realize the xenomorphs have a different idea.

PCI: Do you expect that the majority of players will replay campaign missions or focus more on horde mode?

Zinkievich: We think it will be a mix. Horde mode is a favorite of many players for good reasons. That being said, the core of the game is the campaign missions. There’s a lot we’ve done to make sure that you can play them over and over and not get tired.

We’ve worked really hard to make sure that there’s variation each time you play through. There’s code, heuristics, and logic paying attention to what you’re doing and making sure you’re getting an optimal experience. There are five different difficulty levels that add things like friendly fire, decreased ammo and aid kits, and increased damage from enemies and acid. Players can painlessly swap between the five different class kits and the dozens of weapons. Play the mission as Gunner, then try it with the Demolisher. Like the Smartgun but want to feel what it’s like to use the flamethrower? Tons of variations there.

Then there’s the Challenge Card system. These are mission mutators that players can play at the beginning of the mission. Some add cosmetic overlays to the screen, some give the players goals (finish the mission in 15min or less), and some mutate the mission a lot. One might introduce your guns randomly jamming throughout the mission. Another might force you to play with only your sidearm. Another might greatly decrease normal damage, but increase weak point damage, forcing you to make headshots to be effective. Completing a mission with one of the dozens of Challenge Cards gets you additional rewards. So lots of replaying there too! 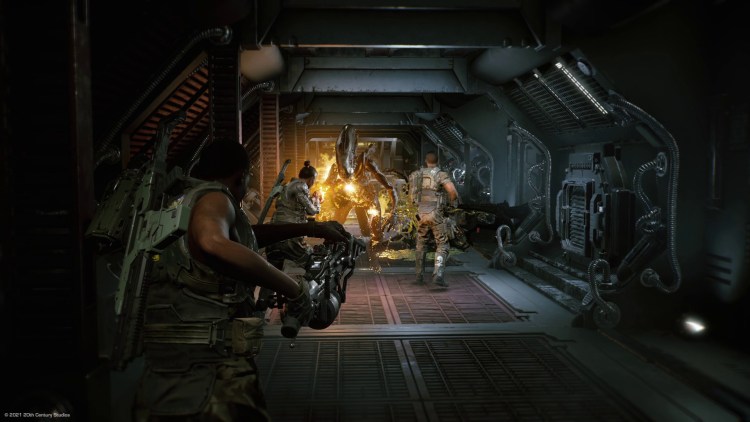 We’d like to thank Craig Zinkievich for his thoughtful answers as we ponder the finer aspects of freaking out about a Xenomorph disappearing into a vent.