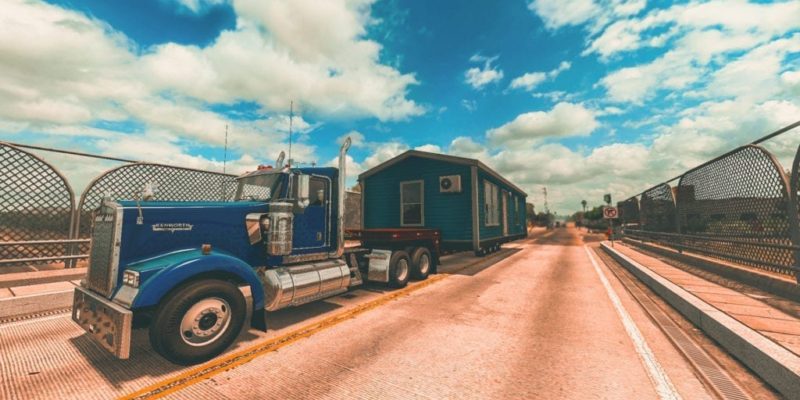 This pack includes 11 new huge cargo hauls. These contain a wide variety of things, such as different parts of a huge dump truck, a helicopter, and even a house. Trucking these big trailers to and fro made me feel like part road-train and part tugboat, as most of the Special Transport trailers are quite long and heavy. A lot of the cargo, like the dump truck chassis and house, are also quite wide, so much so that the edges actually taper off of the trailer.

This makes for an ‘interesting’ driving experience. I never knew how much I hated roadside objects like lamp poles and signs until trying out these deliveries. There were many moments where the cargo would clip another object, which usually resulted in either trailer damage and/or a sudden stop of my truck. Getting out of these situations is not easy at all.

You see, what makes these Special Transports so “special” isn’t just their huge size, but also the hauling process. Throughout your drive, two escort vehicles accompany you at both the front and rear. They’re responsible for guarding the cargo, so they act as a buffer between incoming traffic as well as traffic that’s directly behind you. Constantly sitting between these two vehicles, mixed with the massive size of most of the trailers, really makes driving all the more anxiety-inducing. 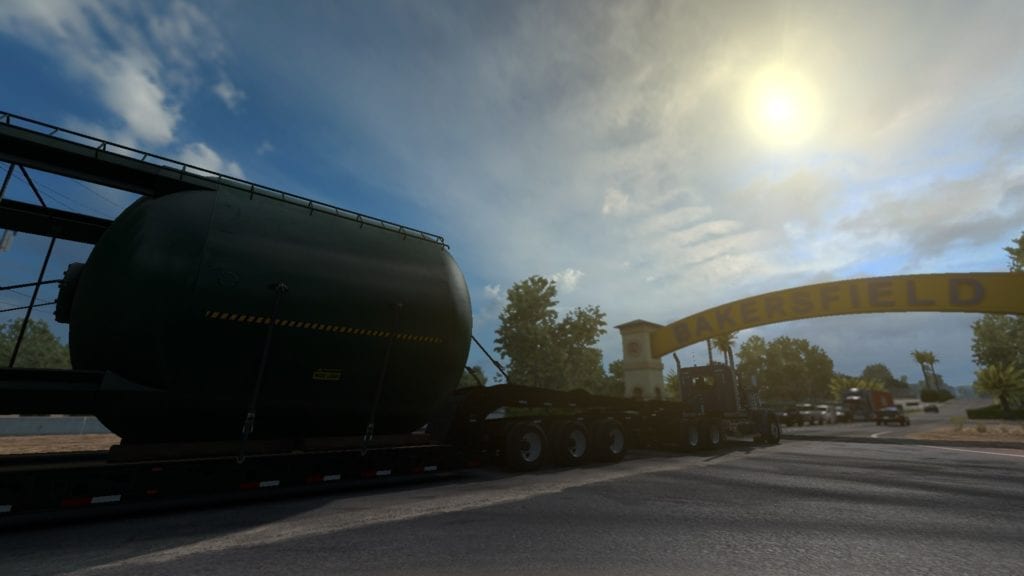 Corners, lampposts, and every other car on the road become your worst enemy when moving these big boys around.

It is a constant balance of speed and maneuvering. Regardless of what cargo you’re carrying, the max speed allowed is 40MPH. Higher speeds would likely result in an accident. But, it also means that journeys take a lot longer, which arguably creates more chances for something to go wrong. Another contradiction is that driving at night is both better and worse; there’s less traffic, but it’s much harder to keep an eye on the cargo trailer. This especially makes the aforementioned tight cornering all the more frustrating.

My best advice for handling these jobs is to try and drive in the daytime whenever possible and also to use the external camera (if you haven’t already), especially when having to make steep turns. I usually drive using the cockpit view, so this took some time. I had forgotten how finicky the game’s camera can be; it tries to keep itself locked on the truck, and thus collides with objects quite frequently.

The massive size of the Special Transport cargo creates a big challenge for the camera, as it’s difficult to see both the truck and trailer properly at the same time. Trying to keep an eye on my rear views was basically impossible. Driving in cockpit view doesn’t really help at all, as the mirrors only end up showing a tiny sliver due to most of the viewpoint being consumed by the massive cargo. True, the camera system wasn’t built with these big objects in mind, but it would be nice if the developers made some adjustments here. 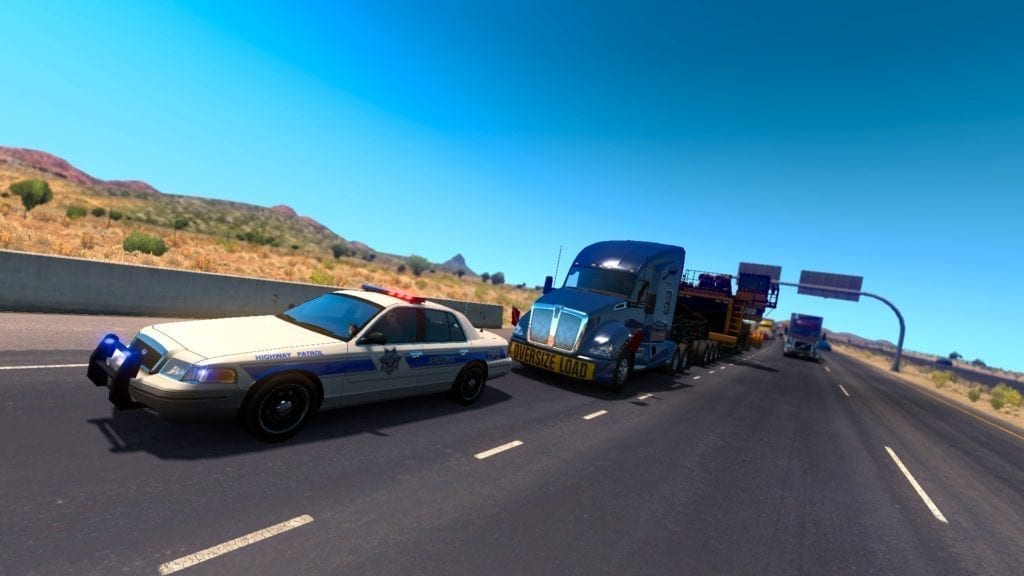 My escort AI didn’t make things that much easier. But, the whole point of this pack is to be challenging.

Another area that needs some adjustments is the aforementioned escort vehicles. Most of the time they perform their task as intended, but there were a lot of moments where stuff went wrong for seemingly no fault of my own. For instance, on one occasion, another AI traffic vehicle merged into the same lane as the leading escort vehicle. The distance was so close that the escort ended up smashing straight into the other car. On another occasion, yet another AI traffic vehicle somehow found itself between my rig and the rear escort. This led to me unexpectedly leaving the rear escort behind. In both these instances, it led to mission failure.

Thankfully, there’s a checkpoint system which activates every few minutes. Still, it’s annoying to have to do a minor restart due to mishaps beyond my control. I never really encountered such issues when playing the ETS 2 version of the Special Transport DLC. My version of ATS isn’t modified either, so I’m not quite sure what was going here. Hopefully, this can be tweaked.

My last gripe with this pack is the way it handles spawn points. You see, these Special Transport contracts only appear in specific cities around the map (17 in all). The delivery routes are pre-planned, and they always end up having you deliver the cargo in cities where the Special Transport jobs don’t spawn. Thus, you either have to drive to another spawn city or use the teleport cheat. This might seem nitpicky, but I really would’ve preferred if these jobs either spawned in every city or, at least, if the delivery routes were between the specific spawn cities. 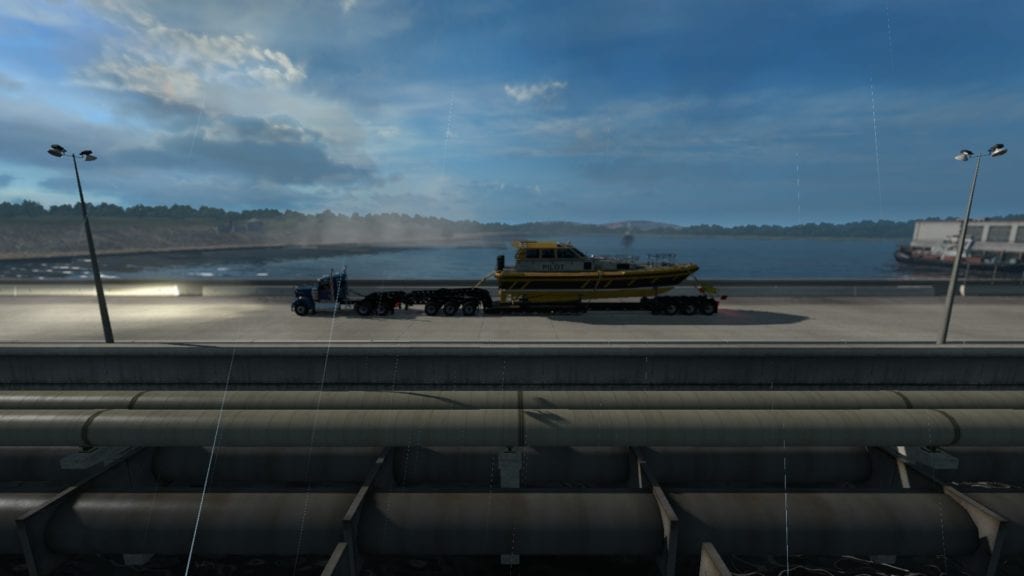 This is definitely different from the usual trucking experience.

Nevertheless, this is still a decent content pack. Despite the glitches I encountered, it was fun hauling such big pieces of cargo around. It definitely provides a different driving experience than what you usually find in American Truck Simulator. It’s worth trying if you’re looking for something to spice the sim up a bit.

The Special Transport DLC for American Truck Simulator provides a different driving experience than usual, but has a few issues that stop it from delivering a totally smooth ride.