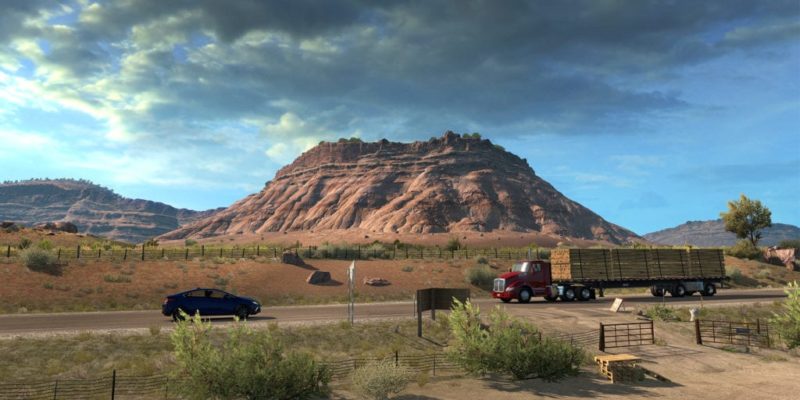 Over the last few weeks, the folks over at SCS Software have been drip-feeding info about the upcoming map expansion to American Truck Simulator: Utah. This upcoming expansion will serve as the fourth state to be added into the game since its original launch. Earlier this year, SCS took players northward into nature with the release of the Oregon and Washington map expansions. Now, things are going to get a little wilder once more as ATS heads westward with Utah.

Another state big on nature (and big in size), Utah’s population isn’t that big at all. But, there are still miles and miles of open road to explore. The developers have excitingly been showing off the beautiful virtual vistas in pre-recorded footage that’s now running over on the DLC’s Steam page, which is live for wish-listing. In fact, SCS is inviting players to start adding the expansion to their Steam wishlists in order to be notified of when it’ll be available for purchase.

As of now, the Steam page is still showing a vague “November 2019” tag as the release date. Well, today is the end of October, so that means the Utah expansion can drop basically any day from this point forward. With the team showing off this much, it’s likely not very far off from release at all.

There’s still no pricing info that’s been released, but considering that both the aforementioned Washington and Oregon expansions both go for $11.99, it’s likely that the Utah expansion will be the same price. Speaking of prices, all content for both American Truck Simulator and its sibling Euro Truck Simulator 2 is currently on sale. So, if you haven’t already, you can pick up a copy of ATS for just $5 right now in order to get prepared for the release of the new map.