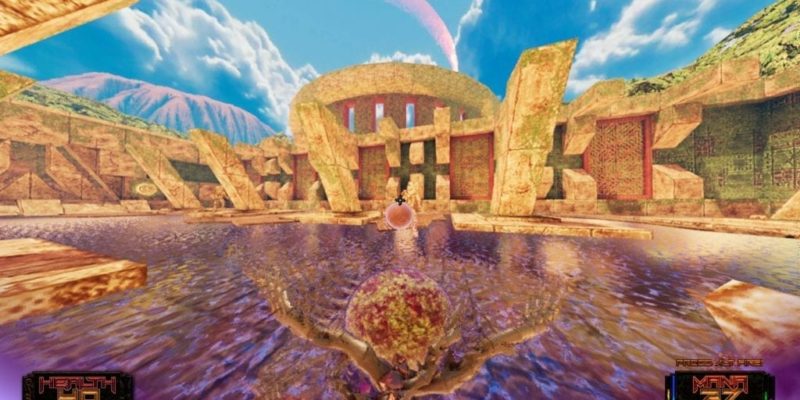 In recent years, we’ve seen a notable increase in developers making games that hearken back to first-person shooters from the ’90s. In an age where most FPS games are multiplayer and single-player campaigns are put on the backburner, a lot of gamers are more than happy to see new games using old-school level structures. Amid Evil attempts this, and it succeeds in a way that one needs to experience to really understand.

On the surface, Amid Evil appears to be an attempt to make a game in the vein of Heretic. You start with nothing but your trusty ax and use a variety of spell-based weapons to fight your way through levels. All the while, your health doesn’t regenerate, so you’ll need to grab pickups. Progression is generally controlled through finding keys of a few colors — so, yes, it’s just like the id Software games of old. But as the game moves along, it becomes clear that this isn’t just a simple retread. This game is a lot more impressive than that.

Amid Evil tells the story of someone chosen to combat great evil. This isn’t important. The game pretty much never tries to convince you that this is important. Honestly, I would have liked a bit more context just because, but it’s fine that there isn’t any. The focus is totally on the gameplay and levels. You can find vague messages written on the walls that allude to lore, but these are always meant to be on the backburner. 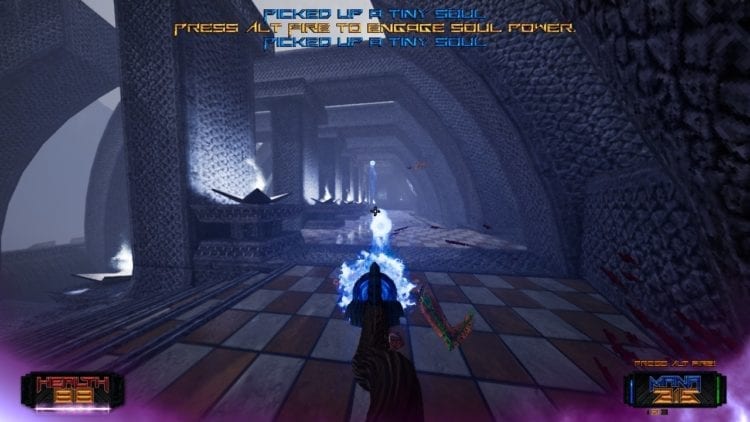 So, structurally, Amid Evil is exactly what I expected, albeit with some twists that seemed curious initially. While most games of this sort have three or four episodes with a handful of levels each, this game has seven. Each of the seven episodes is connected via a hub, a la Quake, and contains three proper levels and a boss battle each. I assumed this meant they would be short. This leads us to some major differences.

On the shoulders of giants

To put it simply, the individual levels in Amid Evil are massive. They’re spread over a huge amount of space, with wide-open areas and enormous structures that shoot up to the sky. The architecture is rather striking, and despite the intentional pixelation of the models and textures, the game is often rather beautiful. Your character absolutely hauls ass when moving, too, so you can cover a ton of ground. As you’d imagine, levels have secrets, and exploring every nook and cranny proves very satisfying.

As for the other major difference, each of the seven episodes is totally disparate. Most games have a theme or something to connect their episodes, but Amid Evil‘s have a ton of variety. The most surprising thing here is that, despite how each episode is really only three levels, every one of them has its own enemies. Visiting the Sacred Path will see you facing rock golems and plant-like creatures as you make your way through stone temples. Stepping into The Forges, meanwhile, will have you on the run from enemies shooting lasers out of their eyes and massive spheres of death that hunt you through the neon-soaked levels. 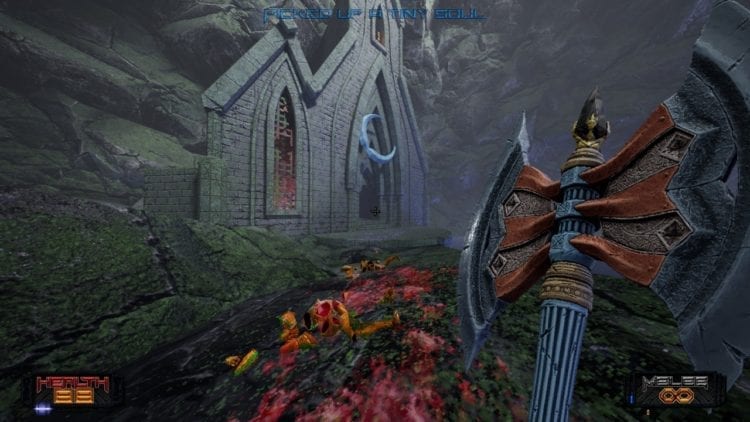 And then, on top of that, each level feels massively different from the others. One level had me slowly making my way up to the top of a massive structure that looked like nothing the game had shown me before. This is even true within episodes. The first level of The Forges is a deeply oppressive, foggy outdoor place that was all about distance, while the second level put me through a treacherous gauntlet and had me dodge traps while struggling to survive. Nothing in Amid Evil feels haphazard or copy-pasted. It’s all unique and crafted with care. And it has a good amount of platforming as well. It’s worth mentioning that, despite the level size, it’s hard to get stuck in the game, as the design is just that good.

The gameplay feels exactly as it should. As I said, movement is extremely fast. You’ll need to be constantly on the move while strafing around the constantly-changing roster of foes the game has in store for you. The shooting is also excellent, with an arsenal of weapons that are almost all effective in different circumstances. The starting ax is risky to use but powerful, but other weapons run off of mana, of which there are four types. Blue and green mana are used for two weapons each. Orange and purple just have one, with purple being the requisite super weapon that you’ll find the least amount of ammo for.

Stages are littered with both ammo and health pickups that you’ll need to use to resupply yourself. And you’ll want to be careful, as each episode strips your inventory and changes up the weapons you get first. For instance, the first weapon you pick up in the game is a rapid-fire staff that shoots blue mana and homes in on enemies. It’s indispensable and, strangely, much more useful than the second blue mana weapon that I don’t care for at all, which quickly fires electric magic. But in one episode, you find this second weapon first. In another, you gain access to the staff last unless you find it in a secret area first. This really keeps you on your toes and forces you to grow familiar with each weapon. 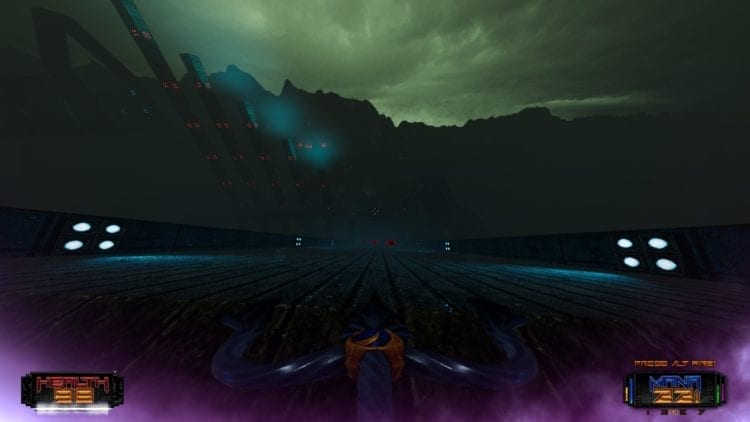 The rest of your arsenal is really kind of kick-ass, too. You’ve got a sword that lets you cut long-range slashes and what appears to be a mace with exploding spines on it. The rocket launcher equivalent literally shoots miniature exploding planets. Each enemy you dispatch drops soul pieces that can fill your soul gauge. Once this is full, you can go into overdrive, which gives all of your weapons different, more powerful attacks. You can store these as much as you want or even set it up to activate automatically in the game’s options.

Early on, Amid Evil is really accessible on the medium difficulty. It has a ton of health, and I didn’t need to rely on save-scumming to stay alive. Over time, though, that changed. Later levels sometimes become extremely skimpy with health, and their enemies can chew through your life in seconds. It isn’t unusual to die in just a few hits, so saving regularly is a must. If you’re not fond of saving a lot, you might want to put it on the lowest difficulty, as the medium setting is no joke.

Each of Amid Evil‘s episodes ends with a boss battle, and some of these are really tough. One boss’s flame sword attack can take you from 100 health to 20 if it touches you once. These battles are usually really awesome, and you’ll typically be circle-strafing and hitting them with everything you’ve got. If the episodes sound short, remember that a level can easily take the better part of an hour if you reload saves a lot.  Just because the levels are comparatively few in number doesn’t mean you’ll just blow past them. 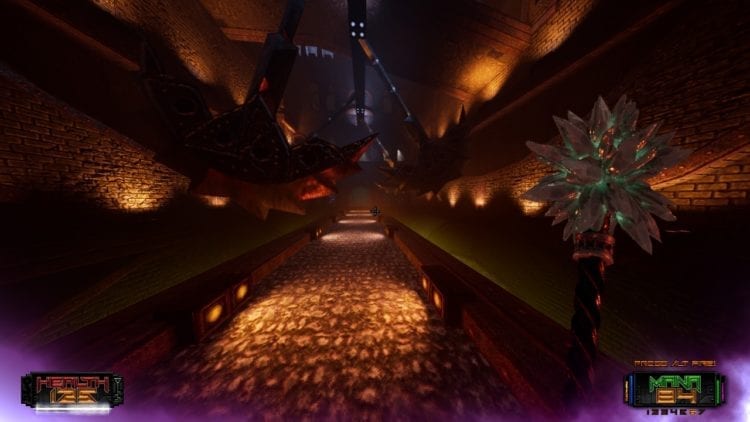 Eye of the beholder

The visuals in Amid Evil are meant to look retro, but at the same time, they’re clearly not from the ’90s. The game visually reminds me of the first Unreal in a lot of ways, just with a lot of modern touches. Regardless of the way the developers tried to rein in the visuals, the game looks decidedly great. It most certainly couldn’t have been pulled off in the decade where its inspirations lie. Everything from the way the enemies blow apart to how distant projectiles light the area is striking to look at.

Amid Evil truly surprised me with its variety and unique details. While aiming to offer an experience along the lines of ’90s classics, it instead betters many of them in a lot of ways. It’s a pretty lengthy experience that can easily take a good chunk of hours per playthrough. There’s also an arena-type mode where you just fight hordes of enemies for people who just want to experience the killer action without exploring. Anyone who enjoys classic-styled FPS games owes it to themselves to play Amid Evil. It’s a wonderful game that stands on its own.

Amid Evil is simultaneously breathtaking and exhilarating in a way that most of its ilk could never hope to be. It's truly an epic adventure filled with impressive sights and dangerous foes.