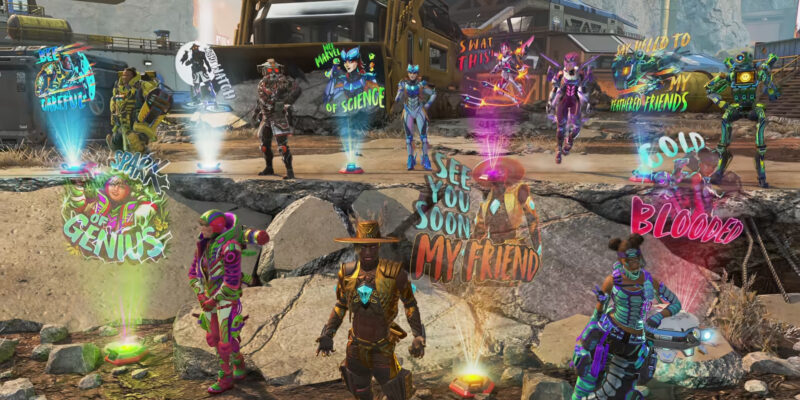 Apex Legends is rolling into Season 10 on August 3, and it’s bringing a lot of fresh content. A new hero, Seer, is dropping into the Apex Games. Rampart has whipped up a new weapon, the Rampage LMG. World’s Edge has gone through some changes courtesy of the extreme elements. And, for the cosmetic lovers out there, Season 10 means a new Apex Legends Battle Pass.

Apex Legends Season 10 is titled Emergence in celebration of Seer joining the roster of Legends. He’s a visionary, artist, and all-around trendsetter. So, it’s only fitting that the trailer for the new Apex Legends Battle Pass adopts the tone of a runway fashion show.

There are three cosmetics in the Emergence Battle Pass that you’ll want to add to your collection. At level 25, you can unlock a Legendary skin for Valkyrie, titled Aerial Evolution. Once you reach level 50, you’ll unlock the Biotic Luminary skin for Horizon. And, wrapping up the show, at level 100, you’ll get the season’s hottest item, the Symbiotic Relationship for the Volt. As always, you can unlock 10 additional levels to get a recolor of the level 100 weapon skin.

While those three skins are going to be the highlights of the season, there are still plenty more notable cosmetics and items to unlock, including Music Packs, Loading Screens, Banners, Gun Charms, Holo Sprays, Quips, and Emotes. You can get a glimpse of some of them in the trailer below.

If you’d like to learn more about Season 10 of Apex Legends, you can check out the dedicated page for Emergence on the game’s website. It will show you all the changes to World’s Edge, detail the new Ranked Season, and plenty more.

You can also learn more about the new Legend Seer by checking out his origin story. It’s appropriately titled Metamorphosis, and shows how the Legend came to be the way he is today.