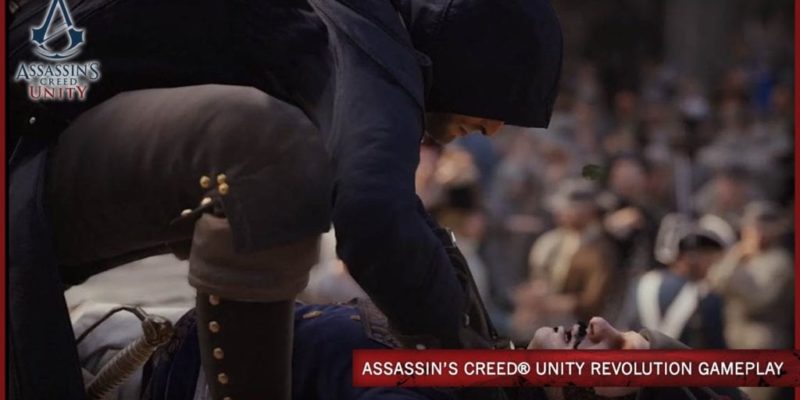 Hey, stop shooting people or I’ll have to stab you.

In a disturbing new development in Ubisoft’s carpet bombing approach to marketing, this Bastille Day sees them release two trailers at once. I hope this isn’t going to be the trend for Assassin’s Creed: Unity. I’m not really looking forward to having to feign enthusiasm for trailer number #320 sometime around September.

For now, I’m still in the “hey, maybe this Assassin’s Creed: Unity really will be a significant step forward for the series mechanics!” honeymoon phase. But that could all change.

So, you’ve got a choice of which trailer to watch on this Bastille Day. The first one features Arno stabbing a lot of people in the neck and explaining that the revolution failed the people because it turned violent and bloody. Just a quick reminder, he’s saying this while stabbing lots of people in the neck. He’s also still very, very British, so when he’s talking about “our people” and referring to France it’s a bit confusing. There’s some lovely architecture on show though.

Lots of eager press quotes about Assassin’s Creed: Unity too, which is odd because it’s not like any of them have played it properly yet. Here’s that trailer.

But wait, here’s another one. This second trailer is more about a brief history of the reasons behind the French revolution (the upper classes were being twats, as usual) and how it all went rather horribly wrong. It did go horribly wrong, but it’s always seemed a bit unfair that a year of bourgeois bloodshed gets dubbed a REIGN OF TERROR, while decades of oppression and abuse from the French aristocracy is, what, just the status quo? They both seem pretty reign of terror-ish to me.

Your short history lesson begins, below.

Assassin’s Creed: Unity is due on 28 October.

Arma 3 update takes you back to Bootcamp

Areal AMA at Reddit does little to reassure S.T.A.L.K.E.R. fans

By Steve Clist39 mins ago
Features