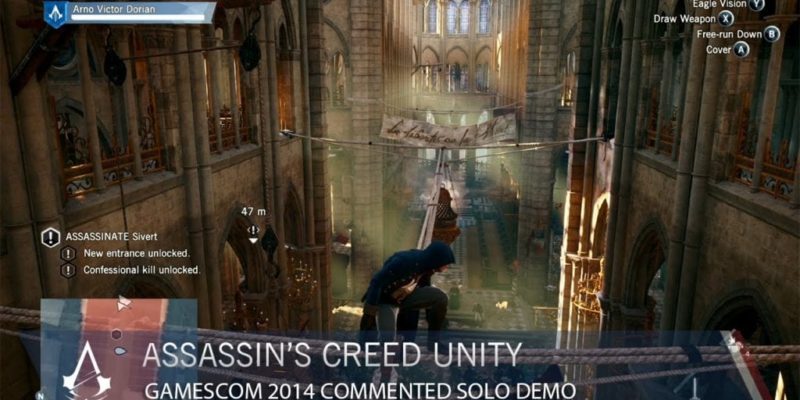 Ubisoft has released a 10 minute narrated trailer for Assassin’s Creed: Unity, demonstrating the freeform nature of their new mission structures. They’re calling them ‘black box’ missions, because everything in gaming has to have a weird code-name I guess.

The important part is that assassination missions of this type will pretty much supply Arno with a target (in this case a Templar fellow called Sivert) and leave it up to the player how they go about performing the task. In the mission shown, there are some pretty hefty clues given in the preceding cut-scene (“oh no, this random mob has stolen the keys to Notre Dame!”) but as it appears to be the first time Arno is approaching this sort of thing that could just be tutorial overtones.

As the player explores the leads and moves around, Assassin’s Creed: Unity opens up ‘mod missions’ (that’s another pointless name, they’re just sub-sections of the main mission which may alter your approach or how the scenario plays out.) In the trailer below, you’ll see Arno using stealth mode to optionally tail an important figure for information and pass up the chance to lock-pick a door, as he doesn’t have the lock picking skill yet.

The narration notes that there are around ten different ways to get inside Notre Dame, which sounds quite promising.

Assassin’s Creed: Unity will be released on PC in October.

Galactic Civilizations 3 beta beams onto Steam at a lower price