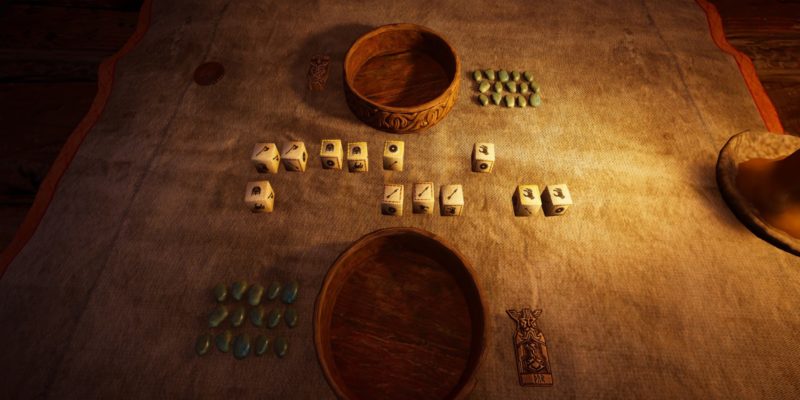 Orlog is a minigame where players use dice and even a bit of “magic” called God Favors. Whenever you win against a new opponent, you’ll get their God Favor to add to your collection. It’s a bit like The Witcher III‘s Gwent and Final Fantasy VIII‘s Triple Triad. Anyway, here’s our guide to help you out.

When you spot an NPC that wants to play Orlog (denoted by a dice icon), you’ll begin the minigame. Choose whether to roll heads or tails to see who starts first (which, normally, won’t matter).

Now, both players have 15 HP (symbolized by the small stones at the edge of the table). 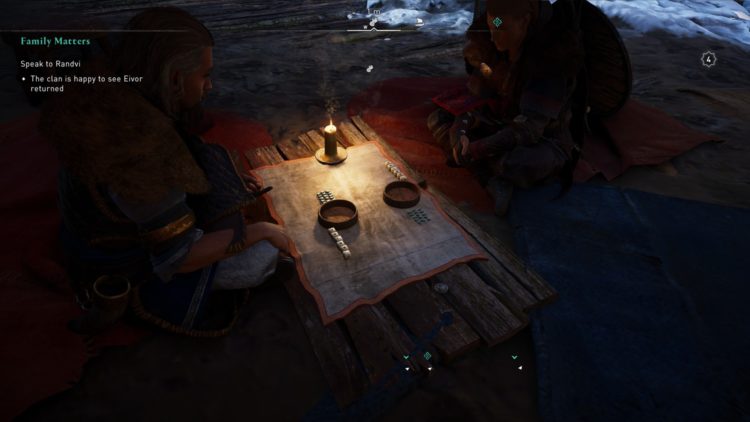 Next, take a look at the die faces and see their counters (i.e., axe/melee damage vs. helmet/block melee damage). So, for each offensive die that you roll, your opponent has to have an equal number of the corresponding defensive die to negate that damage.

The exceptions here are the orange-bordered die and the hand icon. Every die with an orange border gives you a token that can be used later for God Favors. Meanwhile, the hand icon steals your rival’s tokens instead.

Note: The orange-bordered dice can have any symbol. For instance, a hand die with an orange border not only gives you one token, but it steals another from your opponent. 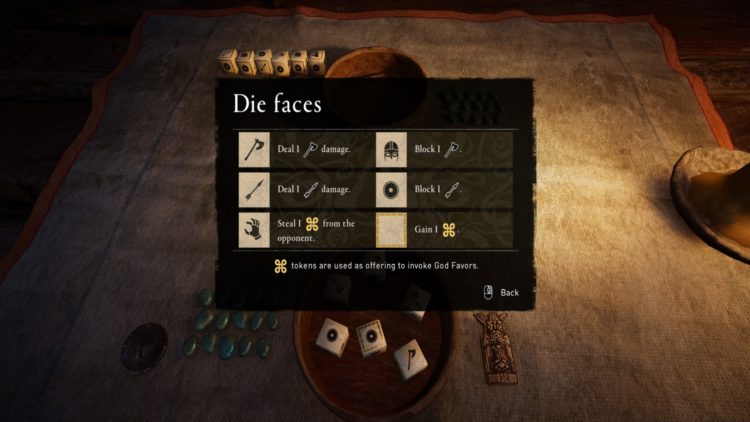 Anyway, players take turns rolling three times. Each time they roll, they can select zero to six die that will be active. As such, it becomes a choice of playing several dice each turn, or waiting much later in case you get better rolls.

After all three rolling phases are done, players may select a God Favor (more on these in a while). Then, the resolution phase occurs. 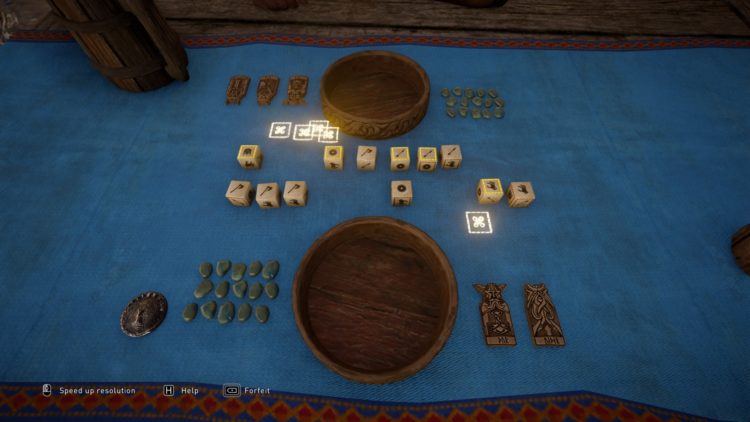 When this happens, all dice with orange borders get converted into tokens. Next, all your selected dice are matched against your opponent’s and damage from axe or arrow attacks is dealt (or nullified). Likewise, if there are existing hands, they’ll steal the tokens from the other side and add it to yours.

The Orlog game continues and the process is repeated until a player has lost all their HP stones. 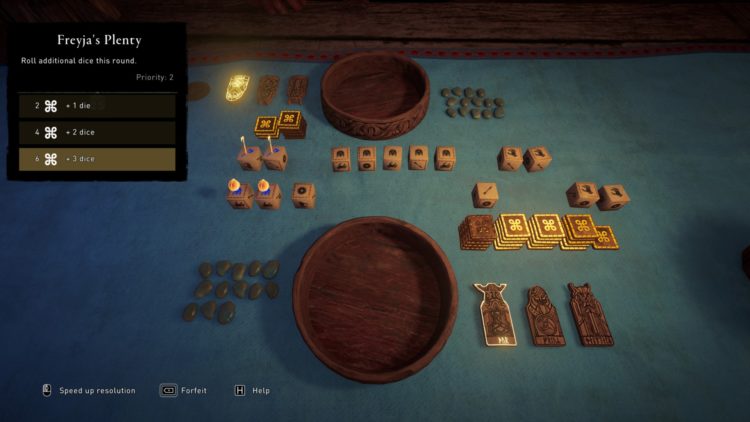 The God Favors mechanic is what makes Orlog truly an interesting minigame in Assassin’s Creed Valhalla. You select up to three of these before a bout starts.

Later, with enough tokens, you can cast spells that can turn the tide of your match. However, keep in mind that if your rival’s “hands” manage to steal them, then your selection could fail that round assuming the effect only occurs after the resolution phase (i.e., Thor’s Strike). 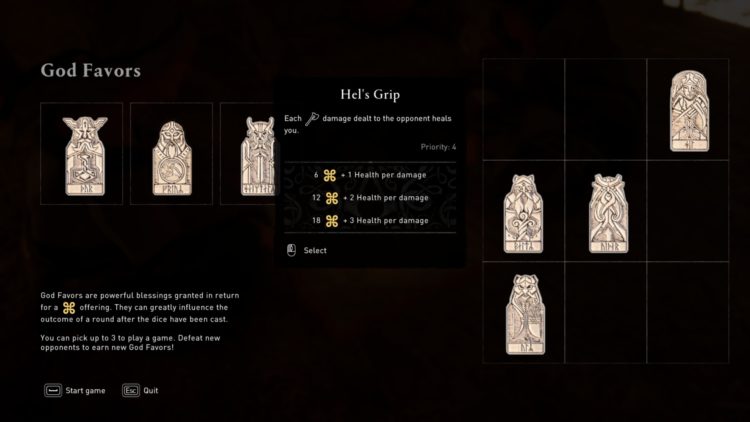 Should you defeat another player, you’ll obtain the God Favor that they have. See, I told you it was like Gwent and Triple Triad.

Anyway, here are some examples of God Favors: 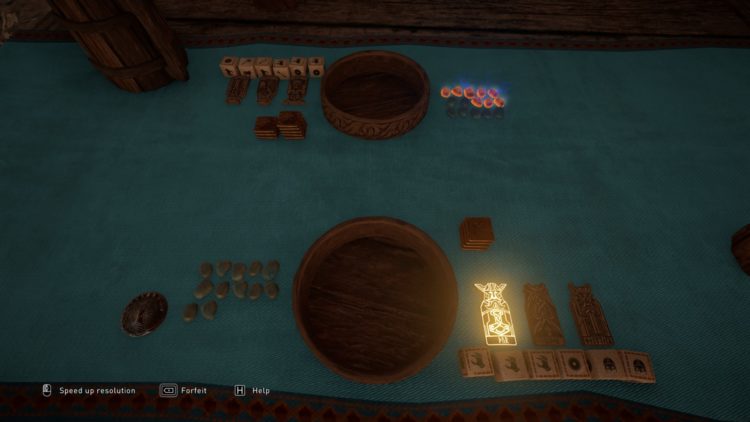 That might sound counter-intuitive until you realize that your opponent has a similar mindset: just pick the dice that have orange borders to gain more tokens. Maybe pick some “hands” too so you steal and amass tokens until you’re ready to pounce.

My usual strategy involves gaining over a dozen tokens and then blasting the other player with Thor’s Strike. That’s when I pick axes or arrows to drop their HP. Just pray that they don’t use God Favors that can heal them.

Later, once you acquire Freyr’s Gift, use this in conjunction with selecting several hands to steal more tokens from your opponent. Alternatively, use it when a majority of your dice are axes or arrows for that extra damage. 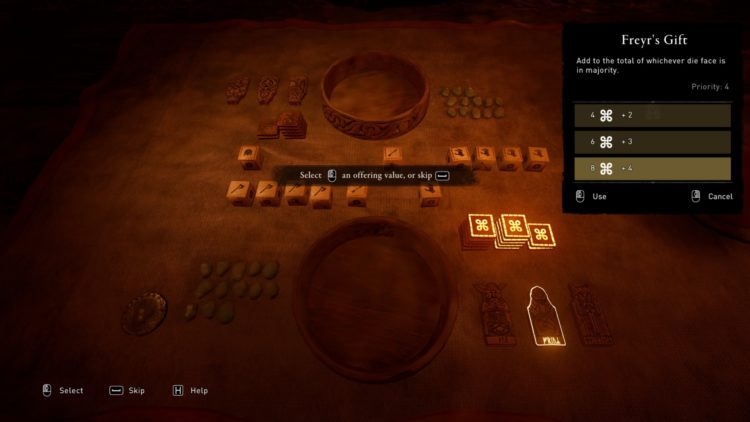 Farming Simulator 19 Alpine Expansion – Is it worth it?