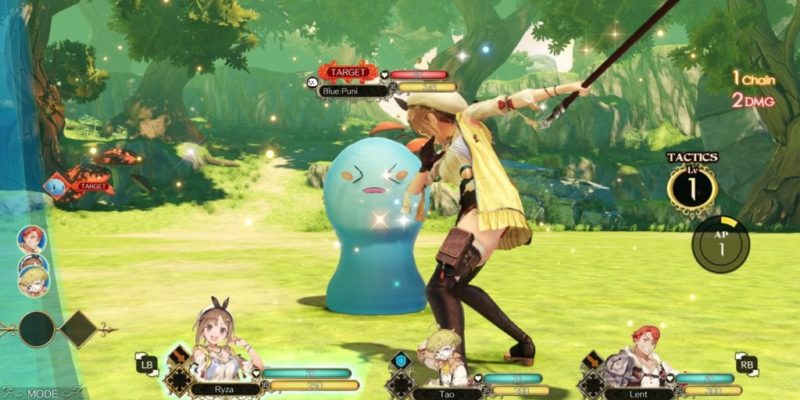 There are a hell of a lot of Atelier games. For anyone not already invested, it may seem like there are too many. It certainly doesn’t help that a new one releases every year – or, in the case of this year, two. Atelier Ryza had a year-long development cycle alongside Atelier Lulua, and I expected to find myself at least somewhat underwhelmed. Instead, I got one of the best crafting-based games I’ve ever played.

Atelier Ryza seems insanely typical at first blush, and in many ways, it is. It features a cast of fairly cookie-cutter anime archetypes as they traipse around generic fantasy locales in a slice-of-life fashion. Naturally, things aren’t as simple as they seem, and our heroes are faced with a great threat that threatens to change the world as they know it. Y’know, typical JRPG stuff.

Early on, I was far from impressed with the plot or the characters. They seemed insanely basic and thin. But given time, the characters revealed some layers and the plot developed in ways I didn’t expect. Minor details gave way to major twists. Seemingly mundane character interactions hinted at something deeper that eventually led to a lot of fairly-believable character development. 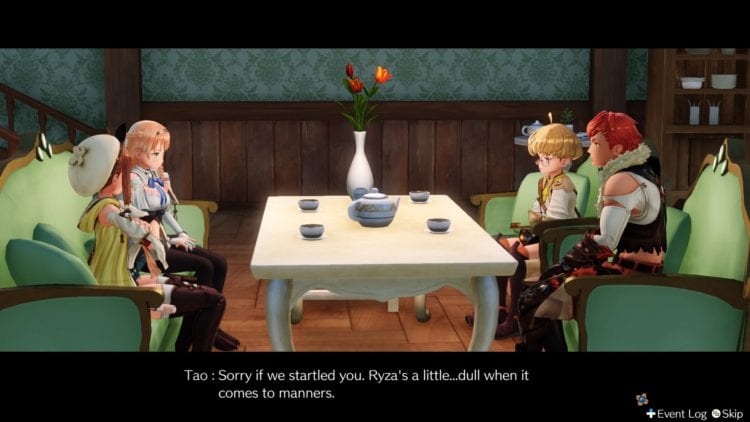 No character exemplifies Atelier Ryza‘s surprisingly adept narrative growth as much as Ryza herself. Most Atelier protagonists are basically cutesy princess-types in frilly dresses. Ryza, however, is shiftless, oftentimes disrespectful, and can be downright selfish. But she’s also kind, understanding, and patient, not to mention tough and not lacking a backbone. She’s still fairly familiar in most respects, but there’s a certain level of thoughtfulness to her and the other characters’ arcs. There are a whole lot of story sequences, too, so the game would have been a pain to get through if this wasn’t the case.

Atelier Ryza is, at its core, a game about crafting. Navigation takes place in a fairly large, interconnected world set on both the island that the characters call home and the mainland that those in control forbid them for journeying to. The game isn’t quite open-world, but every exit leads somewhere else. There are also new pieces of equipment that Ryza can use to reach new areas. These areas are neither too big or too small. However, they can often feel like they’re lacking in unique gathering points.

And, oh man, is there a lot of gathering. Atelier Ryza‘s game world is absolutely covered in things to pick up. Plants, trees, mushrooms, ore, water, and other materials are everywhere. And Ryza has a storage unit that can hold thousands of things. Plus, she can carry a certain amount of items on her person, which can be greatly increased by synthesizing a knapsack with varying capacities. 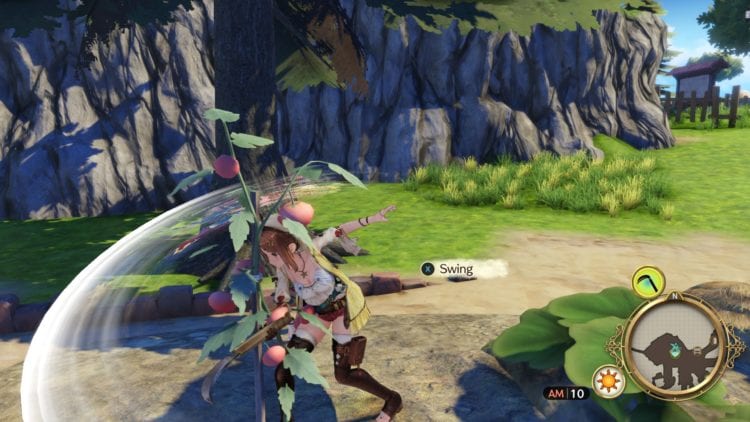 One really neat feature is that Ryza can make herself new gathering equipment that allows her to yield different resources from single gathering points. For instance, you can get berries out of a bush by hitting it with your staff, or you can grab leaves with a scythe. If you want plant matter, you can just smash the bush with a hammer. This really made the gathering process feel more nuanced and interactive, as opposed to just walking up to things and pressing a button.

Atelier Ryza could have taken forever to play through due to how frequently you go back and forth between locations. Instead, the game wastes no time in giving you an extremely useful fast travel feature that lets you get around the initial island fairly quickly. Not long after, you receive the ability to freely travel to any of the game’s areas whenever you want. When you leave an area, all the harvesting points respawn too, so it takes no time at all to get what you need as long as you know where it is.

The navigation is really good here, with green waypoints on the minimap showing you where to go at all times. There’s also a story summary accessed via the start button that just straight-up tells you what to do. Suffice to say, Atelier Ryza isn’t interested in wasting your time. Still, you might end up spending more than you expected on synthesizing new items. 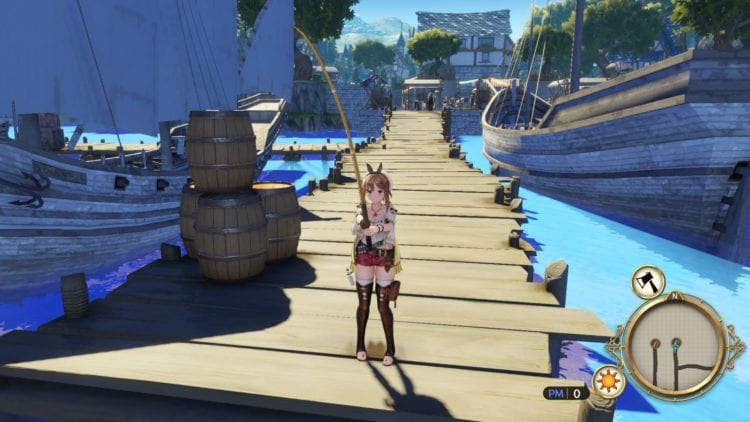 Item creation in this game is hands-down the most fun I think I’ve ever had crafting before. It’s simple enough that you can just blunder through it, but you can make considerably better items if you know what you’re doing. Synthesizing items is focused on a node system, much like a skill tree in most RPGs. Each ingredient has a quality number and a number indicating how many nodes its element will fill, and you use this to add new traits and qualities to the items you make. I won’t get any further into it here, for obvious reasons.

Down the rabbit hole

Items also have recipes for other items they can unlock by following certain nodes. This is generally how Ryza unlocks new items, and it’s easy to just spend a ton of time crafting new items and improving ones you already have. Atelier Ryza doles out new workshop upgrades regularly, and these change up the way you handle items. You get the ability to duplicate items, you can use other items to strengthen weapons, you can even create an entire little world that grows the ingredients you’re looking for. There’s so much to it.

And then there’s the combat. Atelier Ryza isn’t a typical turn-based RPG like previous games in the series. Instead, it’s more akin to Final Fantasy XIII-2. Based on your character’s speed, their portrait moves down until it hits a circle that allows them to act. This occurs in real-time and doesn’t pause unless you use up some ability points for a quick action. Ability points build up with each hit your character lands and can be used to go to the next level of points. This increases the amount of times your characters attack and how strong their skills are. 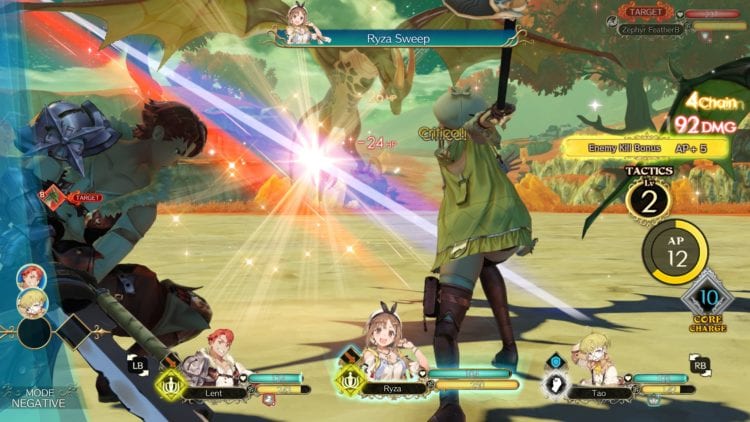 You can also bring items with you into combat that you can’t use up. These cost core points, which you can refill by temporarily sacrificing a single item. It works really well. I prefer this style of combat to the previous one. It might not work as well at times, but I’m so sick of turn-based fights that I definitely found fighting more interesting than I would have otherwise. Unfortunately, enemy variety is very low. You’ll mostly be fighting palette swaps of the same five enemies endlessly, but leveling up isn’t that useful anyway, so you can generally avoid combat whenever you want.

That said, some boss battles see significant difficulty spikes. These aren’t really a big deal and won’t typically take more than a few tries, but they are surprising, as the combat is often meant to be really easy. At any rate, if you’re having trouble, grinding won’t help you. Instead, you’ll want to get better gear, but this too can prove problematic.

For a very large stretch of the game, I didn’t make new weapons or armor at all. Not because I didn’t want to, but because making the next tier required me to find two very specific items that I couldn’t locate. One of these only exists in a single location in the game and requires gear that needs some other hard-to-find items in order for you to make it. I do like that the game doesn’t totally hold your hand as much as it could have, but it was really annoying not knowing where, or even if, I could get those items. 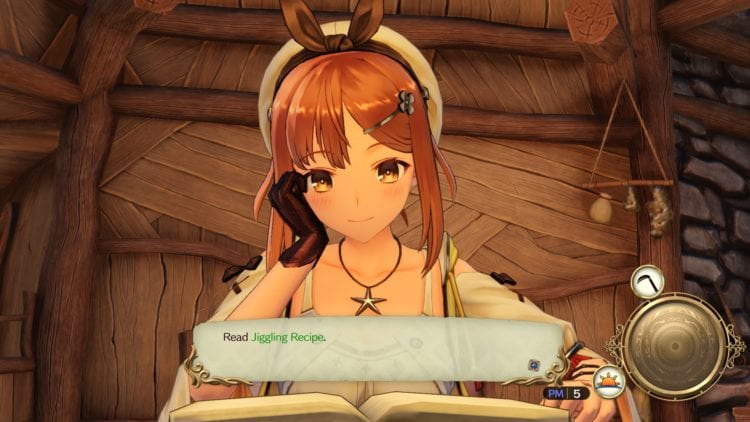 I didn’t actually find what I needed until right before the very last part of the game. Naturally, I had a ton of catching up to do and spent at least a couple of hours synthesizing all of the items I missed and working to give my characters better gear.

Atelier Ryza has six characters, and thankfully, you can equip all armor and accessories to any of them. If you want to switch characters out, you just need to swap their gear and you’re ready to go. They all also level up together, so you’ll never need to grind to catch them up. The game has three front-line characters and three support characters. You can have two frontlines and only one support in your party at once, though, which kind of limits you. Still, I didn’t mind that too much.

What does get old is how almost every story sequence simply requires you to fast travel to a place, watch a cutscene, and then fast travel to another place for another cutscene. Sometimes you’re forced to spend a few days waiting, which is weird since the game has no time limit whatsoever.

So much to see

Atelier Ryza is a fairly large game, too. With the main story, sidequests, treasure hunting, and experimental synthesizing, the game took me over 40 hours to get through. The side quests are mostly fetch-questy, but they’re all tied to side characters with interesting stories that connect in surprising ways. They’re totally worth doing. One of the last sidequests did bug out on me, though, so I didn’t get to finish them all.

The game looks very dated, but anyone familiar with the series is already okay with that. The areas are fairly large and colorful, but the character models, textures, and animations are very last-generation. Story sequences are also completely stitched together with static animations, but due to the huge amount of them, I can’t see how anything else would have worked. Still, the game is visually pleasing enough that it isn’t too detrimental. 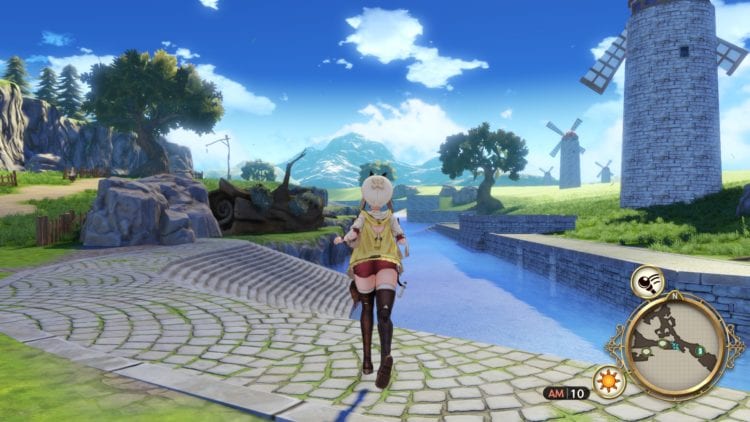 This port left me wanting, though. The only graphical option is for resolution settings. There’s literally nothing else. And despite how last-gen the visuals are, the specs are more demanding than I thought they’d be. I was able to comfortably run the game at about 30-45 FPS on my weak rig. But there were a lot of times where the framerate dropped to 15 for no reason, even on the menu. This always corrected itself after a minute or two, but it was routine enough to annoy me greatly.

Despite how hard some of the ingredients can be to find and how poor the port can be, I really love Atelier Ryza. It’s a lengthy, extremely fun game with wonderful crafting, satisfying combat, good exploration, and a likable – if still somewhat generic – cast of characters. I was really surprised by how much I enjoyed this game. This could very well get the series some new fans, as it’s a very good time and a great place for newcomers to start.

Atelier Ryza is a great game slightly marred by a poor port, lack of enemy variety, and hard-to-find ingredients. But anyone who likes crafting games absolutely owes it to themselves to play this, as it's a huge amount of fun.