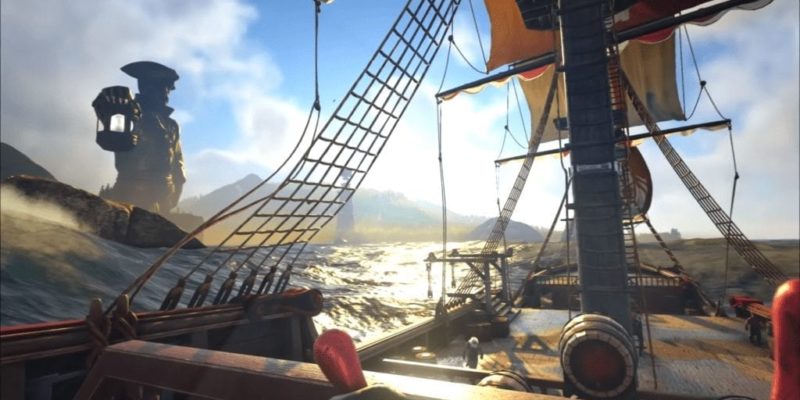 Something interesting happened with the pirate-themed MMO Atlas earlier today. No, the game didn’t suddenly become actually playable (snark, snark). According to the developer, an Atlas admin account was compromised. The player, wielding the godlike power like a cudgel, began dropping tanks and planes from the sky in an official server. Oh, and there were also some whales.

Users on the Atlas subreddit were quick to post some rather insane clips of said flying whales. While something like that would be par for the course in a game like Skies of Arcadia, it’s a bit of a cause for concern in Atlas. A clip taken from Twitch streamer BurkeBlack shows whales flopping into the ocean all around his ship (language warning). He also had a close encounter with a World War II airplane, which flew in from seemingly nowhere. There are plenty of other clips at the subreddit, and they’re all bizarre. Naturally, quite a few people at the subreddit are a little confused.

Tanks, Planes, And Whales, Oh My

“Earlier today, an admin’s steam account was compromised and used to cause some devastation on our Official NA PvP Network,” wrote Grapeshot Games at its community forum. “To be clear this was not caused by a hack, third party program, or exploit. We have taken the appropriate steps to ensure this does not happen again. We’ll be rolling back our Official NA PvP Network by approximately 5 and a half hours to a network world save at approximately 11 AM UTC (3 AM PST/6 AM EST). We apologize for the inconvenience and we thank for your patience and understanding during this time.”

Many on the subreddit are pointing the blame at a known group of apparent hackers and cheaters. Going by Black Butterfly, the band appears to have been a major thorn in players’ sides for a time. Users are calling for the ban of the entire group.

Supposedly, the proof lies in the first clip from BurkeBlack, who approached a Black Butterfly vessel before whales suddenly assaulted them. During the event, one of the Black Butterfly members innocently asked in the in-game chat, “uhh you guys hacking.” As far as hacker subterfuge goes, that line is a classic. Still, it’s up to Grapeshot to investigate and take any action, if there is any action to take.

Sea Of Thieves Install Size Drops By Half In Next Update