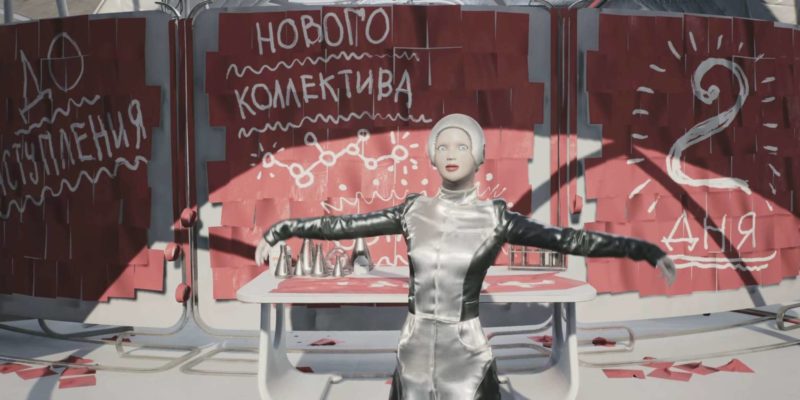 Developer Mundfish published a new trailer for Atomic Heart, and as usual, it is a visual parade of over-the-top soviet eccentricity. Certainly, it’s been quite a while since the Russian developer released a trailer for the game. After a year without any trailer, Mundfish has finally revealed another sneak peek of what players can expect. The short trailer sports 4K quality and does a great job at capturing Atomic Heart‘s surreal Soviet-inspired scenery. This time, Mundfish showcased brief gameplay segments for both melee and firearm weapons. As well, some never-before-seen enemies were thrown into the mix.

It’s hard to determine what’s going on in the trailer. For starters, as “The Blue Danube” plays in the background, a flying drill worm crosses the sky. Following that bizarre imagery, there are brief cutscenes of what seems to be an underground facility. Additionally, there appears to be some sort of greenhouse that’s oozing with a gravity-defying transparent fluid. The teaser ends bombastically with the reveal of a massive tree-like enemy at the very end. Every scene depicts a futuristic, yet ’30s Soviet era-inspired aesthetic. Furthermore, the brief combat scenes show great animations and plenty of particle effects.

Surely, there’s very little sense in all of this. But it can’t be denied that Atomic Heart does have its ways when it comes to visuals. The grayscale palette mixed with the abundance of reflective structures bodes well with the theme of a Soviet alternate reality. As well, all the reflective surfaces and metal could end up especially beautiful with the RTX support the game will have on PC.

Stunning graphics aside, there is very little information for the underlying plot. So far, we know that the game’s protagonist is a KGB special agent with the code name P-3. Mainly, the objective of the game is to investigate a manufacturing facility run by the government that has mysteriously fallen silent. The animations and visuals here are undoubtedly exciting. Hopefully, the story will be able to unify all that and deliver the game we are all expecting.

Speaking of wild trailers, if you’re a horror fan you might want to take a look at Frictional Games’ teaser trailer for an upcoming game. It surely doesn’t disappoint in the creepy department.

Romance of the Three Kingdoms XIV — Guides and features hub