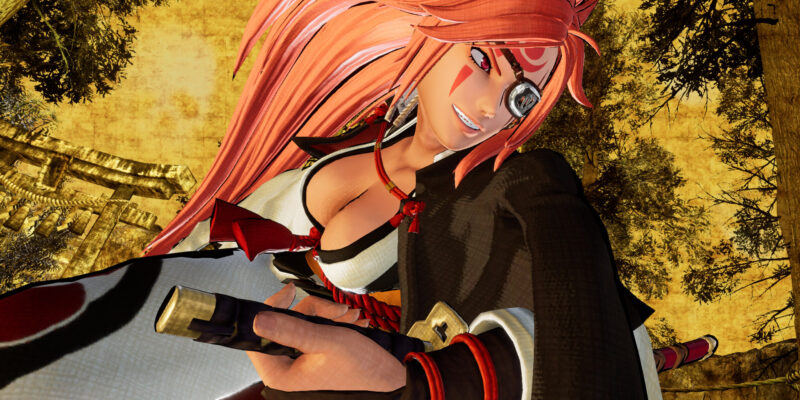 Late last year, the developers of Samurai Shodown revealed the roadmap for the third season of post-launch DLC. Included in it was returning character Cham-Cham, Hibiki Takane from The Last Blade 2, and the original final boss of the series, Shiro Tokisada Amakusa. But even back then when the season was first announced, we knew that a special guest character would show up. For the first time ever, SNK would collaborate with Arc System Works to have a character from Guilty Gear join Samurai Shodown. Today we finally got that reveal for one of the coolest crossovers in quite some time. Baiken is about to join Samurai Shodown, and there’s a brand new trailer to get you hyped.

From the beginning, only two characters really made sense for this crossover. The first was Baiken, and the second was Nagoriyuki, one of the brand new characters from Guilty Gear Strive. A seemingly immortal samurai vampire, Nagoriyuki also plays very similarly to a Samurai Shodown character. He relies more on single, heavy strikes than multiple hit combos. But Baiken is easily the more popular of the two, and one of the most popular characters in all of Guilty Gear.

Since Baiken isn’t in Guilty Gear Strive (not yet anyway) this version of her is lifted from her incarnation in Guilty Gear Xrd REV 2. Baiken looks great and has adapted to the art style of Samurai Shodown extremely well. She has also carried over most of her moves from Guilty Gear. In the Baiken Samurai Shodown trailer, we get to see her tatami mat, arm cannon, and flail, which can use to bring her opponent close to her.

Considering how counter heavy Baiken already was in the Guilty Gear series, she fits the slower, ground-based gameplay of Samurai Shodown perfectly. She also seems to have slightly more combo potential character than other characters, which is fitting considering where she comes from. Baiken will be available for download on August 19. You can get Samurai Shodown as well as the third season pass right now on Steam.

Since Baiken is the last character confirmed for the third season, it is unknown whether the game will get a fourth season. It is very possible that the game might be winding down. Especially since development resources are most likely shifting to The King of Fighters XV.