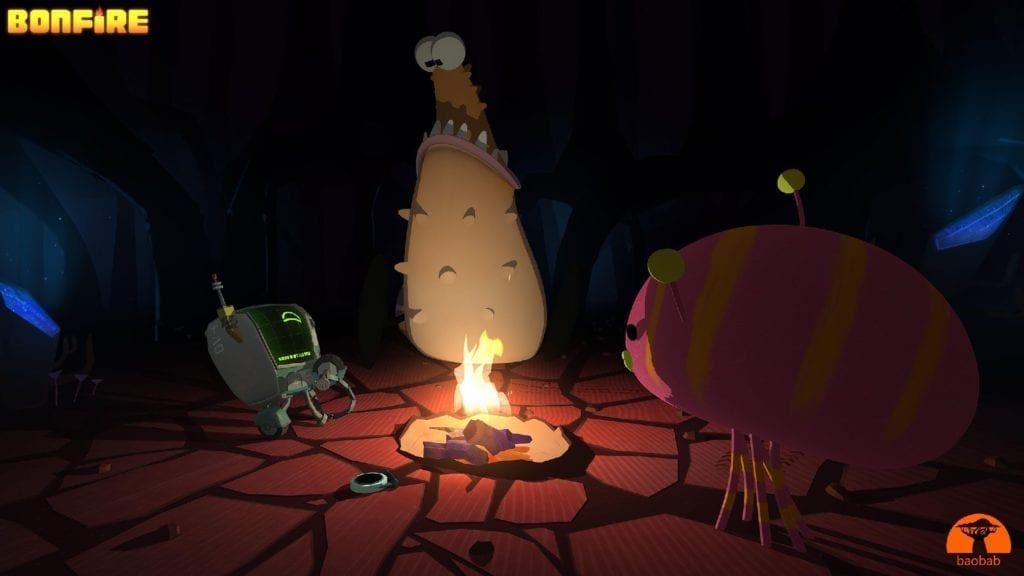 Although the hype around virtual reality (VR) entertainment has slowed in recent months, it’s clear that the technology is just getting ramped up. This is clearly exemplified in Baobab Studios’ latest interactive movie, Bonfire, which premiered at the Tribeca Film Festival’s Immersive exhibition this year. With Madagascar director Eric Darnell at the creative helm, Baobab made its debut with the short VR film Invasion in 2016. Since then, the animation studio has made major strides in interactive technology while featuring the vocal talents of Hollywood actors and musicians such as John Legend in the process.

Playing By The Bonfire

Bonfire includes the voice of comedian Ali Wong, who plays Debbie, a robotic companion that is a cross between an old-school cathode-ray TV screen and vending machine on wheels. Earth is a wreck – “all used up,” as some might say – and you’re one of several hundred scouts sent into deep space in search of a new habitable world. By screwing around with the multitude of unmarked controls, you happen to crash land on one. But before you can call the colonists in, you must tame some of the indigenous lifeforms on the planet. However, all you have is a campfire, your robotic companion, and your wits to survive. 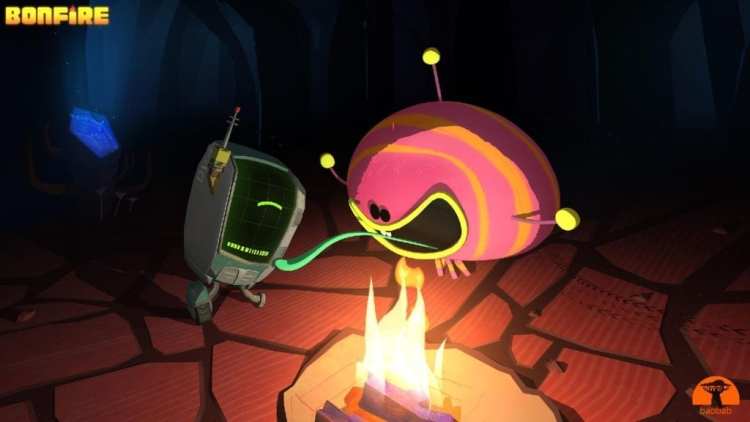 Wong gives a fantastic performance that is both funny and relatable. Her acting is backed by equally incredible technology that uses artificial intelligence to react to the viewer’s decisions. For example, Debbie dispenses some marshmallow-shaped food rations at one point, and her next line depends on what the user does with them. Throwing the marshmallows into the fire gets a different response than eating them right away.

Similarly, the indigenous creatures will react according to players’ choices, especially if they decide to play fetch. The creature may be scared at first, but earning its trust will get it to run around to bring back whatever the user throws around. In other words, the creature has a memory and will dynamically change its behavior accordingly.

Baobab CEO and Bonfire executive producer Maureen Fan told PC Invasion that the studio borrowed from a concept in comedy called “chunks and bits” to power its AI behavior. Chunks are the concepts, and bits are the jokes that go in them. These elements form a tree-like structure. The chunks will change the order of the bits that play out.

Other interactive features include choosing your favorite marshmallow flavor from the menu, turning the radio music on and off, and a major choice at the end. All of it builds up to an experience that is almost completely unique to each user. 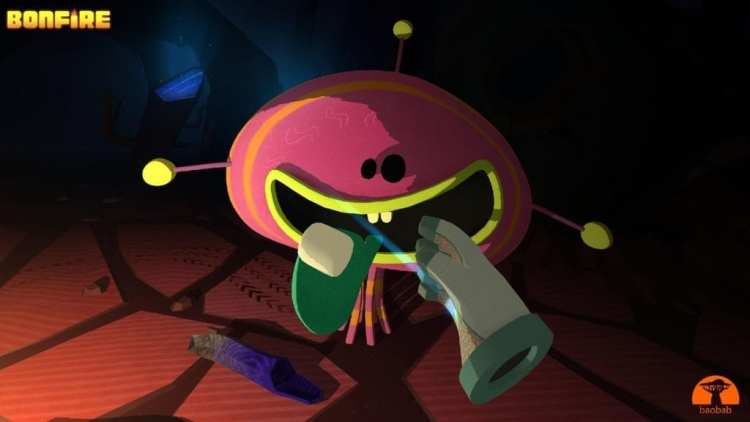 The film is around 15 minutes long and takes place almost entirely while sitting next to a campfire. That doesn’t seem like much, but it packs a ton into a short amount of time. While Baobab’s earlier animations were pretty much 360-degree videos, the studio has been pushing the boundaries of interaction with each new release. With Bonfire, Baobab is taking a big step closer to being a kind of video game studio without quite crossing the line.

Previous films such as Crow: The Legend, starring John Legend, Constance Wu, and Oprah Winfrey, include a degree of interaction. But Bonfire marks the first time the viewer serves as an actual character and directly impacts the narrative. Fan explained that Baobab is developing deeper interaction so that players will come to care more for the characters and the story.

The experiment appears to be a resounding success. In fact, I was a little saddened when the film came to an end. It’s clear that Baobab will need to continually walk the line between being an interactive film or a full-on video game as it creates future experiences.

“Every piece we’ve been doing has been short because VR isn’t hugely mass market yet,” said Fan. “So, for us, the most important thing is to learn. By creating these short pieces, we can test out different hypothesis and designs instead of building a big piece over three years. This way, we can iterate faster.”

The Next Steps For Virtual Reality

Bonfire also represents, perhaps more so than any other Baobab VR film, the incredible potential VR entertainment has to offer. By casting the viewer as the main character of their own interactive film, the experience achieves a level of immersion that matches or perhaps surpasses 2D shows like Black Mirror Bandersnatch, which premiered on Netflix last year. In fact, it wouldn’t surprise me if Baobab’s next project pushed the boundaries of interaction even further by using branching storylines based on player decisions.

Much of the enthusiasm around VR may have calmed down in recent months, but Baobab expected the slowdown. The company believes that interactive entertainment will take off in a big way in the future, and it is preparing for it by providing a library of quality experiences for viewers to enjoy. However, it is also supplementing its films with other media, including a 2D version of Crow: The Legend on YouTube in addition to a related augmented reality experience.

Bonfire will be available this spring on Oculus VR platforms, with plans to eventually expand to other headsets.

Close To The Sun Review – So Close, Yet So Far