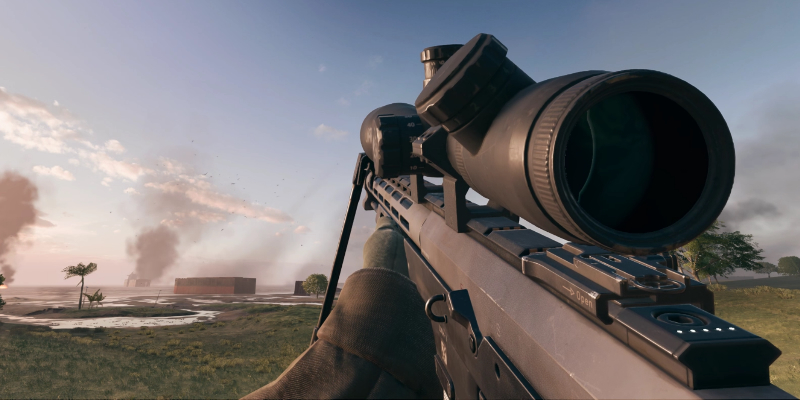 Sniping in Battlefield has always been an art that is hard to master. The slow bullet velocity forces players to lead their shots more so than in any other first-person shooter. It can be frustrating to get used to, but the payoff is incredible. Of the snipers in Battlefield 2042, arguably the best to use is the DXR-1. Here’s the best loadout for getting the most out of it.

There are a few decent optics for snipers in Battlefield 2042. Personally, I find the BKS 8x yo be the best overall, as it provides a nice level of zoom while hardly affecting the DXR-1’s aim-down sights speed. However, this much magnification can be tricky to use in short-range gunfights that aggressive sniper players may find themselves in. For this playstyle, it is better to opt for something less zoomed in, like the M11 6x or Raven 4x.

Regardless of your preferred playstyle, the High-power ammunition is a must. This ammunition type provides the least bullet drop, which makes it easier to line up headshots at longer ranges. As with all snipers in Battlefield 2042, the bullet drop on the DXR-1 isn’t that strong anyway, but it doesn’t hurt to reduce it and maximize your odds of hitting shots. Continuing the theme of improving the DXR-1’s effective range, the Extended Barrel is a fantastic attachment at the cost of the rate of fire it drastically increases bullet velocity. Faster traveling bullets make it easier to hit moving targets, and punish players who leave themselves exposed for too long. This is probably the most important attachment to unlock if a slower, traditional sniper playstyle is adhered to.

The underbarrel picks itself, as there is only one option on the DXR-1. The stock Factory Mounts serve as a bipod that can be deployed by either proning or crouching nearby a surface of appropriate height. This isn’t too important, but it has some niche uses when trying to land some particularly tricky shots. Any players who struggle with the aim sway when trying to headshot enemies may find it beneficial to prone more often and take advantage of this integrated bipod. No weapon benefits more from the use of a secondary than a sniper rifle. That is true of all three Battlefield 2042 snipers, DXR-1 included. Its slow fire rate makes it tricky to use up close and can leave you vulnerable to flankers. Being able to switch to a suitable secondary is important to make it possible to survive these situations. All three of the pistols are viable, but I’d recommend one of the semi-auto handguns like the MP28, as they are more forgiving.

The best gadget to use depends on playstyle but for the sake of this guide, we are going to make this a true sniper loadout. For sniping alone the Insertion Beacon is the best gadget as it allows the placement of a mobile respawn point anywhere on the map. This is fantastic for securing an area of interest and not having to run all the way back to it after every death.

HDMI 2.0 is seemingly being renamed to HDMI 2.1

Ubisoft confirms that a Splinter Cell remake is in the works

By Jack Salter14 hours ago
Guides

By Jason Venter18 hours ago
Guides