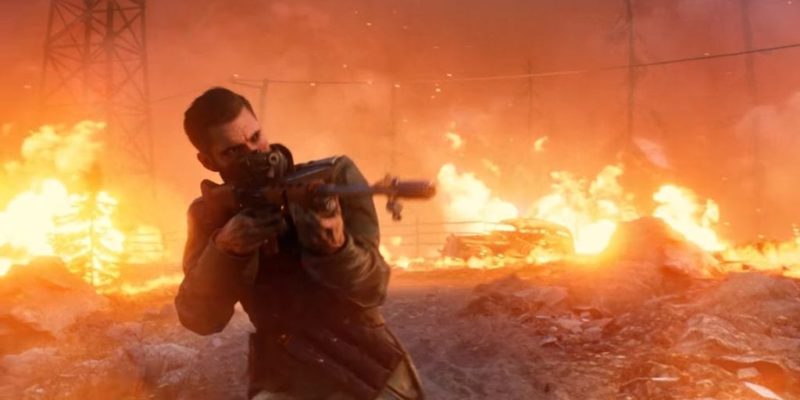 The long wait for Battlefield V‘s battle royale mode, Firestorm, is nearly at a head. Starting on March 25, you and your squad will be able to drop into the “largest Battlefield map ever” to shoot, loot, and hopefully survive.

Firestorm has all of your typical battle royale trappings. You can play the game solo or in a squad of up to four. Starting off, you paradrop into a world surrounded by an encroaching ring of fire. On the ground, it’s a struggle to find the best gear and shoot your way to the top. Matches consist of 64 players, so don’t expect a quick victory. According to leaked footage from last week, weapons come in three rarity types. You scavenge backpacks to store your loot, but you can only carry so much ammunition. So, naturally, inventory management is key.

There are, however, some very Battlefield-esque additions in Firestorm. If you’re downed by enemy fire, you’re not out. On the ground, you can fight back with a side arm while waiting for a revive. Also, the mode has many vehicle types, up to 17 in all. And yes, there’s a freakin’ tank. Because why not?

From the trailer that dropped today, you’ll need to find and secure more powerful vehicles. The trailer shows a team of four slowly opening a large door that leads to a tank. Securing a vehicle that powerful will likely not come without a fight. And although tanks can raise hell, they’re still vulnerable. Not only will roaming around in a tank reveal your location, enemies may have weapons or explosives that can deal with such a threat. Oh, there’s also a tractor. But it’s pulling a really big gun.

There are other Battlefield elements coming to Firestorm. Generally, in most battle royales, fighting from building to building requires patience as you wait for your foes to pop their head out. Not so, here. Thanks to the Frostbyte engine, structures can be destroyed with explosives. In the trailer, we see both a tank devastating a house and another team calling down an air strike. There will also be multiple objectives to complete. Claiming said objectives rewards you with powerful loot, as well as the aforementioned flare gun.

Firestorm for Battlefield V will go live on March 25. EA plans on implementing more features post-launch, such as a duos mode in April. Check out the official page for more.