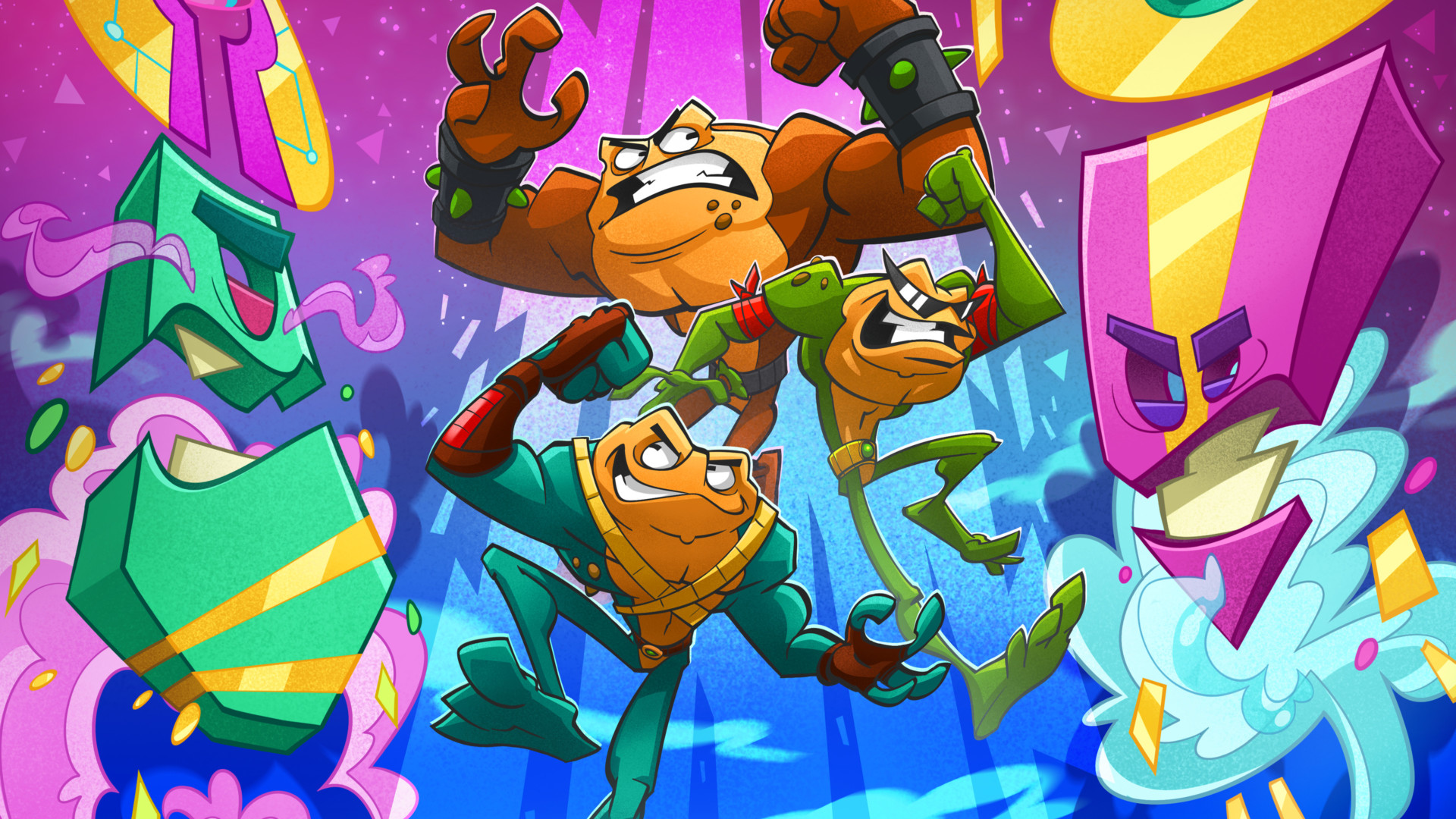 Like many, I was taken aback by my initial glimpse of Dlala Studios’ Battletoads reboot. The gritty style of its forefathers, featuring anthropomorphic toads angrily grimacing from the cover art, was the epitome of ’90s cool. Dlala instead swung the pendulum to the other end of the spectrum, opting for the more modern era of cartoon visuals. Bright colors and exaggerated animations define the new ‘Toads. As an old fan of the gritty Rare brawlers, I experienced a sudden uncomfortable kinship with those who complained about Teen Titans Go! But, no matter. So long as the spirit of the once-popular beat ’em up franchise survived, I’d be content. And it did, at first.

The opening act of Battletoads will deceptively leave many older fans at ease. When it came to what made the classic ’90s brawlers great, Dlala seemed to have nailed the basics. Combat — fast, nuanced, and crunchy — is balanced out with genuine laugh-out-loud moments. And that’s not even mentioning the soundtrack. Starting off with the acclaimed pause music, the game kept the jams coming with excellent remixes of the classic tunes.

The fully voiced and animated cutscenes following each chapter were a surprise. However, I quickly warmed up to them. After the tutorial, the story starts as the ‘Toads emerge from a bunker after 26 years. Discovering to their horror that they were no longer famous and had to take menial jobs is the kind of fourth wall-breaking humor I love. Pimple convincing himself to apologize to an assumed burglar for being poor, followed by Rash’s descent into madness, were moments that had me rolling. 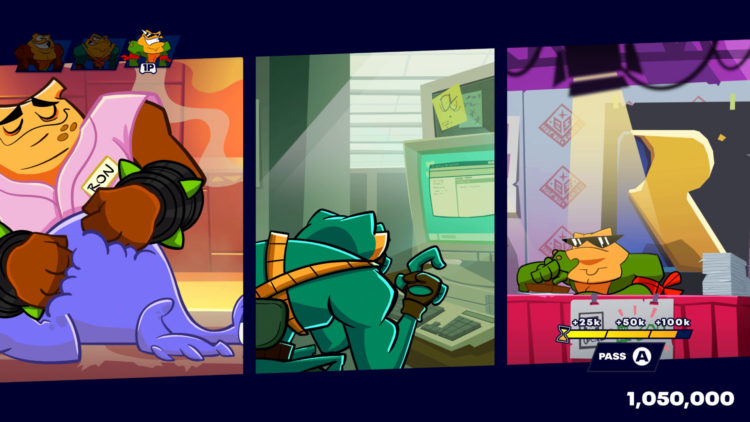 Indeed, I was fully onboard this new Battletoads train. I prepared to tell fellow colleagues and ‘Toads fans that it appeared the boys in green were back. Sadly, my enthusiasm dwindled not long after the promising reintroduction.

Fly in the ointment

As a series, the Battletoads games never shied away from subverting the genre, and the reboot does too — sort of. Although they were technically beat ’em ups, the original games were peppered with diversity. When you weren’t putting Big Bad Boots to pig butts, you raced on vehicles and shimmied up giant snakes — challenging your reflexes and platforming chops. The Battletoads reboot naturally includes a speeder bike level which is fun and challenging, if a little too long.

However, not all of the game’s other, newer ideas mesh nearly as well. In one level, progress is occasionally halted for bizarre and rather dull door-hacking minigames unfortunately coupled with cheesy hacker lingo. If I hear “gonna need another Zitz blitz” one more time I’m going to scream. Toadshambo, the game’s take on rock-paper-scissors but with toasters and musical instruments, felt equally pointless. I don’t think the game’s third act included any foundational combat at all, opting instead to swap from a bullet hell shooter to a series of plodding box puzzles and lethargic platforming. It all culminated in a set of reflex-intensive quick-time events straight out of mobile games, followed by a puzzle sequence so baffling at first glance that I forgot what I was even playing. 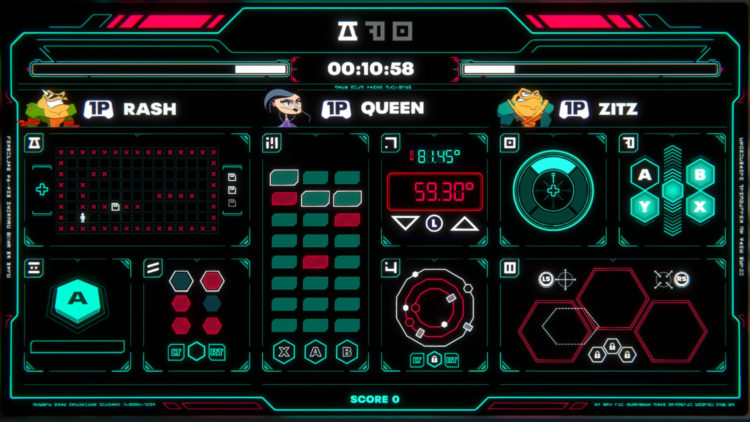 What the hell is going on.

To be fair, I enjoyed the shooter sections. However, I can’t help but think they were included to make sure you didn’t fall asleep after pushing the umpteenth box onto another door switch.

If it wasn’t clear, Battletoads peaks early before slowly rolling into mundanity and tedium. It even seeps into the story. While the cutscenes offered some hearty chuckles, I often went from laughing to shifting in my chair wondering why this particular scene needed to be nearly five minutes long. Taken with the third act as a whole, so much of the game feels like pointless fluff. Just more filler to stretch out the game’s four-hour runtime.

The meat of the game is the combat, which isn’t as difficult as its predecessors. Battletoads can be tough, but pales in comparison to the 1991 original. The reboot does away with lives and continues, opting instead for checkpoints throughout levels and during boss encounters. Rather than following in the lead of Streets of Rage 4, Battletoads includes an entirely new combat engine. Each ‘Toad plays differently as well: Zitz is weaker, but has faster attacks; Pimple is massive, slow, but hits like a truck; and Rash fits nicely in between. Your repertoire includes jabs with uppercuts, mid-air combat, and guard breakers. 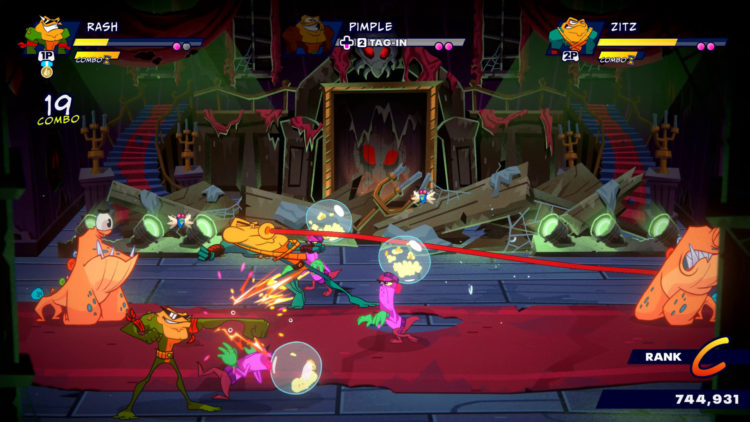 Licking aliens is now part of the usual fights.

It’s quick, animated beautifully, and more complex than you think. Enemies can be knocked into the air and juggled, and you can whip out your tongue to pull enemies close or pick flies out of the air for health. There’s also a dash to jet around the arena. You can quickly swap out which ‘Toad you’re playing, and if timed correctly the exchange can continue the combo. Once you you find your fighting rhythm, throwing hands with rat monsters and hostile aliens is a blast.

Meat for the grinder

However, combat isn’t without its own frustrations. To be clear, said frustrations don’t lie with the difficulty per se. The original games were hard as hell but mostly fair. The reboot shines when there are only six or fewer enemies onscreen, allowing you to plan your assault. However, at times the game fills the area, combining the usual fodder with foes that can’t be stunned and occasionally hurl projectiles that knock out an insane amount of health.

For the most part, the most damaging enemies have tells that are clear enough for you to dodge in time. However, when there’s so much happening onscreen you can be forgiven for not noticing the flying ax that blended into the chaos. Combo-ender animations also go on for way too long, leaving your warty, green ass vulnerable for a thrashing. Granted, I could dash out of most animations, but I was usually watching along for oncoming threats nearby, not that damned snowball. Included in your kit is an ability to spit out a wad of gum to temporarily stick enemies in place. You only have two shots before needing to recharge, however, so you better hope you stick the biggest threats. If not, then too bad. On that subject, I wish the game showed how much gum you had somewhere other than below your health bar. 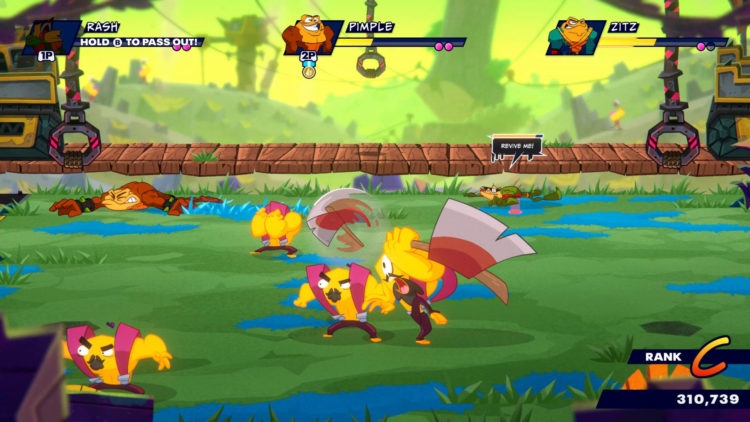 Downed and nearly out.

You’re out of the best friends club

You’d think a friend or two joining as co-op partners would alleviate some issues, but that’d be wrong. Another body in a fight only adds to the dizzying spectacle you have to parse. Losing all your health in co-op puts your ‘Toad in a downed state, requiring a partner to rush over for a revive. It’s quick, but trying to pull off the life-saving technique seems to take more luck than timing. In addition, adding a friend changes some of the minigames. For example, all players are presented with their own hacking game that relies on the actions of one another. And when one person messes up, it starts all over. It’s not fun.

With most games, the addition of co-op play enhances the overall experience. Battletoads, however, proves that there are exceptions to the rule. Also, in an odd move, the game does not support online multiplayer; it’s couch co-op or nothing. I will, on the other hand, give credit to the bullet-hell section, in which one player controls the ship while the other fires. I won’t lie, that was great. 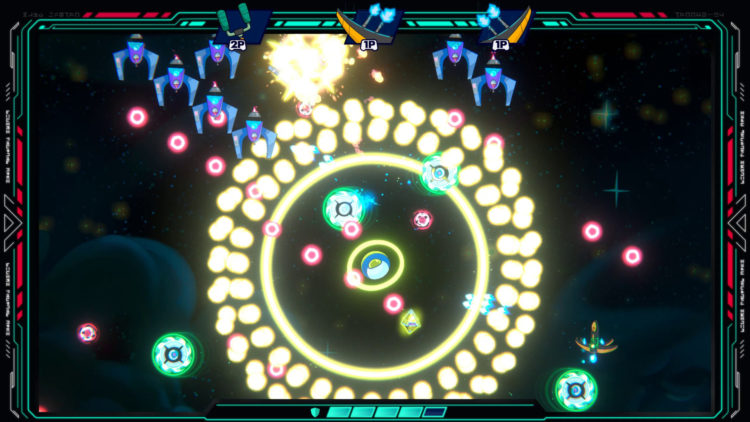 An odd inclusion, but at least it’s fun.

Queen for a day

The overall style of the reboot grew on me after the first hour. The Battletoads are nicely animated and distinct in their personalities. Each level is meticulously detailed and colorful, ranging from an abandoned theme park to woods on an alien planet. 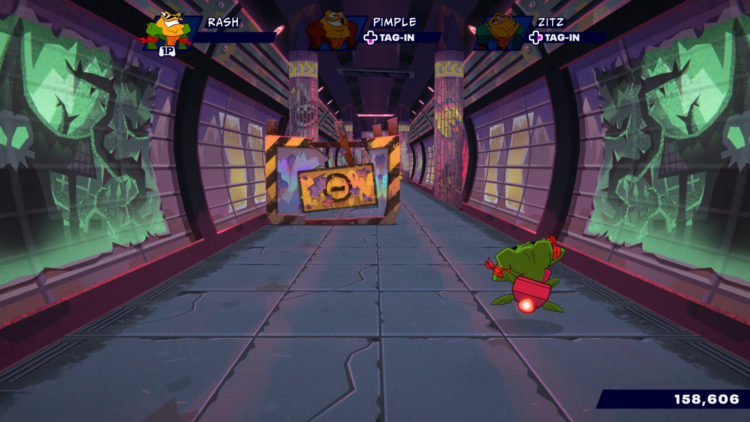 The game mostly runs well, save for a few hiccups. On PC, I noticed some odd graphical glitches with the score cards following missions, but they were minor distractions. I did have a crash during a cutscene, but only one. Battletoads recommends using a controller, and I wholeheartedly echo that suggestion. The keyboard controls are all over the place, adding an extra layer of frustration to the combat. Occasional quick-time events use the mouse, and it was just too unwieldy for my liking.

Are they brothers? I need to know

Despite its flaws, Battletoads is far from a loss. After some needed tweaks, the game may warrant a sequel or two. And I’m ‘toadally’ down with that idea. If Dlala Studios can tighten up the combat and come up with better minigames than tired door-hacking tropes, then moving into a fully rebooted trilogy is something I’d look forward to playing. Of course, the Battletoads don’t need to go forward alone. I hear the Drouble Dragons are looking for work.

Battletoads is a reboot of the classic Rare franchise, but fails to recapture the excitement and fun of the originals.