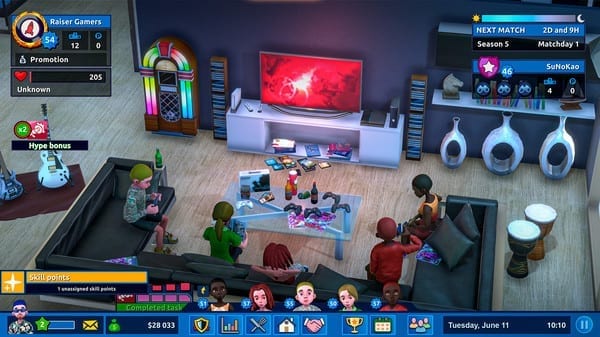 In Esports Life Tycoon, players become the CEO of an esports team and are tasked with creating a team of superstars to compete in tournaments across the globe. And today it was announced that the game has been released via Steam Early Access with a limited time discount.

The developers at U-Play Online have mentioned their reason for putting the game into early access is because they’re trying to mix traditional Tycoon mechanics with Manager elements. Their goal is to perfect the combination by working with players to obtain feedback on how to improve the gameplay.

Additionally, Esports Life Tycoon has already gained a fair amount of traction from the community. With a Discord filled with over 5,000 excited fans, U-Play is thrilled to work with such an engaged audience. When they released Esports Life Tycoon for closed beta, they had 4,000 members. U-Play even decided to enshrine five beta players into the final game as NPCs.

From gaming noob to esports tycoon

When entering the world of Esports Life Tycoon, players will have one goal: become the greatest esports team ever. From developing team crests to equipment designs, not to mention avatar and team player creation, the game intends to offer a wide variety of customization.

You will need to hire players and negotiate contracts to obtain talent from other teams in order to build a superstar team. Scouting and making difficult trades will be part of the team building aspect as well. Esports Life Tycoon goes past just hiring team talent, also allowing players to hire everything from coaches to marketing managers and psychologists. In addition, players will have to ensure their team has a healthy lifestyle and adequate time for team bonding. After creating the perfect team, players will compete in the arena, where their fruits of labor will shine – hopefully.

As of right now, the developers have yet to announce a full release date. However, those eager to try can obtain the early access version through the game’s Steam page.