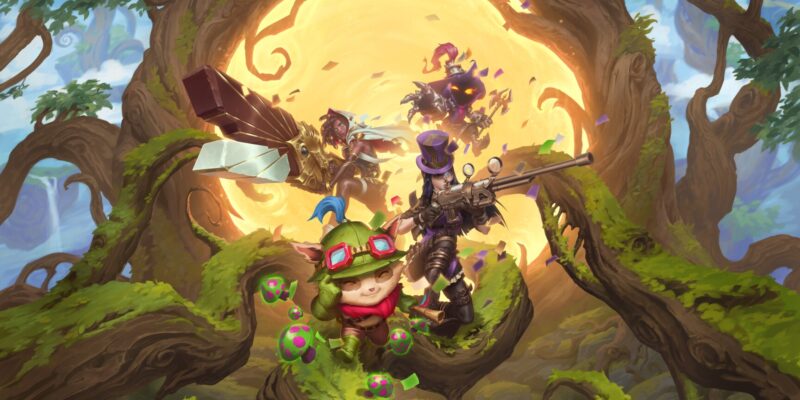 Today, Legends of Runeterra fans got something that they have been waiting a long time for. It has been known for a while now that after the most recent region, Shurima, we would be getting one more for the game. This doesn’t mean support for the game is ending — far from it, actually. But as far as new regions go, this next one is the last. The new Beyond the Bandlewood trailer that dropped today gives our first look at this new region, the home of the Yordles.

The trailer starts off with a very distinct art style reminiscent of something that you’d see on a Disney show. It could be something akin to Adventures of the Gummi Bears or even The Smurfs. The art style represents the Yordles, the small, furry group of beings that Teemo belongs to, perfectly. A young Yordle named Ava is sent by Teemo to gather supplies for the Bandlewood Festival. This leads the young Bandle Scout on a guest to find what she needs, but to no avail. After finding a magical tome that sends her to a location much more familiar to fans of Legends of Runeterra, she is helped by a stranger to her next destination.

As stated before, despite this being the last region coming to Legends of Runeterra, more expansions and champions are still coming to the game. Beyond the Bandlewood itself will feature 126 brand new cards, as well as nine new champions. Some of which we can see briefly in the new trailer. There will also be new multi-region cards, which sounds exciting for new deckbuilding possibilities.

There will also, of course, be new keywords and mechanics for many of these new cards. We don’t know what these new keywords are yet, but they are said to be centered on Bandle City’s spirit of whimsy and discovery. As it says in the description under the Beyond the Bandlewood trailer, the set will release soon on August 25. There will be more animated shorts featuring Ava before then, fleshing out the backstory of the set.

Card previews have started today and will continue until the set releases. Teemo, Fizz, Lulu, and Heimerdinger have all received new art and are now multi-region cards. The first new card of the set is The Bandle Tree, which is sure to be great in many meme decks. In the meantime, you can download Legends of Runeterra right now for free to get ready.