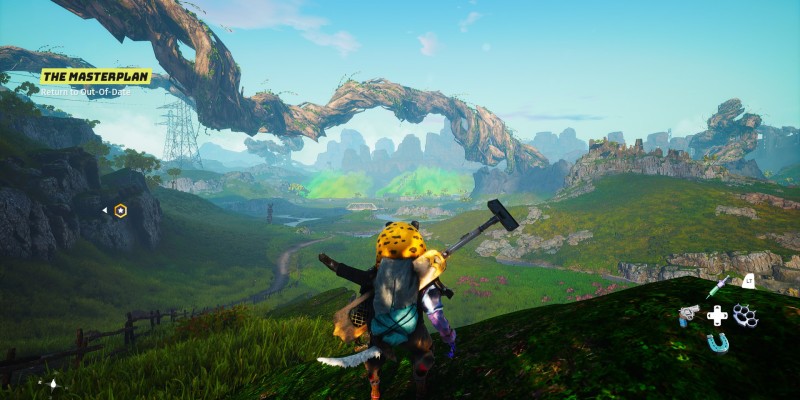 The amount of money it must take to create a large, beautiful world with high-quality assets is nothing to sneeze at. Not just the investment, but the required amount of work is simply enormous. This is why I always find it strange when games containing said worlds half-ass everything else. Aside from its questionable use of fog to obfuscate distant views, Biomutant is gorgeous. The lush, vibrant foliage, the sweeping plains, the streams and hills, they’re all lovely. But everything else is purely mediocre at best. It’d be a stretch to call the game awful, but it’s so middling (or worse) in every non-visual aspect that it’s hard to paint it as anything less than a glaring missed opportunity.

The worst thing about Biomutant by a mile is its narrative, though. You create a furry critter who lives on a post-apocalyptic Earth that has been polluted to death by an evil corporation named Toxanol. The game thinks it makes a powerful statement by repeatedly mentioning how bad pollution is and, well, no shit. We don’t learn anything about the company or how things got that bad, but they were evil and they killed humanity somehow. Earth is now occupied by mutated animal people instead of humans.

Your main character was raised by their mother, a master in the underexplained martial art known as Wung-Fu. However, the village was attacked by an underdeveloped villain named Lupa-lupin, who killed the protagonist’s parents. The game is barely about that, though. Instead, the Tree of Life is threatened by four kinds of weak monsters called World Eaters, and you need to kill them all. Why is there a Tree of Life? Where did it come from? Who knows, but the World Eaters are destroying it or something, and the Earth will die if they’re not stopped. Finally, there’s an ark you’re meant to populate to safely leave the planet in case it’s destroyed. In case you’re confused, yes, Biomutant immediately concerns itself with three separate narrative threads and does absolutely nothing to tie them together in a satisfactory way. 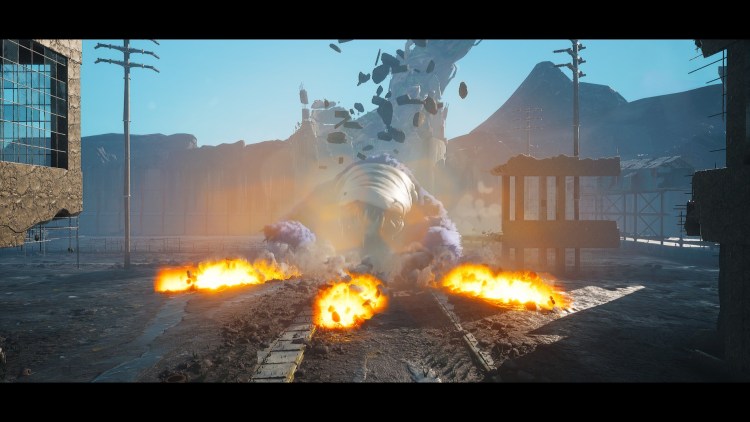 It goes without saying that the narrative itself is a mess. It’s built out of trite clichés with no depth or anything of interest whatsoever. The animal people speak in gibberish and, instead of just subtitling the gibberish, every line of dialogue is translated by Biomutant‘s endlessly annoying narrator who never shuts up. Story sections are tedious, boring exercises in gibberish followed by badly written exposition delivered by the narrator. He doesn’t do a bad job, to be frank, but the writing is grating.

To put it bluntly, I’m very tolerant of bad stories and awkward dialogue. The Room is one of my favorite movies. Before Biomutant, I had never played a game where I felt the burning desire to move past most of the dialogue as quickly as possible, but I did here. I was actively unhappy during these sequences and needed them to be over as soon as possible. They’re torturously boring. It doesn’t help that the game has such a simplistic, basic outlook that absolutely doesn’t require as much talking as it has.

There are no interesting characters. There’s just pretentious, long-winded rambling from characters that almost exclusively send you on bland, forgettable fetch quests. No one is actually important or memorable. It doesn’t help that Biomutant has the very best morality system that 2002 had to offer. You can either choose the goody-goody response, or you can be an evil dick. Literal black and white creatures show up and have generic, annoying angel-and-demon conversations with each other when you make choices, which lead to you having a light or dark aura. Having one or the other dictates a short cutscene at the end of the game and which useless powers you have access to. 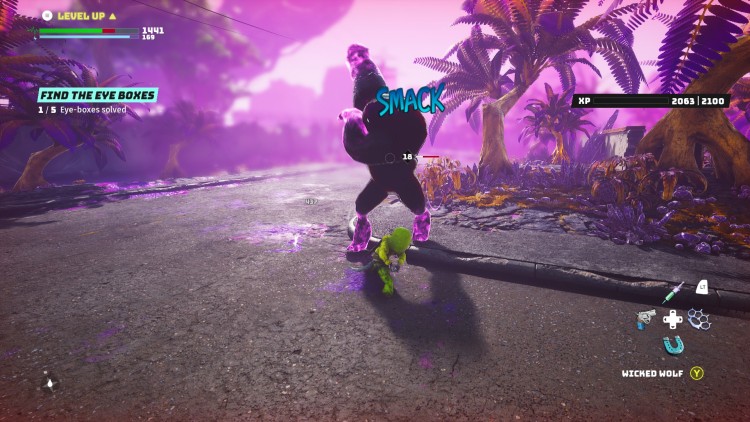 Biomutant‘s game structure is almost offensively simple. There are four World Eaters. You need to kill them. The game’s hideous, boring main quest giver is called Out-of-Date, and he sends you to assist four of his associates to take down each World Eater. All of them have access to a machine or creature they can outfit to fight each monster, but they need a few fetch quests handled before it’s ready. For whatever reason, they are all incapable of handling any of this themselves and are happy to risk the future of the world while they wait for you to show up and kill the monster. Most of the boss battles suck, though. The damage balance is off on some, they drag on too long, and they’re dull as hell.

Pretty much all of Biomutant‘s story quests are tied to fighting them. The story is insanely short and can be brute-forced in just a few hours if you ignore the game’s tedious, pointless side content. The world is large and you can explore to your heart’s content. The lone non-visual compliment I can give the game is that navigation is competent, and I didn’t dislike it. There’s a loot system at play here, but 90% of what you find is always garbage and the game is so simple that you probably won’t want to bother much with crafting or upgrading to begin with.

Side quests almost all boil down to, “go and do a similar puzzle to activate an old appliance.” For instance, there are five washing machines, five projectors, five microwaves, etc. to find. Icons show where they are on the map and you’re meant to go to them and solve eye-rollingly simple puzzles where you match two colors. Your reward is an item you’ll probably never use. I put over 20 hours into Biomutant and practically every sidequest was a meaningless waste of time. 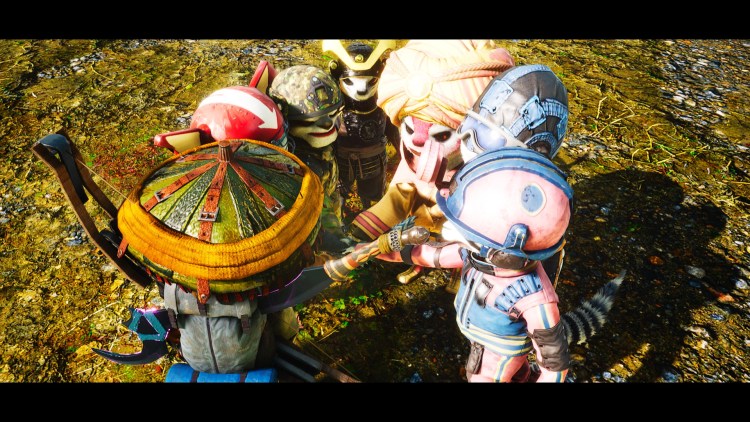 Much of this would be somewhat excusable if the combat was fun, but it’s as basic as possible. You can choose from one of several weapon types, but you’ll mostly just run up to foes and mash the attack button until they die. Enemies have a warning appear over their head when they’re about to attack, which you can use to parry and then do a lot of damage. But the combat is mindless, even if it is functional. You have melee weapons and guns, but there’s just nothing to either. You hit or shoot things until their health bar empties. Neither feels particularly impactful either. Guns feel like they do nothing, and melee attacks feel unresponsive and disconnected. Biomutant sort of feels like Batman Arkham combat, but slower and not satisfying.

You have access to two suites of abilities that you purchase with different currencies, but the abilities are, much like nearly everything else you obtain in Biomutant, mostly useless. You bind the abilities and use them in combat, but almost none of them are any better than just wailing on foes. One does let you turn foes against each other, which is handy when the game throws a whole mob of them at you at once, which it does often. I did the light path and unlocked the ultimate attack, which is a lightning blast that does decent damage. But I barely used it and just kept hitting things because it simply wasn’t all that effective or fun. You can also buy Wung-Fu attacks that you can add as specials to your combos. Unfortunately, there aren’t many of these, and a lot of them are not especially useful.

Both melee and ranged weapons can be crafted, which I do recommend occasionally, because you’re able to make weapons that allow you to quickly beat most anything to death within a short timespan. I only needed to make three weapons over the course of the game. You’ll also get unique weapons from the six tribes. You can join one and then subjugate all the others. All tribes need to be united to beat the game. Once you’ve joined one and conquered two others, Biomutant then offers the chance to just unite the other tribes right away. If you play this game, I highly recommend you take the offer, as it vanishes forever if you refuse it, requiring you to do the other three tribes the hard way. They don’t take long, but, just like everything else, the objectives are boring and rehashed. I regretted turning down the offer almost immediately. Plus, most of the tribe weapons kind of suck, save for the bow. 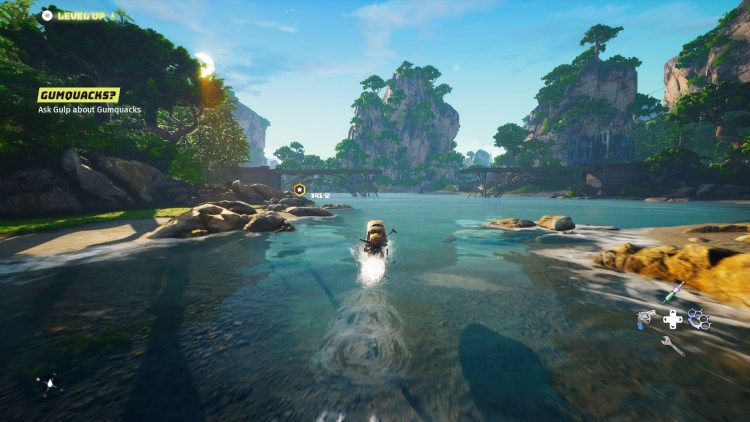 Once again, outside of the visuals, there is nothing good about Biomutant. It’s a boring, overly simple game that little kids might like, but I can’t think of a more insipid, uninspired open-world game. The narrative is abysmal, the combat lethargic, and the content is all weak and endlessly rehashed. The PC version’s optimization is also quite awful. Biomutant isn’t the worst game you’ll ever play, but it’s egregiously mediocre in almost every way, while occasionally unbearable in some others. I can only advise a hard pass.

Offensively mediocre in multiple ways, Biomutant is a waste of resources. It's not terrible, but there's no excuse for it to be this vapid and underwhelming.