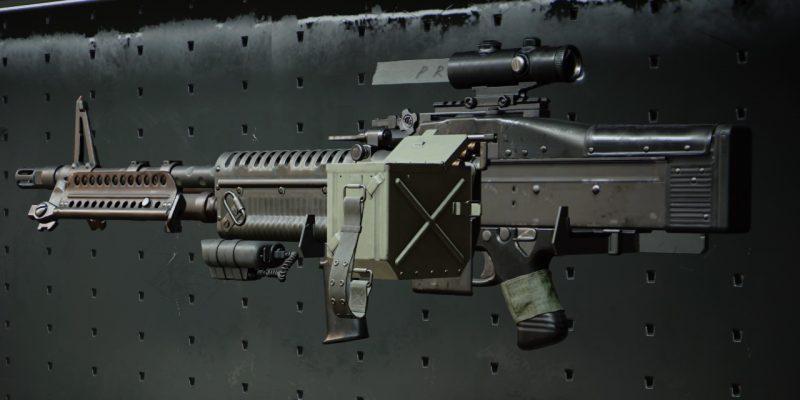 Honestly, the M60 can be one of Black Ops Cold War‘s most frustrating guns to use. And for a lot of players, it just isn’t going to be a good choice. Trying to run and gun with this thing is impossible and its default aim-down-sights time of 600 ms is borderline offensive. Not to mention its iron sights are incredibly clunky, it kicks hard, and it has the worst fire rate of the light machine guns.

But in true American fashion, the M60 performs best when scaled up and placed on a battlefield. Frankly, this thing sucks in regular six versus six. Don’t even think about using it on any normal multiplayer mode. But in Dirty Bomb and Combined Arms, it can perform far better than expected. You just need to play game modes that allow you to keep your distance from the enemy team.

I don’t tend to suggest Gunfighter over Perk Greed too often, but it’s the best overall choice with the M60. Black Ops Cold War‘s typical top-tier perks like Ghost and Ninja aren’t as valuable if you’re playing slowly. Ghost only procs when you’re moving around and masking your footsteps is pointless if you’re standing still. Because of this, I recommend building your M60 to be as strong as possible by using all eight available attachment slots.

As always, your choice of optic is a personal preference. In saying that, close-range optics like the various reflex sights are not great given the gun’s niche is all about long-range gunfights. I like the Axial Arms 3x as it’s easy to use and provides a clear line of sight. Some good alternatives include the Royal & Kross 4x, SUSAT Multizoom, and the AN/PVS-4 Thermal. 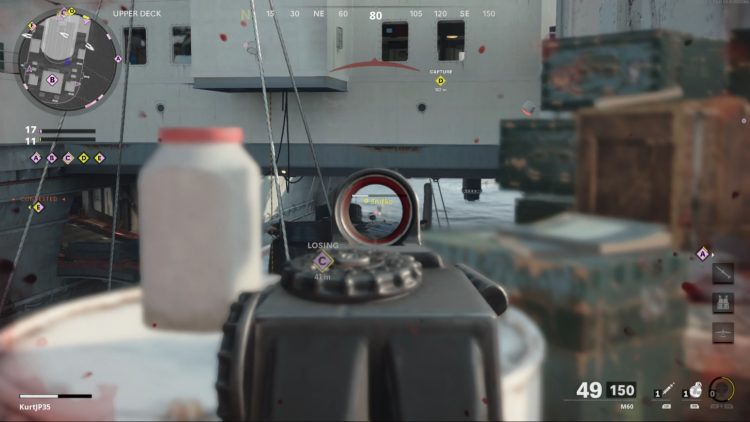 Slow, long-range engagement may not be for everyone but there is something strangely satisfying about dropping an enemy from hundreds of meters away. And if that’s your goal, few guns are better than the M60.

One of the most troubling aspects of the M60 is that it recoils a lot for a long-range weapon. Given that it’s essential you hit your shots even at extreme ranges, recoil reduction is our number one priority. The two attachments that are best for this are the SOCOM Eliminator and the Field Agent Grip. Like many of the M60’s best attachments, these both come with the con of making this build rather heavy, but there’s not a good workaround to avoid that. If you want a snappier, faster-handling gun, use an assault rifle instead.

The 22.8″ Task Force barrel is the only barrel worth using. The 10% damage increase isn’t substantial but the doubled range and bullet velocity feels great. That 100% increase to effective range drags our three-shot kill potential all the way out to 152 meters. That’s the most of any gun in Black Ops Cold War. Even the sniper rifles begin to suffer from damage falloff before this M60. This makes it a fantastic choice for counter-sniping and applying pressure to enemy snipers trying to pick you off. 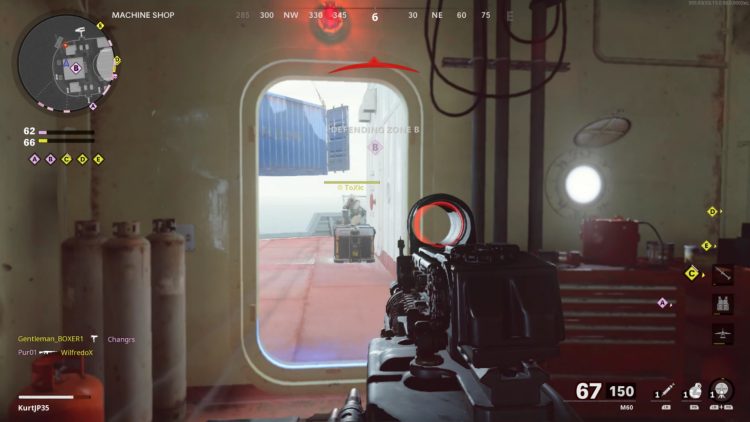 Getting caught out on a flank and having to reactively aim is usually a guaranteed death flag. The M60 is by no means one of Black Ops Cold War‘s most versatile weapons.

You won’t see me using a long-range gun in Black Ops Cold War without the SOF Target Designator. This attachment makes it so that when you’re aiming near someone, their name and an easily visible dot will appear above them. This is great for spotting enemies using head glitches or windows. When you do spot them, you will want to be able to maintain continuous gunfire. For this, I’d recommend the Vandal Speed Loader, which cuts reload time down by an incredible 40%. Unfortunately, it does hurt weapon handling even more and makes more aggressive playstyles a waste of time.

Regardless of play style, we don’t want this M60 build to feel too slow. At the end of the day, Call of Duty is a relatively fast-paced FPS, so having an M60 you can’t ever move with isn’t overly practical. To solve this issue, you’ll want to use the Airborne Elastic Wrap which reduces aim-down-sights time by 180 ms. That is the largest ADS improvement possible of any gun in Black Ops Cold War. As for your stock attachment, you’ll want to opt for either the No Stock or the SAS Combat Stock. The former is better for spraying up close and the latter is better for strafing left to right while aiming in.