This is not a picture of Alex Mayberry. Thought I’d better clarify that. 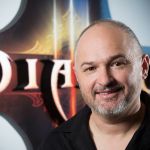 Mayberry has a fairly storied history within games development, having worked with a variety of developers over the last 18 years. He started as a level designer at Xatrix Entertainment, moved onto Electronic Arts and Kalisto, worked as executive producer and creative director on America’s Army, and then wound up as a Blizzard producer. At Blizzard, he worked on a number of World of Warcraft expansions, was also the lead game producer on Diablo 3, and did some work on the Diablo 3 expansion Reaper of Souls.

“As a long-time veteran of Blizzard he has an almost fanatical commitment to quality and playability, which makes him a great fit creatively,” said Cloud Imperium’s Chris Roberts. “He has a sterling reputation in the industry, having helped manage many successful teams and he’ll bring that same kind of winning style to Star Citizen.”

“Star Citizen is bold and ambitious, with a unique and innovative approach to game development,” said Mayberry on his new responsibility. “I am extremely excited to be joining the talented people at Cloud Imperium Games, and I strongly believe that together, with Chris Roberts’ direction and the support of the player community, we will set a new standard for AAA games.”

Star Citizen is Chris Roberts’ forthcoming crowdfunded space simulator thing. It has currently raised $43.6 million dollars, and by the time the game launches, I fully expect that it will have cost more than an actual spaceship.

Microsoft Announces Xbox One Without Kinect For $399